The Nokia 5800 XpressMusic, a mid-range music-focussed phone, was launched today in London. It is Nokia's first touch enabled S60 phone. It runs S60 5th Edition on Symbian OS 9.4, has a 3.2" nHD (360 x 640) touch screen, WLAN and 3G connectivity, a 3.2 megapixel auto-focus camera, integrated A-GPS and accelerometer and proximity sensors. To underline its music potential, the 5800 has a standard 3.5mm audio jack, stereo speakers, ships with a 8GB microSD card and will be one of the first phones to support Comes with Music (Q1 2009). It will be available worldwide in Q4 for 279 Euros (£215) before taxes and subsidies. Read on for much more.

The front of the device is dominated by the 3.2 inch nHD screen, there are three buttons along the bottom (right to left: end key, S60/home key, and send key) and a single button on the top right of the device which activates the media bar (a similar arrangement to the multimedia key on Nseries devices). The left hand side of the phone has a microSD card slot, the top of the phone houses a miniUSB connector, 3.5mm audio port, 2mm power port and the power button. The right hand side of the device has volume keys, a key-lock slider and camera capture button. The back of the device houses the 3.2 megapixel auto focus camera which boasts Carl-Zeiss optics and an accompanying dual LED flash.

The S60 5th Edition UI is designed to be used with either finger touch or with a stylus. While the UI has a familiar S60 feel, it has been optimised for touch. In portrait mode, two enlarged 'softkey labels' work as virtual keys for accessing menus (i.e. Options) and other common actions; in landscape mode, there are four virtual buttons (making up a toolbar) which do the same thing. On screen icons and menus all respond to touch interaction.

The familiar S60 applications are all available - PIM (Contacts, Calendar and Messaging), Media (Music player Gallery, Video centre, Web), services (Maps, Download!, Share online, Search) and a number of tools and utilities. Many applications have been optimised to take advantage of touch interaction and the extra screen space available. Web allows you to scroll around a page and select links using your finger, Calendar has a split screen view in landscape mode, Gallery lets you flick through media using your finger and so on.

The 5800 has a number of extra touch-related customisations. Firstly, the Media Bar, which gives quick access to the key multimedia applications. This is a drop down menu-bar that appears on the right hand side of the screen when you press the dedicated Media Bar key. Second is the Contact Bar (see image below) which lets you put your favourite contacts on your homescreen and displays information about them. Nokia call this a 'human interface that truly puts people first'. 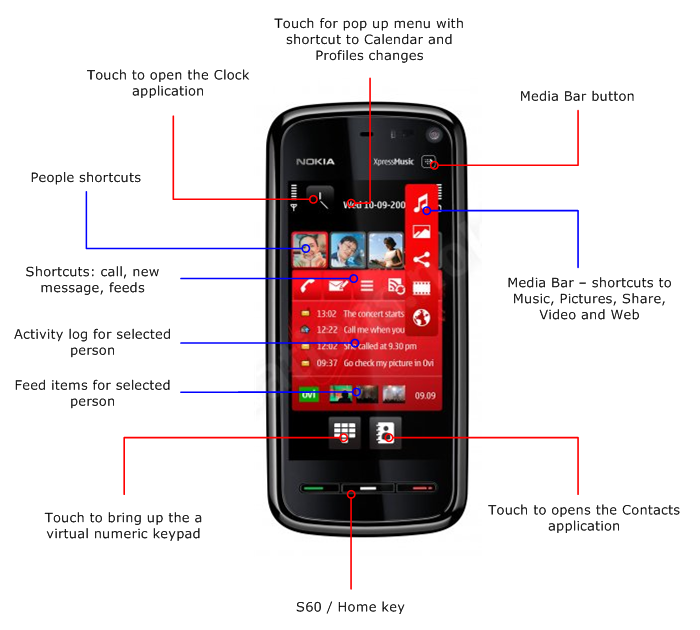 The Nokia 5800 XpressMusic will inevitably be compared with Apple's iPhone and T-Mobile's G1 Android phone. While a direct comparison does have it uses, it is also worth noting that the three phones all occupy different segments.

The 5800 is not a flagship device for Nokia; it does not have the Nseries branding, and this is reflected in its price point. Clearly the 5800 will receive attention as Nokia's first S60 touch-enabled phone, but the touch features are best seen as an enabler rather than a central function. Nokia has long regarded touch as something that is a feature that is built into the platform - as such the 5800 is not Nokia's 'touch phone'; indeed, from now onwards, we can expect to see numerous S60 devices, from multiple licensees, taking advantage of the new touch capabilities of S60. 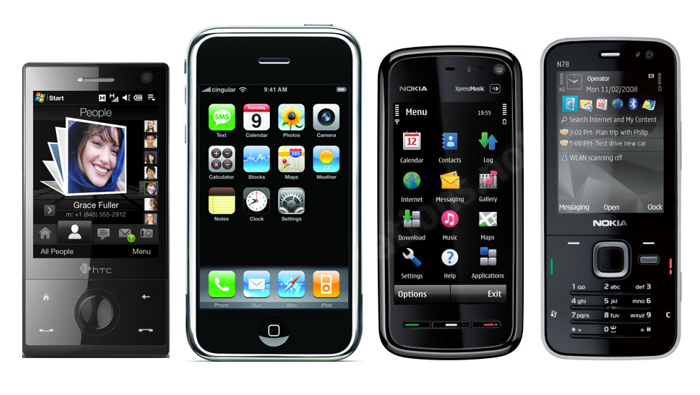 We'll be adding more information and publishing further coverage in due course.

Check back later for our hands-on impressions after we've got back from the launch event in London.

Please leave your questions in the comments thread and we'll do our best to answer them or get you answers from Nokia. 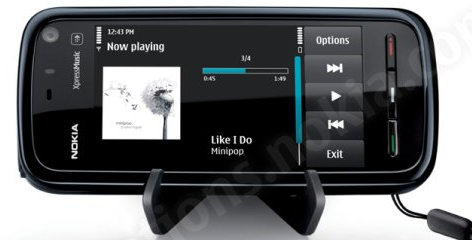