As something of a dabbler in PyS60, Nokia's open source port of the Python programming language to S60, I was excited to see the arrival of a proper book on the subject. "Mobile Python" takes a tutorial approach, leading you from the ubiquitous 'Hello World' right through to phone-controlled robotics and multi-player online games. It's a heady and sometimes uneven ride, but Mobile Python does manage to get across a lot of information while simultaneously firing the imagination of anyone who ever wanted to write an application for their S60 phone.

"Juergen Scheible, one of the authors of Mobile Python, new from Wiley, has been a leading evangelist for PyS60 since its inception, so he makes the natural lynchpin here. Ville Tuulos is a new name to me, but there are plenty of others from the Python and Symbian worlds who also seem to have made contributions here. 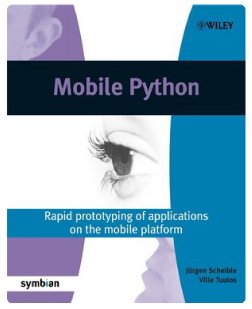 Mobile Python's subtitle is 'Rapid Prototyping of Applications on the Mobile Platform', but as with the earlier book on OPL, which had a similar title, a substantial number of Python programs will end up being THE applications, not just prototypes. It's important to get your head around the sheer power of PyS60 - about 20% through the book, there's a ten line code example that's a fully working SMS Inbox search tool. In ten lines! The richness of the Python language and the PyS60 modules thus make writing a book teaching it all something of a challenge."