Nokia today officially unveiled their E51 smartphone. It should be available in the last quarter of 2007, with an estimated retail price of 350 euros sim-free. At just 61cc it's even smaller than the 6120 Classic, and is a new contender for the title of world's smallest smartphone. An impressive number of features have been packed in including a full range of cellular and data connectivity options: quad-band GSM with GPRS and EDGE, WCDMA with HSDPA (850 and 2100Mhz) and WiFi. There is also a 2.0 megapixel camera, FM Radio, 2.5mm audio jack and IrDA, USB and Bluetooth for local connectivity.

For more info, including photos, read on... 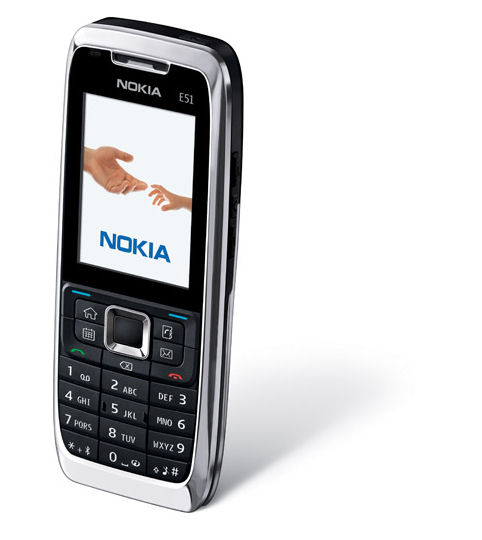 When AAS reviewed the 6120 Classic smartphone, many people remarked that they'd love to have a version of the 6120 which included Wi-fi. Well, the newly announced E51 seems to be pretty much just that, albeit a bit more expensive.

The E61 is part of the Eseries range and intended for businesses, but many Eseries models have proved popular with consumers too. Those who were thinking of getting a 6120 may want to take a look at the E51 as a viable alternative.

With the E51 Nokia has produced a technically very capable phone, but in its press release highlighted the hardware and software features that are available to simplify the ease of use. These include a customisable version of the home screen, the use of One Touch hardware keys (Contacts, Calendar and Messaging quick access), notification LED for messages, improved set up wizards for email and Internet connectivity.

"Business users increasingly need one device that they can count on to work productively and which offers them the level of efficiency that brings more freedom and balance to their personal lives," said Antti Vasara, senior vice president, Mobile Devices Unit, Enterprise Solutions, Nokia.  "With the new Nokia E51 device, we are responding to this need with a business smartphone that combines the latest advances in business mobility and a classic, stainless steel design, at a price that makes it perfect for company-wide deployments."

Nokia also continues to promote the enhanced voice features of the E51 for corporate users thank to its ability to integrate with corporate telephony systems (PBX) through software such as Nokia Intellisync Call Connect for Cisco and Nokia Intellisync Call Connect for Alcatel. Nokia lined up BT (British Telecom) for a quote for the press release. BT plan to use the E51 in corportae deployments of Fusion, its FMC solution.

"Nokia and BT share a vision that business mobility adoption will thrive when our collective customers and their respective end users, derive productivity improvements from mobile enabled applications," said Rakesh Mahajan, global director of mobility at BT Global Services. "For the BT Corporate Fusion solution, we chose the Nokia E51 for its classic Nokia business smartphone features and design, its ease of integration into our solution, and its affordability, making it more appealing for widespread use within companies of all sizes."

There is also the usual support for VoIP services for both corporate and consumer users with Gizmo being used as an example of how customers can cut call costs. Gizmo will be available via the Nokia Download! application on their mobile phone.

For corporate users the E51 has an attractive feature set and price combination. It also offers more features than most enterprise phones which have been primarily focused on email. Although mobile access to email has thus far been primarily responsible for the uptake of smartphones in the corporate environment there are other drivers which have not been exploited.

There are also many workers who do not regularly leave the office environment and therefore are not prime candidates for mobile email. However they will utilise voice communications and having a device that is tied to an individual rather than a desk location makes a lot of sense. The E51, through its support for corporate PBX's and WiFi connectivity, combines the benefits of fixed lines (low costs, easy call management) with mobility. It is an exemplar of the ideas behind FMC (fixed-mobile convergence) in the corporate environment and this may enable Nokia to reach new corporate customers and widen the userbase of corporate smartphone users.

The fact that the E51 can also be used for additional services (e.g. corporate applications or web access to back end solutions) gives it further value. The E51 can of course be used for mobile email, although, realistically, only in a read only formats due to the limited text input capability. Other Eseries devices provide a better solution for email on the go (E61, E90).

As Krisse noted the E51 also has potential in the consumer market. This is similar to the E65 which has been adopted by a number of UK operators and sold as a high end consumer handset. 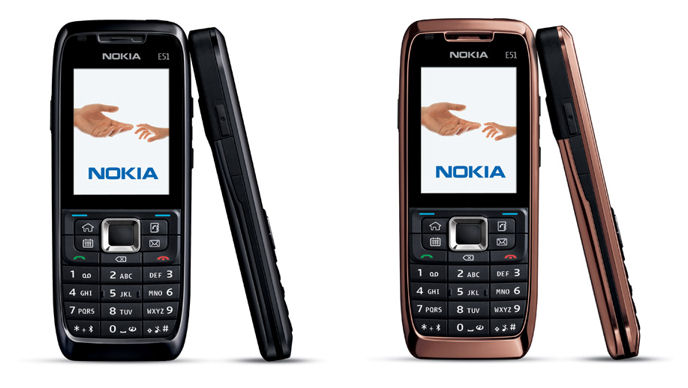