Nokia have announced the Nokia N95, featuring an innovative double slide design with multimedia controls and a keypad on opposite end of the phones. Read on for full details, pictures and the full press release.

In the hand the most impressive aspect of the device, given its feature set, is its size. At 99mm x 20mm x 53mm (90cc), the N93 packs an impressively amount into a small space. Nokia have managed to add two major technologies to the Nseries line (GPS and HSDPA) while significantly reducing the volume of the device. In length and width dimensions it is larger that the other Nseries slider - the N80, but it is considerably thinner.

HSPDA is the next generationin cellular connectivity. The N95 is a category 6 HSPDA device which means it is up to 10 times faster that WCDMA (3G). Clearly HSDPA support is required at a network level, but many networks have already begun their testing or roll out periods. The faster connection speeds make downloading media (such as podcasts via the in built Podcast application) more palatable and should also improve latency/round trip times. Wi-Fi, WCDMA (3G) connectivity, together with quad band GSM and EDGE are also supported. Bluetooth 2.0, IrDA and USB make up the local connectivity options.

The 5.0 megapixel camera uses Carl Zeiss Optics with autofocus and digital zoom with a dedicated 2 stage capture button on the side of the phone. Video capture at near DVD quality is also supported. On the side of the device there are several buttons dedicated to camera usage. This allows the device to be held in a similar way to a traditional camera with the screen, in landscape mode, used as the view finder and the shutter button on bottom right hand side of the device (top right when phone is held horizontally). On the rear of the device, next to the camera is the slide switch, which is used to open the lens aperture and activate camera mode. Although it is difficult to judge the image quality at this stage the evidence we saw suggest that the N95 will be on of the most capable camera phones available. 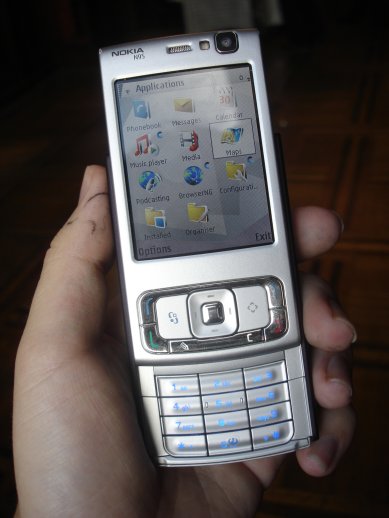 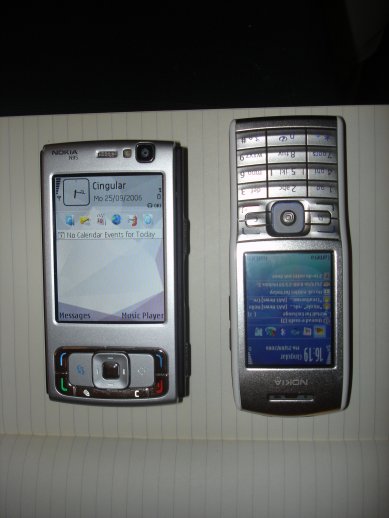 A GPS is integrated into the device with anticipated accuracy of around 10m (satellite signal permitting). The devices will ship with an application called Maps which has global overview maps built in. More detailed maps (with coverage over more than 100 different countries available) can be downloaded for free from an online server. The detail available varies from country to country, but in many cases it is available down to street level. A point of interest (POI) database is also included. All the maps are available for free, as is basic route planning, but navigation functionality (with voice and on screen prompts) will be available as a pay-for add on. City Guides will also be available for purchase and other services are likely to be made available in the future. The mapping software and services is likely to based on technology from gate5, a company which Nokia recently announced it was acquiring.

Music playback is also a major focus of the device. The dedicated multimedia keys on the top flip of the device are primarily designed for music playback (although can also be used in other multimedia contexts). Wireless stereo sound output (via the A2DP Bluetooth profile) is also supported, and stereo audio output is also supported by the TV output feature and the on board stereo speakers. The music formats supported include MP3, AAC, AAC+ and WMA. Video playback on the QVGA screen is excellent and supported video formats include 3GP, Real Video and MP4 with support for the latest AVC codec.

The multimedia key now leads to a revamped application and multimedia shorcut view which now supports both a greater number of shortcuts (applications, multimedia files and bookmarks) and more flexible personalisation. As a result it  is now a more generic shortcut key mechansim and offers an alternative to the standard application launcher.

The N95 uses S60 3rd Edition Feature Pack 1 (Symbian 9.2) and as such includes version 2.0 of the open source Nokia web browser (supporting WML, XHTML and HTML in one browser), Flash Lite 2.0, FOTA (firmware over the air updates) and more.

The N95 uses the same small power port as other S60 3rd Edition devices, but the in-box charger is considerably smaller than the existing models (up to 60% smaller). The N95 has a 950 mAh battery, it is likely that the N95 will require a daily charge with moderate to heavy use, although 3-6 days may be possible with lighter use (dependent on network strength, type and other factors). 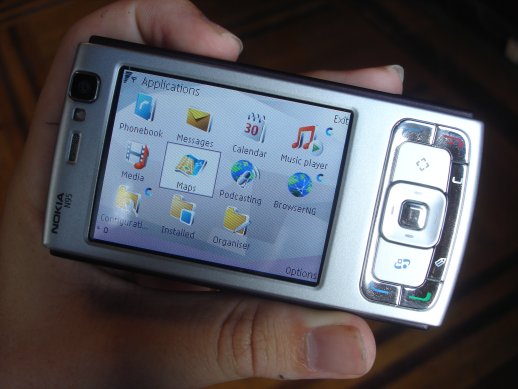 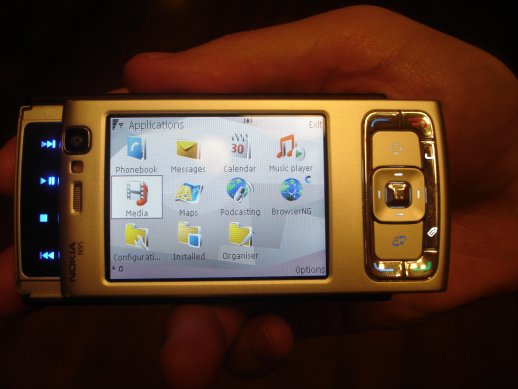 Nokia Open Studio 2006, New York, US - Nokia today introduced the Nokia N95, an all-in-one multimedia computer with a pioneering 2-way slide concept, integrated GPS functionality, a 5 megapixel camera and support for high-speed mobile networks, making it easier to watch and record videos, listen to songs, take high-quality photos, browse the internet, or catch up on email while on the move.
"The Nokia N95 brings a range of multimedia ingredients together, such as a fantastic display, outstanding photo and video capability and high-speed connectivity, making it the ultimate multimedia computer," said Anssi Vanjoki, Executive Vice President, Multimedia, Nokia. "This single device - which fits easily in your pocket - can replace stand-alone devices that you no longer need, whether it's your music player, your digital camera, PDA or navigation device. Most importantly, the Nokia N95 is with you and connected when you want to use it."
The innovative 2-way slide concept makes it easy to switch between different modes, going from reading maps to watching a video with a simple slide. A numeric keypad slides out from one end of the device while dedicated media keys slide out from the opposite direction, converting the display into full screen landscape mode. With powerful 3D graphics, the Nokia N95 has a stunning user interface that makes it intuitive to find the features and services you want.
With its integrated GPS at your fingertips, finding your way just got easier. The Maps application includes maps for more than 100 countries, enabling users to explore the world, find specific routes or locate services such as restaurants and hotels and covering more than 15 million points of interest. You can also purchase additional features, such as city guides and voice guided navigation.
With the Carl Zeiss optics on the 5 megapixel camera, you can capture print quality photos and DVD-like quality video clips. Photos and video clips can be enjoyed on a compatible television thanks to the device's TV out feature and support for Universal Plug and Play (UPnP) technology.
Designed for High Speed Downlink Packet Access (HSDPA) networks and with support for WLAN, EDGE and WCDMA networks, the Nokia N95 provides excellent coverage and speeds wherever you may be. In HSDPA networks, browsing the internet, reading email, streaming video and downloading large files can be carried out up to 10 times faster than with 3G.
The Nokia N95 also offers a first class entertainment experience with the combination of a large 2.6" QVGA 16 million color display, impressive 3D graphics, built-in stereo speakers offering a 3D stereo effect, standard 3.5 mm audio jack, support for compatible microSD cards and mini USB for convenient data transfer. Browsing the internet on the Nokia N95 is a pleasure using the Nokia Web Browser with Mini Map, with new features such as a floating toolbar, password manager and auto complete, as well as web feeds with support for Atom and auto update.
The Nokia N95 is based on the world's leading S60 software on Symbian OS, enabling you to personalize your device from a wide choice of compatible applications that can be downloaded to the Nokia N95, including games, navigation, entertainment, productivity and creativity. The Nokia N95 comes out of the box ready to create, connect, consume and interact with some of the internet's most popular services. Use Yahoo! Search to search for and find most anything on the web, scroll though a book with Amazon's MobiPocket Reader or snap a photo and send it directly to your Flickr site.
The Nokia N95 is expected to start shipping in volumes during the first quarter of 2007 at an estimated unsubsidized retail price of 550 euros.