When the Nokia 701 was announced, I leapt up on its specification with my editor's hat firmly in place. "BL-5K battery, 1300mAh" read the press release. Having owned the Nokia N86 and having played with the C7 and X7, all with the same battery, "that's got to be a typo" I asserted and insisted that Rafe fix it to "1200mAh" for our news story. As it turns out, the Nokia 701 ships with a new 'variant' of the BL-5K that we haven't seen before, rated at "1300mAh". Have there been chemical tweaks inside? 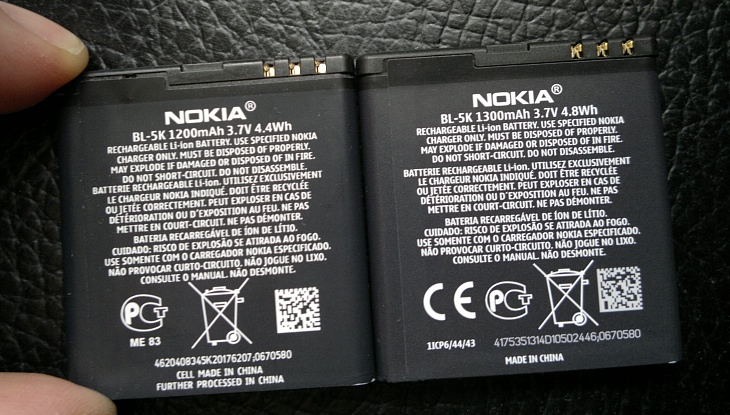 [Updated text, thanks to commenters!]

As I say, I've had numerous BL-5Ks through my hands and so this is all a big surprise. What makes all this even more fascinating is that Nokia's own product page for the BL-5K resolutely insists that the capacity is still 1200mAh. As do the BL-5K product pages for every other compatible phone.

However, it does seem as though there is a new battery design here, maybe a tweak to the chemicals or structure that enabled a little more capacity to be squeezed in without increasing the overall form factor. From comments, it seems that Nokia has been busy uprating many of their more popular batteries with new technology, typically adding about 10% to their capacity. See, for example, this link for the BL-5J).

Which means that ultra-geeks like me might now start to go looking for these higher capacity versions, to retrofit our N86s and C7s, and other devices.

Comments welcome if you've spotted other mainstream Nokia smartphone batteries that have been uprated!