The news of the latest Ovi Store downloads milestone comes from a tweet by Macro Argenti, Senior Vice President for Developer and Marketplace at Nokia.

The latest growth is, in part, driven by the decision to drop the log-in requirement for free content in Ovi Store's mobile web channels (mainly feature phones), but also reflects usability and performance improvements made to the Ovi Store client (all devices) and the increased proportion of Nokia devices shipping with Ovi Store pre-installed.

All About Symbian tracking numbers

All About Symbian's tracking estimates that there have been around 2.1 billion cumulative downloads from Ovi Store since it launched in June 2009. Of these, more than 1.7 billion have been in the last 12 months, and around 600 million in the last three months.

We estimate that Ovi Store will pass 3 billion cumulative downloads in late October or November (possibly just in time for Nokia World).

Nokia releases new data on the performance of its app store on a regular basis, through this dedicated page, news stories and press releases. Google, Android and other app stores publish data on a less frequent basis and usually only announce milestones (e.g. 3 billion app downloads). However, by extrapolating from the data that is released and using some estimates it is still possible to make a comparison, but these should only be considered approximate: 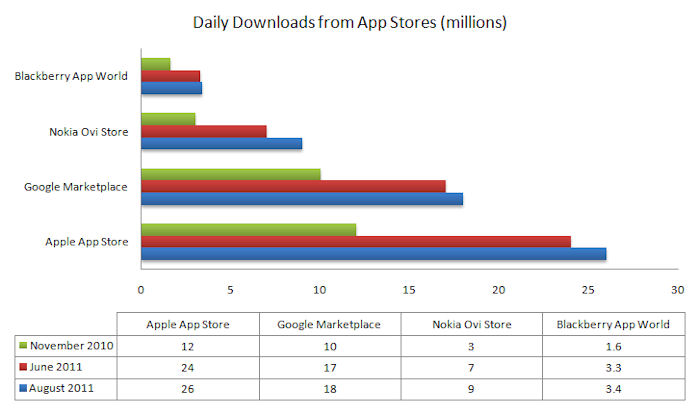 The numbers in this chart are based on Apple's press release for its 15 billion milestone, Google's reaching 4.5 billion downloads, and an extrapolation of numbers cited at the this years Blackberry World.

It should be noted that each app store contains multiple device and consumer segments, which behave in different ways. For example both the Apple and, to a lesser extent, Android numbers include a significant number of downloads to tablet devices. Similarly, Nokia's numbers include downloads to Series 40 phones.

Downloads from updated applications (upgrades) also have an impact, a single application may count for multiple downloads if it has received one ore more update (e.g. Angry Birds). Nokia recently enabled application updates in Ovi Store, but only for Symbian^3 devices (around 15-20% of downloads in Ovi Store comes from these devices).