Nokia's Ovi Store is continuing to grow at a rapid pace; it recently passed the 6 million downloads per day mark and now contains more than 48,000 content items, with approximately 1,000 news items being added each week. Symbian phones make up approximately 75% of the downloads (4.5 million), with Series 40 accounting for most of the remaining downloads (1.5 million). A total of 1.8 billion content items have been downloaded since June 2009.

The daily download rate has been growing steadily for the last two years, as illustrated in the charts below: 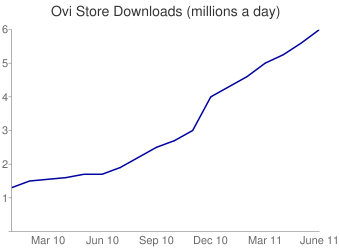 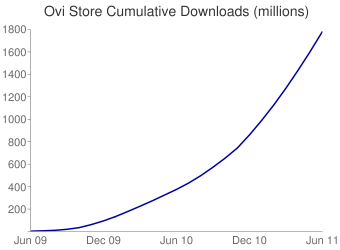 All About Symbian tracking numbers

All About Symbian's tracking estimates that there have been around 1.8 billion cumulative downloads from Ovi Store since it launched in June 2009. Of these more than 1.4 billion have been in the last 12 months, and around 500 million in the last three months.

Our Ovi Store catalog tracking indicates that of the 48,000 content items approximately 25,000 are Symbian application and games. This number specifically excludes customisation elements such as themes, wallpapers, ringtones and videos. There has been a notable increase in the number of Symbian applications and games being added since Qt 4.7 enabled content started being accepted by Ovi Store in April 2011.

Ovi Store is available in 190 countries and over 30 languages. More than 90% of customers are able to download content in their own language.

Nokia releases new data on the performance of its app store on a regular basis, through this dedicated page, news stories and press releases. Google, Android and other app stores publish data on a less frequent basis and usually only announce milestones (e.g. 3 billion app downloads). However, by extrapolating from the data that is released and using some estimates it is still possible to make a comparison, but these should only be considered approximate: 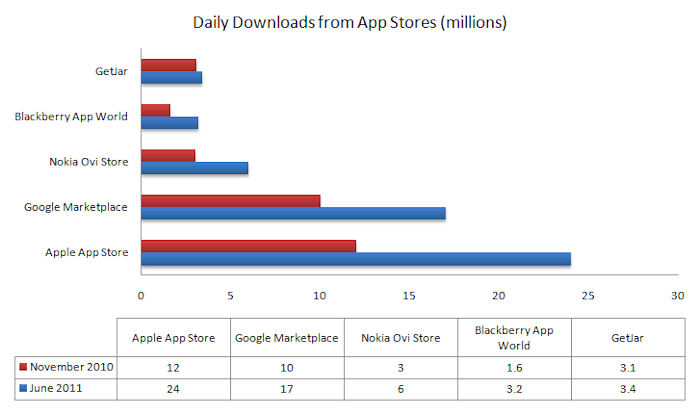 The numbers in this chart are based on Apple's release of numbers at WDC (14 billion downloads), Google's April earnings call (3 billion app installs), numbers cited at the recent Blackberry World and an estimate for GetJar based on earlier growth numbers.

It should be noted that each app store contains multiple device and consumer segments, which behave in different ways. For example both Apple and Android number include significant number of downloads to tablet devices. For example, the average tablet user downloads more content that the average smartphone user.

Downloads from updated applications (upgrades) also have an impact, a single application may count for multiple downloads if it has recevied one ore more update (e.g. Angry Birds). Nokia recently enabled application updates in Ovi Store, but only for Symbian^3 devices (around 15-20% of downloads in Ovi Store comes from these devices).