Angry Birds Seasons, which is available for all Symbian^3 devices, has been updated to help celebrate St Patrick's Day. There's a distinctly green tinged theme to proceedings, but you can also expect to see shamrocks, pots of gold and Irish style top hats. The update, which adds an additional 18 levels to the game, can be downloaded via the in-app update mechanism or via the Ovi Store.

In the game you help the Birds take revenge on the Pigs for stealing their eggs. Across the different levels, you use the destructive power of the Birds to knock down walls, castles and more to reach the thieves. Angry Birds is highly addictive and very popular, quite possibly because we are hard wired to love the parabola.

We have previously reviewed Angry Birds Seasons in its Christmas incarnation, but the same comments apply to the latest update, which includes all the previous updates (Halloween, Christmas, and Valentine's Day) as well as the new St Patrick's Day themed levels.

You can download the update through Ovi Store, but the easier method is to use the in-game update functions (touch the globe icon on the right hand side of the opening screen).

Rovio, the company behind Angry Birds, say that offering continuous updates to the game is part pf their business plan, aimed an ensuring an on-going relationship with their customers (you'll hear more about this in next week's podcast). As such, you can expect to see more updates to Angry Birds Seasons in due course; an Easter update is a distinct possibility. 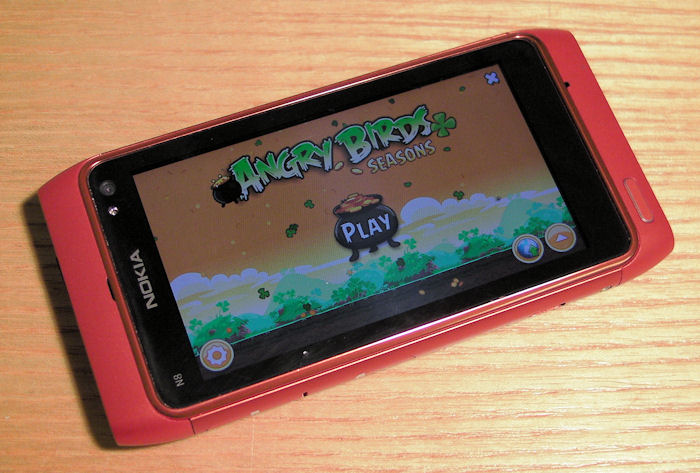