If there is one game that squawks “Mobile gaming is a big thing” then it’s Angry Birds. First available for iOS devices, it made its way to Symbian^3 before heading to Android devices, cuddly toys, sketches in Israeli topical comedy shows, and looks set to break into the home consoles during 2011. It’s no surprise that when Nokia wanted to make a visual statement at Nokia World that they 'got' gaming, they called The Birds onto the stage. Here's our look at the festive "bonus" edition of the title. 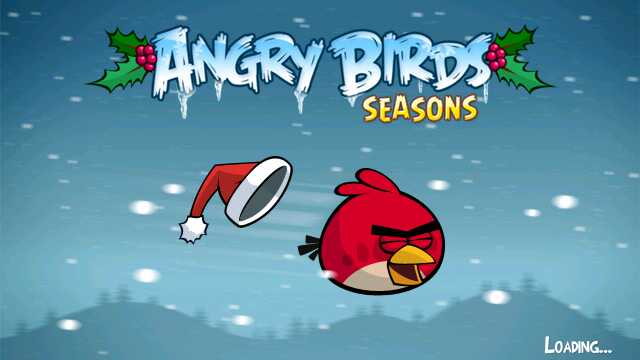 In case you’ve missed it, there’s a modicum of plot (told online at YouTube in true Chuck Jones style), and your birds need to kill all the pigs on a level. They do this by either crashing into them like a demented furry ('feathery'? - Ed) cannonball, or causing things to fall on them in the style of Wyle E Coyotoe. There’s a bundle of physics in there for all the animation and resulting movement, there’s tactics, as you have a limited number of birds per level, and each bird has a different special ability, be it blowing itself up, dropping an exploding egg, shattering like a shotgun, you get the idea.

If you’re new to the world of Angry Birds, you might be better heading for the regular version – it has more levels, and is geared towards new users with a gentle learning curve and very forgiving level design.

Angry Birds Seasons is for the pros. 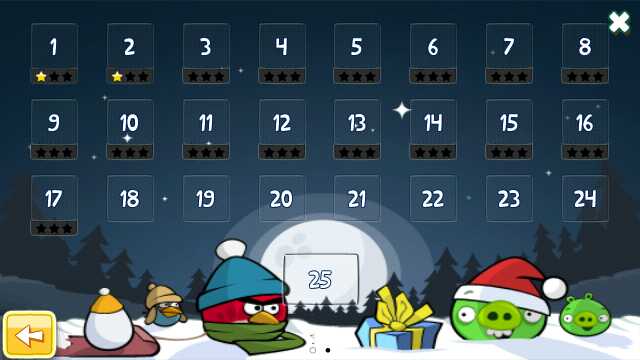 Essentially it’s an advent calendar and behind each door is a new level. In a cunning twist, Angry Birds will “call home” to check the date on the server and keep any levels destined for the future “locked up” (so no sneaky advancing your clock, although you could spoof the server address on a local WLAN, intercept the call, send back the confirmation - or you could just wait).

And these levels are hard! Just getting to all the pigs is going to take some time, practice and experimentation. If you want to get the elusive 3 star rating on completing each level for a high score, you’ll need every ounce of skill you can muster to crack open the defensive walls, blocks and rocks – let alone trying to capture the bonus Christmas presents that litter the landscape.

Controls are as before, you can use pinch to zoom, and drag the screen around to examine the level. When you are ready to fire the bird from the catapult, just drag back the bird, move it around to get the angle of launch, and… release!

It’s really easy to control, the goal is obvious, yet there are a million permutations. That’s why Angry Birds is a great mobile game, and when you add in a supremely slick presentation from Rovio, you see why it is such a big thing. My only concern with the full version is that because there are so many levels, it can be easy to stuff yourself full of levels and get a bit sick of this rich gameplay. 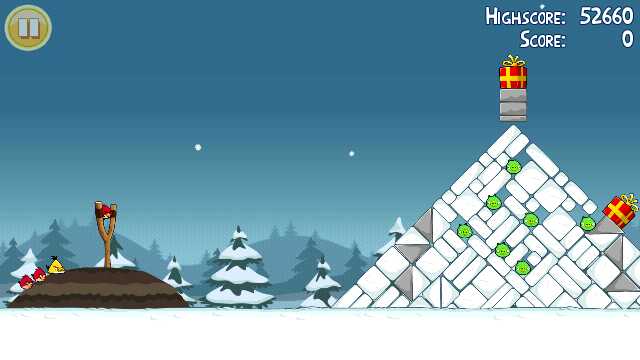 That’s not the case with Angry Bird Seasons and the limit placed on this special edition; that you can only open one level a day (assuming you started on Dec 1st - if you grab it later, any level from a previous day is available) takes a potential weakness of a game and turns it into a strength. Like a chemist giving out a tiny dose of Methodone on a daily basis, Angry Birds Seasons delivers up an addictive level, and then makes you wait!

So you have 25 levels for your Noel fun, but just to bring the value up a little bit more, the previous Halloween levels are also bundled in here. These don’t have a time lock on them and offer 45 levels (and a bonus) to the player, naturally with suitably spooky graphics. They also have a slightly easier difficulty level, so if this is your first experience, start with these. 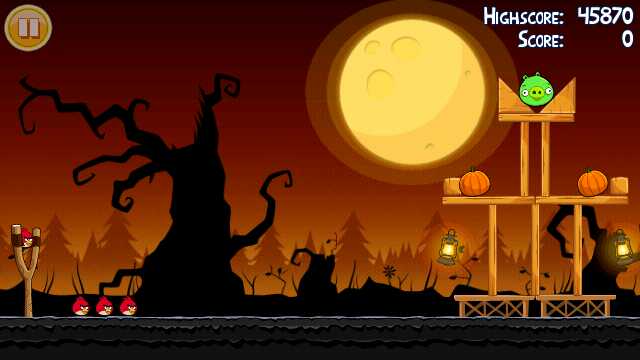 This is obviously an expansion of Angry Birds with little change to the underlying code, and while seventy levels might seem a small amount compared to the main game, it is half the price, and is clearly geared towards those who have already loved the game, fought through the original, and are looking for more. It is a standalone title, you don’t need the original to play. While the first Angry Birds on Symbian is a clear “AAS mega-game” the difficulty of this version does nudge it down very, very slightly to a score of 89 – strongly, strongly recommended, but only to fans of the genre.

Of which there are a lot, and they are all thankful for this little Christmas treat.