Swype, an alternative text entry system, is now available, via Ovi Store, for Nokia's Symbian^3 devices (Nokia N8 and Nokia C7). It replaces the current landscape QWERTY keyboard. Words are entered by tracing one continuous finger path, spelling out the word, across an on-screen QWERTY keyboard. The system also includes feature such as auto-capitalisation and spacing, intelligent editing, custom dictionary and much more. Swype provides, potentially, a faster text entry method, albeit with a small initial learning curve.

Update: I have been informed that Swype is not officially available for, or supported on the N8. I therefore recommend that you do not install it on the N8.

Swype and Nokia are working on adding N8 support to Swype. An update, with N8 support, is expected to be available shortly.

If you have installed Swype on the N8 you can remove it by following the instructions at the bottom of this story. 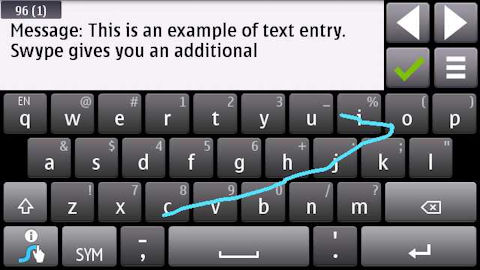 The basics of Swype are simple, but it is possible to significantly increase speed by making use of various shortcuts and methods; you can about many of these by reading the built in help (Settings-> Help). For example tracing from the Swype key to the SYM key brings up a set of controls that help with the editing process and navigation, as shown below. 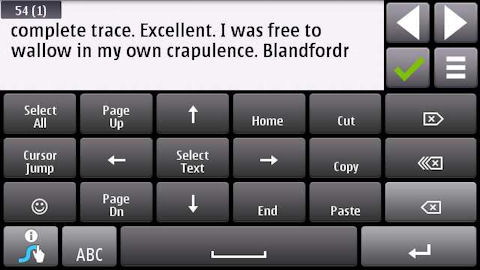 Another useful tap is to make use of the custom dictionary. To add a custom word to Swype (so it becomes Swypable) you tap it out, one letter at a time, using the Swype keyboard, then press the Swype key. Swype shares its custom dictionary with the standard keyboard. This means any custom words you have already added while using the phone will be immediately Swypable and need not be added again. 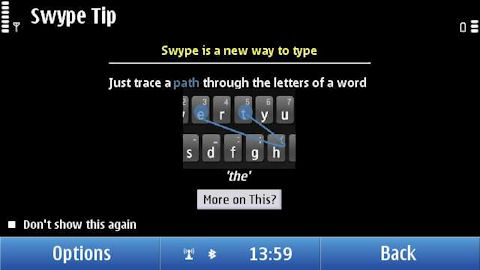 The installation of Swype will extend the options available in the text input settings. The Input Method settings allow you to switch from the Swype keyboard to the standard keyboard. After switching from one keyboard type to another you will need to reboot (switch off / switch on) your phone for the change to be implemented. 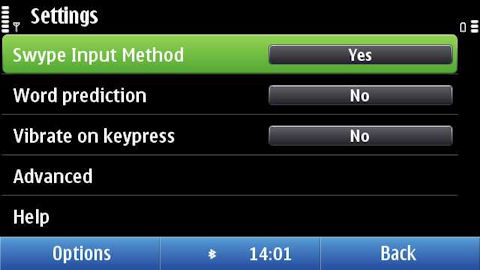 Swype also has its own set of settings, which allow you to control its precise behaviour. A key setting is one that allows you to trade off speed (of interpretation) for accuracy. For example if you are sloppy at entering words (e.g. frequently missing the correct key) this setting can improve overall accuracy although words may not appear so quickly in the text entry window. 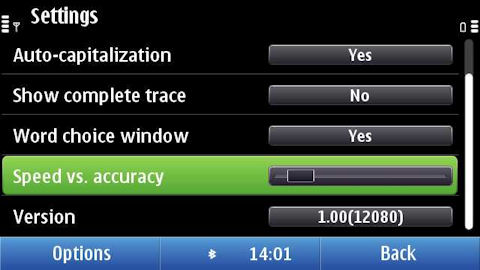 We wrote about the technology and company behind Swype when the beta for Symbian^1 devices was released:

Swype is a Seattle-based company, which was founded in 2003 by Cliff Kushler and Randy Marsden. Initially the company focused on perfecting the technology, but subsequently started targetting OEMs with a view to agreeing integration deals (a business to business approach, rather than the business to consumer approach). Swype has since appeared on a number of devices and on multiple platforms, recent notable additions include shipping pre-installed on the Samsung Galaxy S and Motorola Droid 2 Android handsets.

To facilitate further growth, last year it raised $4.5 million of Series B VC funding from Nokia Growth Partners, Benaroya Capital and Samsung Ventures America. It raised a further $1 million Series B funding from DoCoMo in February of this year.

Swype is available in the Ovi Store.

However, do note that Swype is not available in all markets and has limited language support (English UK, English US, French, Spanish and Portuguese).

Update: As noted above Swype is not compatible with the N8 (you are unable to change the settings). In order to remove Swype from the N8 you should follow the instructions below, which are also available from the Swype website.

1. Reboot the phone
2. Immediately go into Settings -> Application Manager -> Installed Apps
3. Choose to uninstall Swype
4. IGNORE the message stating you have to set Swype Input to NO in Swype Settings
5. Wait for the un-installation to complete.
6. Reboot the phone.
7. Swype will be un-installed and the default keyboard will be available.