Swype, an alternative text entry system, is now available, via Nokia Beta Labs, for most Nokia S60 5th Edition devices. Swype works by tracing one continuous finger (or stylus) movement, across an on-screen QWERTY keyboard, when entering a word. It provides, potentially, a much faster and more accurate way of entering text on touchscreen devices, albeit with a small initial learning curve.

Swype is relatively simple to use, but also offers a lot of power-user functionality for more advanced users (e.g. custom dictionary, multi-language support). Key features include double tap editing (to correct mistakes), auto-correction (spelling spacing and capitalisation), a 65,000-word 'learning' dictionary (easily add your own words, email addresses, etc. so they become 'Swypable'), and automatic help (detects if you are having problems and offers assistance). 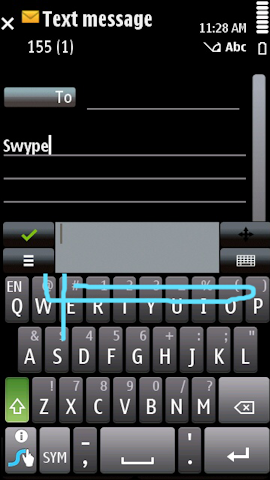 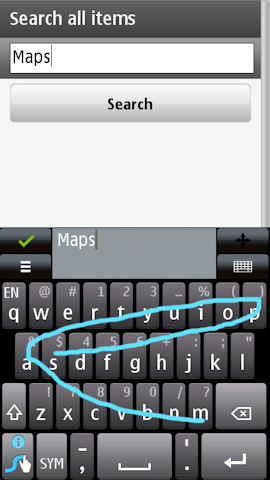 On Symbian^1 (S60 5th Edition) device Swype has been integrated into the existing input system (front end processor). In portrait mode it is available as the mini-QWERTY option; this means the existing alphanumeric keypad (T9) is also retained and you can easily switch between the two. In landscape mode the Swype keyboard replaces the QWERTY (full screen) keyboard, although the Swype keyboard can also be used in traditional hunt-and-peck manner of traditional on-screen QWERTY keyboards.

Swype will not suit everyone, but for many it will go a long way to solve the problem of entering text on a small touchscreen device. We'll take a more detailed look at the Swype system and its Symbian implementation once we have had a few weeks usage, from which to draw an assessment. 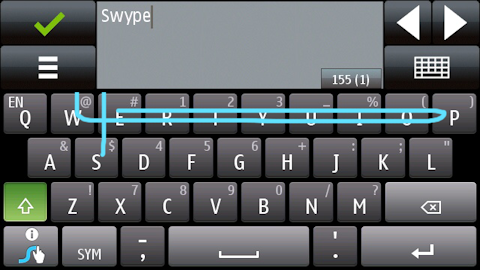 Swype say that it is possible, for most people, to achieve speeds of up to 40 words per minute with the system, but this will clearly depend on the individual and their level of familiarity with the system.

Swype is currently available for the Nokia 5800, Nokia 5230, Nokia X6,  Nokia N97 and Nokia N97 mini. Swype Beta for Symbian includes support for English US, Spanish, Canadian French and Brazilian Portuguese. However, Nokia and Swype are also planning to broaden support for both devices and languages over the coming months.

Nokia Beta Labs describe the release as a limited beta:

Swype and Nokia have been hard at work to deliver a limited beta release to Nokia S60 5th edition device owners. Your feedback will be valuable to us in the coming weeks, and we are especially interested in how well Swype interfaces with the many types of applications you use every day.

As usual, with beta software, you should only install the software if you're prepared to accepts the odd glitch. During our testing, on an X6, we found there were a few visual glitches, especially in landscape mode, but in general the software was reasonably stable.

Swype is a Seattle-based company, which was founded in 2003 by Cliff Kushler and Randy Marsden. Initially the company focused on perfecting the technology, but subsequently started targetting OEMs with a view to agreeing integration deals (a business to business approach, rather than the business to consumer approach). Swype has since appeared on a number of devices and on multiple platforms, recent notable additions include shipping pre-installed on the Samsung Galaxy S and Motorola Droid 2 Android handsets.

To facilitate further growth, last year it raised $4.5 million of Series B VC funding from Nokia Growth Partners, Benaroya Capital and Samsung Ventures America. It raised a further $1 million Series B funding from DoCoMo in February of this year.

The participation of Nokia Growth Partners in the funding round was a good indication of Nokia's interest in the company. It remains to be seen whether Nokia will pre-install Swype into any handsets, but for now it is available via Nokia Beta Labs.

Swype demo and interview - from MWC 2010, with CEO Mike McSherry