The changing shape of Nseries - no scaremongering, just the facts

Nokia's quoted comments regarding the future of its Nseries devices have been causing much comment in the media in last few days. This editorial puts some perspective into the story - Nseries devices only represent around 12% of Nokia's Symbian portfolio and the evolution of the brand towards Maemo/MeeGo had been signposted since Autumn 2009. Moreover it is vital to understand that MeeGo and Symbian are complimentary parts of Nokia's overall software strategy. Read on for further analysis of the evolution of Nseries and a number of salient facts.

Here's the relevant statement, in full, from Nokia:

Symbian is enabling us to bring smartphones to more and more people and ensures scale for our solutions and services, and for developers. The Nokia N8 is our most advanced smartphone based on the new Symbian^3 software. MeeGo running on high performance devices, will deliver a wealth of Internet, computing and communication experiences with deep Ovi service integration. Going forward, Nseries devices will be based on MeeGo.

Nokia's strategy for MeeGo and Symbian

Nokia's overriding aim with MeeGo is to create a class of devices beyond what we think of as smartphones today. This class of devices can be described as as sitting between smartphones and laptops. That is what Nseries will be about, going forward. In one sense, this means Nokia has effectively tightened its definition of what it considers mobile computing (Nseries) to be.

MeeGo running on high performance devices, will deliver a wealth of Internet, computing and communication experiences. During 2010, MeeGo will become our pinnacle platform for Nokia’s solutions and services. We plan to create our flagship experience on MeeGo, with deep Ovi service integration; offering the most advanced performance and user experience. Nokia plans to launch a MeeGo-based device in 2010. MeeGo will offer an unparalleled open computing platform for pocketable mobile computers, netbooks, tablets, IP mediaphones, in-vehicle infotainment systems and connected TV’s.

Symbian is enabling us to bring smartphones to more and more people and ensures scale for our solutions and services, and for developers. It is already the market leading smartphone platform and enables Nokia to offer a wide and differentiated portfolio of devices. Symbian balances performance with cost advantage to enable Nokia to democratize smartphones to a global mass market.

The relation between the two software platforms, in device terms, was best outlined in this slide from Nokia's Capital Markets Day late last year, where Nokia first outlined in detail in software and corporate strategy for the next few years. 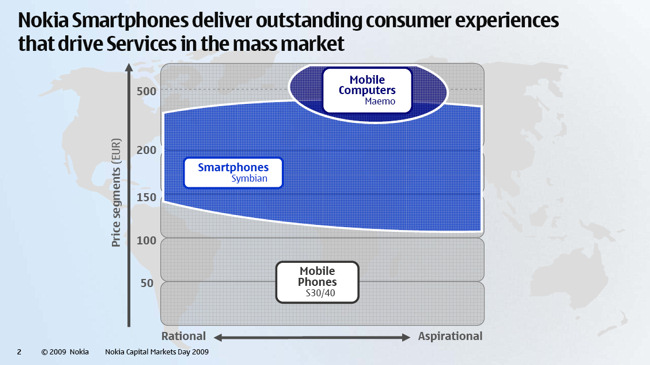 However, it is also important to understand that MeeGo and Symbian are linked by common development environments - Qt and WRT. This means a large proportion of applications and services will be common to both platforms. This is a significant difference to existing mobile platforms, where there is something of an 'island effect' between platforms, with the exception of JME and select lower level software components (e.g. WebKit).

Symbian and MeeGo are complimentary to one another. Nokia's experience with Symbian has demonstrated that it is difficult to have a single platform that encompasses a full market range of devices. There is an inevitable conflict between the requirement s of devices opposite ends of the price spectrum. The primary aim of Symbian development in recent years, including Symbian^3, has been reducing the bill of materials to produce a phone. This has enable Nokia to dominate the mid tier and low end smartphone market where it has around a 70% market share. By contrast, MeeGo is not constrained by the need to run low cost devices. This means it can be more flexible, adopt technology innovations faster and have a differentiated user experience. Consequently it is better equipped to meet high end Android, iOS and Windows Phone 7 devices head on.

Both platforms are fully open source, with the guiding reins held by the Symbian Foundation and Linux Foundation respectively. Both have road maps stretching at least 12 months into the future. This degree of openness is unprecedented in any major mobile device platform, but comes from Nokia's belief than the business decision to use open source based platforms (and related activities) will enable them to build a richer, more innovative ecosystem at a faster rate than their competitors.

The changing face of Nseries

In one sense, Nokia's own definition of Nseries being about multimedia computers and mobile computing has never really changed. However, both the market, technology and user expectations have evolved over the last few years. One of the consequences of this is Nokia's relatively poor performance at the high end of the market. It also helps explain the thinking behind Nokia's future software strategy [PDF] and its aims for both Symbian and MeeGo, as explained previously.

A combination of poor performance in the high end, caused by under investment in Symbian's UI, and the narrowing scope of Nseries, is most clearly illustrated by the changing number of Symbian-powered Nseries announcements over the last few years:

From 2008 onwards, more Symbian-powered devices were announced as numbered products (e.g. Nokia 5800). These numbered products now fall under Xseries and Cseries grouping. Looking back at the Nseries devices announced between 2006 and 2009, the majority of those in the N7x and N8x range would now fit into the X or C ranges. This reflects Nokia's changing attitude towards Nseries and mobile computing.

In the future we might expect to see a couple of Nseries devices a year (MeeGo powered mobile computers) and multiple Symbian-powered smartphones in each of the Eseries, Cseries and Xseries ranges.

Nokia will continue to produce powerful Symbian devices, similar to the N8, in multiple form factors and at various price points. However, they will appear within the X, C and Eseries classifications. At the same time, Nokia will continue, as it has in the past few years, to push Symbian down into lower and lower price points using a mixture of S60 3rd Edition FP2, Symbian^1 (S60 5th Edition), Symbian^3 and Symbian^4 devices. The higher end devices will be the first to run on the newer versions of the platform, but this will trickle down over time. Incidentally, this does mean that both Symbian^1 and Symbian^3 may be around longer than people are expecting. 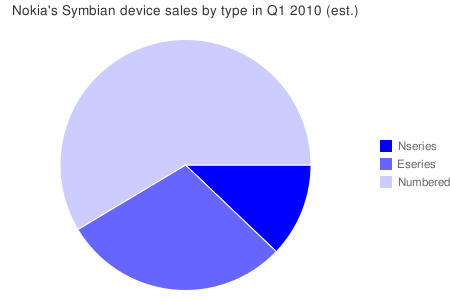 Indeed, we estimate that Nokia will ship more than 100 million Symbian devices in 2011. This is why articles and analyst opinions talking about the 'death' of Symbian are, at best, short-sighted. MeeGo sales will begin this year, but will ramp up in 2011, with sales in the 5-10 million range (very much an estimate).

Rafe Blandford, All About Symbian and All About Maemo, 24 June 2010

Filed: Home > News > The changing shape of Nseries - no scaremongering, just the facts