When is a phone not a phone any longer?

Steve Litchfield looks at the creeping size increases in modern 'phones' - at what point do they cease to become phones and turn into media 'tablets'?

There have always been large mobile devices, of course. The original Psion Series 5 palmtop, by modern standards, was a huge beast. As were the first few all most generations of Pocket PC. But these were unashamed two handed devices. Either held in two hands and operated with thumbs or by holding in one hand and using a stylus.

Then we had the rise and rise of S60, from about 2004 to about 2008, its classic heyday, with a determinedly one-handed interface, enabling (for the first time) 'smart' operating systems to be used 'on the go', in traditional mobile phone form factors. 2008 and 2009, of course, saw the Apple iPhone and a new way of interacting with a mobile device - your finger. In truth, fingernails and fingers had been used for years, but this was the first time an interface had been optimised for fingertip use. The concept, however, largely revolved around a two-handed model, i.e. hold the iPhone in one hand and tap (or swipe) away with the other.

And with S60 5th Edition also bringing in a finger-friendly approach, on top of a touchscreen, and with Android, Web OS, Blackberry OS and yes, Windows Mobile all now aping this model, we've suddenly got a world where screen real estate is everything - and, worryingly, screen sizes are going through the roof. Or maybe that should be 'through your pocket'?

To give you an idea of the progression involved in this area, take a look at this diagram - which may or may not be accurate, depending on the resolution of the monitor or screen you're reading this article on(!) See below the diagram for the devices using each screen size. 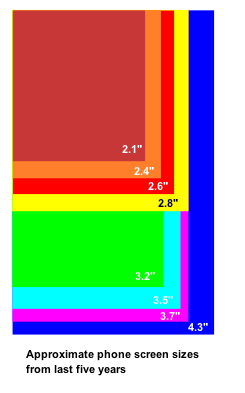 3.5" - the touchscreened Nokia N97 and N900 and Apple iPhone (note that the latter has a slightly different aspect ratio, but the comparison is close)

3.7" - the touchscreened Motorola/Verizon Droid, the Samsung duo of i8910 HD and Omnia II

NB. Yes, the Nokia E90 is omitted from this lineup, as it's something of an oddity in the smartphone family tree. By way of comparison, the button-driven E90 has a 4" extreme wide aspect ratio screen

Comparing the smaller screened phones (say, an N95) with the N97 and then the huge HD2 does rather beg the question that titles this feature: "When is a phone not a phone?"

It's a question that is best analysed by considering what is a phone? The debate started because a number of people were pressing me to admit that the new Nokia N900 was a far better 'smartphone' than the N97. And yes, some of its specs and capabilities are superior, but the problem is that, despite including a GSM/3G antenna, earpiece and microphone, the N900 isn't (by my reckoning) a phone, and so by definition can't really be a smartphone. You see, the fundamental division between 'phone' and 'mobile computer' comes as a result of looking at how the device is used. I suggest that if a device is used one-handed for more than 50% of the time then it can count as a 'phone'. In other words, a device that can be used while hanging from a tube train strap, while walking along with a bag of shopping, while driving, and so on. The whole point about a smartphone is that it takes this basic definition and adds a super-powerful OS and add-on applications - often with a miniature qwerty keyboard as well. All while keeping the primarily one-handed use and yet allowing the possibility of two-handed use when needed - such as when composing an email or watching a video.

If a device is used two-handed for most of its life then it's not really a phone at all - I'd class it as a 'mobile computer' or 'Mobile Internet Device' (MID). For example, the Nokia N900 is used 98% of the time in landscape, two-handed mode, and only rotated to portrait and one-handed use to make a voice call. Consider also the HTC HD2 - at 4.3", its screen is so huge that you can't hold it in one hand and comfortably operate more than a fraction of its functions. So you end up operating it two-handed and, despite the portrait form factor, it ceases to become a phone per se.

The same argument applies to the new (USA only at the moment) Motorola Droid, and the Samsung Omnia HD/i8910 HD, both with 3.7" screens, and I'd content that the 3.5"-screened N97 and iPhone are both on shaky ground - you have to have a large and flexible thumb for all screen functions to be practical using just one-hand. Should the N97 and iPhone therefore not be classed as 'phones'? They sit in a grey area, straddling the phone-computer border, in my opinion. Interestingly, the new Nokia 5530, at 2.9" and the Nokia 5800 (etc) at 3.2" work much better and it's easier for a roving thumb to hit any part of the touchscreen in normal operation - we're definitely in 'phone' territory here and, I contend, in a touchscreen 'sweet spot', where you get the benefit of a larger screen than is possible in a traditional button-driven phone and yet with the same potentially one-handed usage model. Will these realisations have any effect on manufacturers who seem intent on putting in ever-bigger screens into what they're marketing as 'phones'? Will the public (i.e. mass market) want to adapt to two-handed use in the long term? And what will be the shape of phones and smartphones as we move into the second decade of the 21st century? Comments welcome.

Steve Litchfield, All About Symbian, 2 November 2009

Filed: Home > Features > When is a phone not a phone any longer?