The risk of opening Symbian

Symbian is now open source, which will no doubt attract new developers with new ideas. Any manufacturer can freely use and change Symbian in their devices. It's an exciting future, or is it? David Gilson discusses the potential downside of Symbian being open source.

Before I begin, I will state two things for the record. First, I was a Psion user back in the day, and so I want to see Symbian do well. Second, I'm an ardent supporter of open source software, and have been exclusively using Linux as my desktop operating system since March 2009.

I took a step back to think when I saw the news about Symbian completing its transition to open source. Being released under the Eclipse Public Licence (EPL), anyone can take the source code, do anything they like with it, and not contribute any code back to the Symbian Foundation. On first impressions, this is a positive move for Symbian. Whenever developers find an OS bug, they can get in there and fix it themselves, if they are so inclined. Maybe contributing such fixes back, as long as the Symbian Foundation is seen to be efficient at committing patches. Also, new blood will be brought into the developer community, so that future incarnations of Symbian should be much more contemporary and enjoyable to use. A more disingenuous interpretation would be to say that this is Nokia and Symbian tacitly admitting that they have lost their edge with design and need the public to come in and blow away the cobwebs. Nevertheless, we all hope the end result will be the same - a more invigorated and fast moving ecosystem.

Furthermore, by having such a pervasive licence, the factor of market share is surely going to come into play. More manufacturers could now be encouraged to dip a toe into the Symbian world, which means more Symbian handset sales will be totted up when the analysts write their quarterly reports. Of course, this is just the potential, we have yet to see how it will play out. However, as more manufacturers choose to use Symbian, the better the chances are that they will in turn be paying employees to work on developing the platform, so everybody benefits ... don't they?

This is where my concern creeps in. Everyone is now free to use and adapt Symbian however they want, which means we could have a broad spectrum of Symbian variants on the market. This is generally referred to as platform fragmentation. This isn't a symptom of the EPL licence, as the same would apply even if Symbian had chosen one of the more widely known GPL licences (and probably more so given the license terms). The fragmentation issue is not new, nor is it limited to the open source world. For example, the closed source Symbian world has S60 3rd edition and S60 5th edition. Trying to tell a non-techie user that they can't run such and such an application because their phone is a 3rd edition handset rather than a 5th edition handset is probably going to meet with confusion at best, and at worst frustration and disenchantment.

Moving into the open(ish) source world and we see the same problem with Android. There are in fact (according to Engadget) three versions of Android, not to mention custom front-ends, such as HTC's "Sense" and Motorola's "Blur". To some potential buyers, this might not be an issue, they'll take anything as long as it has a touch-screen and whizzy interface. Although to others, it could cause confusion and make them hesitant to spend their money, with the perennial question, which should I choose? Moreover some of these front ends are causing problems for third party application compatibility.

Moving beyond the mobile world, I believe this fragmentation and wide degree of choice is half the problem of why the Linux desktop hasn't taken off. We can cast aside the arguments of Linux is too technical for ordinary people to use. Modern day Linux is just as easy to use as Windows, and the fact that it is behind Android and Maemo shows that it can be very user friendly. No, the real hands-on technical difficulties with Linux come from hardware compatibility issues, which is the other 50% of Linux's problems. I digress however, the 50% that is relevant to this discussion is that of mind-share. If you want to get Linux you don't just make the decision and say I'll go to Linux's website and download Linux. No, you have to choose which distribution you want: Debian, Fedora, Ubuntu, Open Suse, etc. Then, you even need to choose which desktop environment we want to use, e.g. GNOME, KDE, XFCE, etc. It is all of this choice, that I'd rather have than not have, which effectively dilutes mind-share, and makes uninitiated users not understand what is what.

In contrast, consider the iPhone. As objectionable as I find their closed and restrictive environment, at least you know what you're getting when you buy one. Quite simply, there is only one iPhone OS. Although it is worth noting that the current state of affairs with iPhone OS may not continue forever. 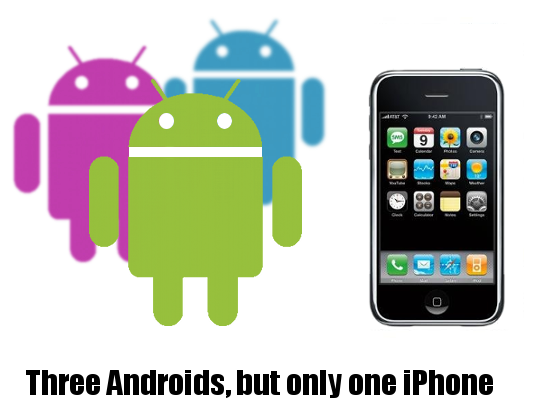 Which brings me back to the opening of Symbian. The open sourcing of the platform will encourage more companies to use it. I sincerely hope that we don't see various manufacturers fragmenting the platform, and thus creating a veritable zoo of Symbian variants. Surely, it is better for everyone if contributors and manufacturers alike stick to contributing to a common set of code, and handsets are proudly announced as being a Symbian phone. The alternative is that Symbian only gets contributions from Nokia and a loyal community of developers, while other manufacturers go off spending money on their own closed version of Symbian. Which would again leave consumers confused as to whether they should go for a pure Symbian phone, or to try finding out who makes the best variant of Symbian!

In closing, I hope that any manufacturers reading this will take it as a plea for common sense. Let's have the best of both open and closed worlds, a single strong Symbian that we all contribute to and benefit from.

David Gilson for All About Symbian, 12th February 2010.
You can find me on my blog, and as @davidgilson on Twitter.

I've updated this editorial to use 'fragmentation' rather than 'fork' in the meat of the discussion. As others have noted in the comment thread, the EPL license does have weak copyleft clause, which should discourage forks. However the same license encourages manufacturers to differentiate on top of Symbian. Symbian are planning a device certification program, which will require binary compatibility with the public APIs. The entire set up of the Symbian Foundation is predicated on encouraging openness and co-operation between those using and contributing to the platform. How well this will work in practise remains to be seen and, as such, fragmentation remains a very much a valid concern.

Clearly there is a balance to be drawn between differentiation on top of the platform and maintaining platform compatibility across devices. A good example are the current Symbian^1 devices from Nokia (N97 mini) and Sony Ericsson Satio, which have different homescreens and media players, but are compatible with each other as far as third party applications are concerned.

Read the comment thread for more, there are some great insights.