The rise and rise of the smartphone camcorder

Steve Litchfield explores the potential of the latest crop of video-recording smartphones, explains how these will enhance your personal life and looks to the future...

You'll remember from my look at multimedia smartphones a few months ago, that the Nokia N70 and N90 were considered a class above the rest in terms of still image and video capture. Whereas most other smartphones capture at the MMS standard of 176 by 144 pixels, the N70 and N90 capture video at 352 by 288, i.e. four times the number of pixels per frame. 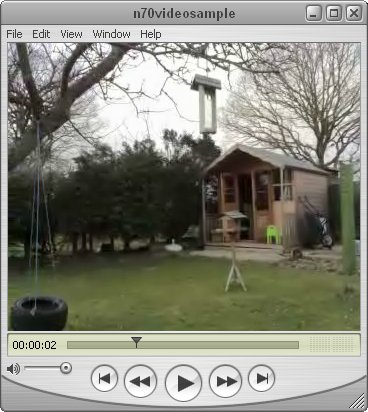 In practice, this means that, given good enough light and provided you refrain from jerking the frame around too much, video footage from your smartphone can be spliced into your home movies. The picture quality isn't really as good as that from even the cheapest 8mm camcorder, but it's not so drastically worse that you'll cringe when watching it back. Compare this to MMS-quality clips, which typically look utterly awful when blown up and watched on a TV or PC monitor.

To illustrate the quality you can expect from the N70 and N90 (and presumably subsequent N series smartphones), here's a test clip I filmed just now in the garden. It was a bit overcast, so the light wasn't brilliant, but you'll get the idea. Download it as v70videosample.mp4, 620K.

(By the way, if your PC or Mac can't play .MP4 video clips, get with the programme - Google for the right codecs now, or, easier, just install a recent version of Apple's Quicktime player)

And things can only continue in the same direction. I predict that by this time next year, Nokia will offer an N series smartphone with full DVD resolution, perhaps even at the full 25 (or 29, if you're in the USA) frames per second.

Now there's more to video capture coming on board than simple convergence, though that's impressive enough. You may remember my photo-focussed article 'Immediate Action'? The same philosophy applies with video, i.e. that because your smartphone is always with you and ready for action at a moment's notice, you'll capture a lot more footage and it'll be a lot more interesting.

Your daughter larking around with the cat? Your mum meeting an old friend? Your wife presented with a birthday cake? Stuck in the middle of a real news story (heaven forbid)? In each case, you'll think 'Darn it, wish I had my camcorder with me', closely followed by 'Oh, I can use my smartphone instead'.

Never mind my boring garden clip, you can take video footage (with your N70, N90 or future smartphone) when there's something worth filming rather than the traditional 'oh, let's get the camcorder out and see what there is to film'.

And when your 2007 smartphone has an hour's capacity for DVD-ready video on each £30 2GB expansion card, that'll be one more consumer gadget consigned to gather dust on the shelf.

Filed: Home > Features > The rise and rise of the smartphone camcorder