While at the recent London launch event Rafe took a hands on look at the new Sony Ericsson P1i smartphone.

In its design, the P1i is a departure from the traditional P series form factor, being the first not to have a numeric flip keypad (and consequently also has no flip closed mode). Instead, the P1i takes its design cues from the Sony Ericsson M600i. Indeed the P1i can be best described as the M600 design and form factor combined with the feature set of the P990, along with some extra updates thrown in for good measure. 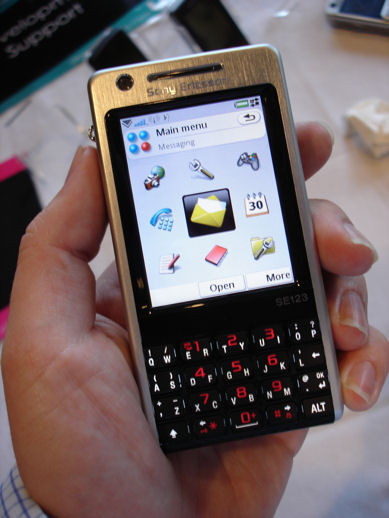 Beneath the 2.6 inch QVGA screen is a QWERTY keyboard with a twist. Rather than a key per letter as is the norm with thumb keyboards, the P1i has the same innovative design as the M600. Each key serves two letters, with the letter entered dictated by the side of the key you press; effectively two keys are merged into one. This allows the overall size of the keyboard to be slimmed down, while maintaining good sized keys and thus giving a more pocketable, narrower phone.

At first glance it might seem that this keyboard cannot compare with a full size thumb keyboard, but this is not really the case. Based on my M600i experience, I think that, with a few days usage, the average user will not notice much of a difference in terms of speed of input between an E61, a Treo or a M600/P1i. The keyboard on the P1i is slightly better than that on the M600. It gives better haptic feedback when the keys are pressed and this should translate into an extra few words per minute in typing speed terms. It is very similar to the improvements between the E61 and E61i. 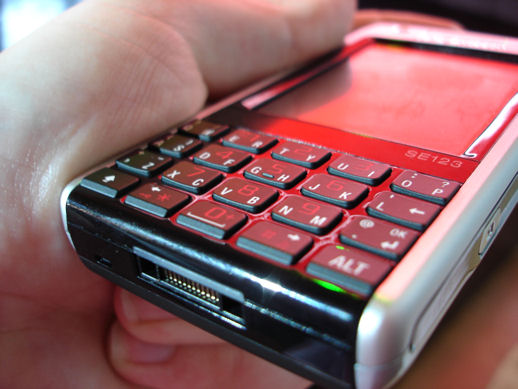 The production keyboard is likely to have more bevelled keys, similar to the M600.

The familiar UIQ/Sony Ericsson hand writing recognition input option is present for those who do not want to use the keyboard. Both keyboard and pen input support the excellent predictive input software (provided by Zi Corporation) which can speed up input by about 20%.

The main consequence of the smaller form factor is a significant reduction in the overall size of the P1i; compared to its predecessors it is 25% smaller and, at 106 x 55 x 17 mm and 124g, a lot features have been packed into a small space. Most of the size reduction has been achieved by making the phone much slimmer. The P990 looked a bit podgy, in a direct comparison the P1i looks waif like, but in reality is a touch thicker than the M600i. There have also been some small styling changes too, the P1i has a more modern look, with greater use of metallic highlights.

The immediate consequence of this is to ease multi-tasking - fewer applications will shut down in the background due to low memory (RAM). I saw 15 applications running at the same time on the P1i - and I would assume it can handle more too. Consequently, both the state of applications will be preserved more often and switching between applications will be faster. Perhaps even more welcome will be an end to the 'out of memory' errors that occurred when running RAM hungry applications such as the Opera browser. The extra RAM also, on the initial evidence, seems to have speeded up general phone operation; moving through menus and application functions is faster, with many functions being instantaneous. Outside of the early firmware stability issues, which have since been largely solved, the low available memory was, and to an extent remains, the Achilles heel of the P990. It is very encouraging to see that Sony Ericsson has taken this onboard and rectified the situation for the P1i.

The P1i's 3.2 megapixel auto focus camera produces excellent results, comparable to any other smartphone on the market today. The onboard Camera application draws strongly on the influence of the UI of Sony's Cybershot digital camera range and is extremely ease to use. Performance, in terms of shutter and image processing time, is also good, especially considering the size of the images and in comparison to its competitors, such as the Nokia N95. The camera is good enough to replace basic digital cameras, even the performance in low light conditions is  fairly reasonable thanks to the dual LED flash. As with other LED-based flashes, results do start to deteriorate when the subject is more than 3 or 4 metres away, but the P1i produces better results than many camera phones in this area. Video capabilities are also good and should be sufficient for most basic tasks and 'life recording'. The camera is used in one of the most innovative applications, the business card scanner which was first seen in the P990. I was skeptical at first, but with patience it does work as advertised. 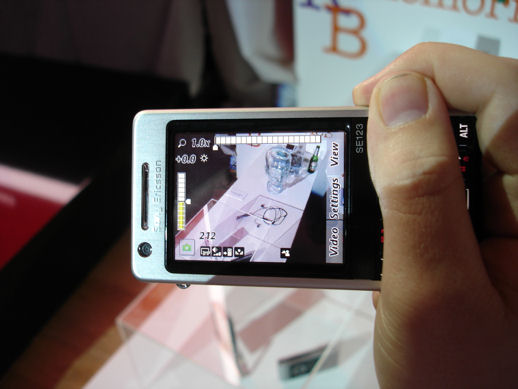 The P1i has a dedicated camera capture button on its right hand side.

Staying with the multimedia department, there is a slight UI tweak to Music player (supporting MP3, AAC and AAC+), added support for TrackID (identifying the name of a music track from a few seconds sample), support for stereo Bluetooth (A2DP), improved video support (now includes updated H.264), an FM Radio, an in-box HPM-62 stereo headset, a 512MB Memory Stick Micro (M2) card, to supplement the 160MB of internal memory and the standard Sony Ericsson port and cable for charging and syncing the phone over USB, with the accompanying PC software.

The P1i is a capable web and email platform; the Opera 8 web browser and basic but functional RSS feed reader are retained from the earlier models, as is the Certicom VPN Client and support for multiple email protocols (POP3 and IMAP4, including IMAP IDLE) and push email systems (AletXia, Ericsson mobile Office, Nokia Intellisync, Microsoft Exchange ActiveSync [provided out of the box via DataViz's RoadSync], Blackberry, Seven, Sybase and Visto). The onboard attachment handling of office document remains strong, thanks to the inclusion of the excellent Quickoffice suite and Pdf+.

The P1i runs UIQ 3.0, which means the software interface is largely unchanged from the earlier P990. Power users might be disappointed that the P1i retains version 3.0 of UIQ rather than the more recent version 3.1. However, there is little real difference between the two versions, partly because one of 3.1's primary aims was adding better non-touchscreen support and partly because much of the functionality has been 'back ported'. The UIQ 3.0 interface that runs on the P1i is significantly updated compared to the UIQ 3.0 that ran on the early P990's; the inclusion of support for Bluetooth 2.0 (not originally in UIQ 3) is an example of this. There are some exceptions to this - there is no support for OMA Device Management for example, but on the whole the differences are very minor. 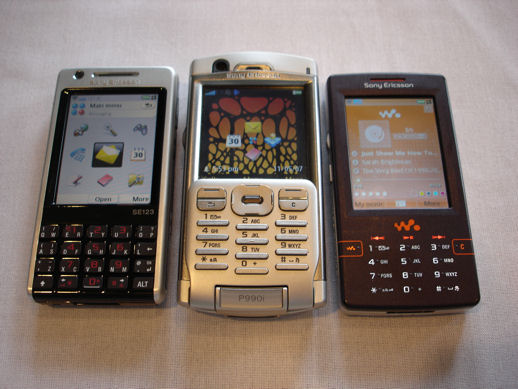 Even with the same version of the software platform, there are a few cosmetic UI changes in the P1i. One of the most notable and most welcome in the addition of an extra 10 shortcut slots in the 'Home Screen'. These are accessed via a small on-screen 'up-arrow' which resides just above the current shortcut icons. With 15 shortcut icons now available there is quicker access to more applications, it is a small but very welcome touch. Another change of note is the inclusion of a 'More applications' shortcut as one of the five defaults. This leads to a web page where you can access the Sony Ericsson Application Shop, with a number of free and 'try and buy' applications and other content.

The P1i white paper indicates there will be a broad range of 'try and buy' applications shipping with the device. These include a Skype client, a VPN Manager, Google Mail and Google Blogger applications, an AudibleAir client, a number of Epocware 'Handy' applications, and a number of others. The placement of the shortcut icons should go some way to helping to educate new users as to the extensibility of their device, advertising that add-on applications are available. This playing up of the open platform nature of the phone is a clever move as it is a key feature of UIQ 3 and the P1i. 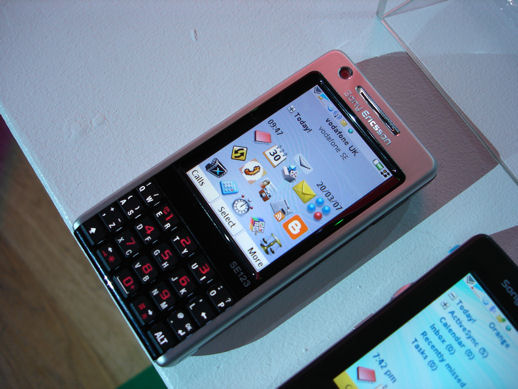 A number of extra applications may also ship pre-installed with the P1i. At the London launch, Sony Ericsson was showing off a DivX player and a VoIP client. The DivX player was able to play back impressive looking video in full screen mode. The VoIP client, UniPhone from OptiMobile, in one of its configurations is capable of roaming between WiFi and GSM networks, thanks to some back server handling. The exact form of the Uniphone software has not been finalised, and of course whether VoIP is available at all may depend on the decision of a user's operator.

The P990 did a lot of damage to the reputation of the P-series, especially amongst long-term loyal users who had upgraded from previous models, because of the instability and general poor experience of the flagship phone for the first 6 months of its life. However, I expect it to be a completely different story with the P1i, in the short time I had with the device I didn't experience any major problems. This is in sharp contrast to the early demo versions of the P990i, which were crash prone and buggy. Moreover the P1i has another few months development time to go before its public release. I am sure the P1i will attract a lot of fans and should go a long way to repairing the reputation of the P series.

For me the P series has always been about a synthesis between a PDA and a phone and I think the P1i is the best PDA/phone combination I've seen. It may not push the specification barrier in the same way as the N95, but it is an incredibly powerful device. By leaving the megapixel and convergence race to others (at least with the P1i), Sony Ericsson has created a mature, well rounded smartphone that will prove very attractive.