Thanks to an invite to the launch of the Sendo X, and Sendo graciously coming down to one of the All About Symbian Pub Meetings, we've managed to have a good look at the Sendo's Series 60 phone, the Sendo X, due out in the UK and Germany early next year. Here's what we think... 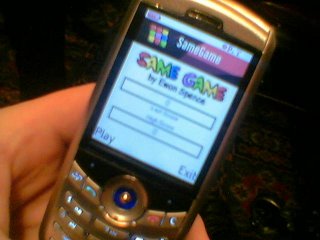 Looking at Sendo, you can't help but look back at the corporate history and their efforts with Microsoft and the MS-Smartphone platform. Sendo established themselves from the start as a Manufacturer who placed Network Operators as their primary customer. They supplied many 'Netowrk Badged' phones for the Pay As You Go market. When Microsoft were looking for a partner to be the first Smartphone in the market, Sendo saw a golden opportunity to become a major player, and signed up with Bill. What went wrong?

Well, that's in the US courts just now, but Sendo dumped Mocrosoft beofre the launch of the Z-100 Smartphone (and the rumours are it was only a week or so before the big launch). They switched to Symbian and Series 60, rolled a year's worth of marketing research into the design, and the result, annoucned almost exactly a year after dropping Redmond, is the Sendo X.

One of the main thing the research suggessts is that many people buy their phone/PDA based on having excellent specifications. Just two numbers here will convince you of this. The Ram available to run applications is 16mb (comaprable to the Nokia N-Gage), and the internal 'disk' for storing information is a bit more than the 4mb of the SX-1 or the 6mb of the Nokia 6600. Once everything is up and running, the end user should have 32mb for storage! And that's before you consider the fact that you could slap on a 1 gigabyte SD Memory card in the combined MMC/SD slot at the base of the phone.

You should really pop over to the Sendo site and have a look at the PDF Spec Sheet for the phone - that should answer most of your questions.

The Sendo X also has seperate chips to control the graphics and the sound. when a program asks the screen to do something, your regular Series 60 phone gets the processor to do all this calculating for you. Which it can happily do, but it is quite slow (in computing terms). The Sendo X does it a little bit differently. Rather than carry out the instruction, the processors now passes this out to a seperate chip (the graphics co-processor). While it's drawing what needs to appear on the screen, then processor is away doing something else. This makes any graphical operation much faster and smoother. For example, there's no blurring when you swing the camera around, it happily shows 30 frames per second. Sound is handled in a similar way.

There's no 3dfx or rendering in this chip, nor can the programmer gain direct access - it's there purely to speed up the display, so just write your applications as normal and let the Sendo X worry about shunting instructions around to graphics and sound chips (the sound chip works on the same principle).

Sendo have promised that the camera is now on a par with regular VGA Digital camera's and they make great play that this isn't a fun camera, but something you can do real work with. It'll be interesting to put this to the test when the production model arrives, but the inclusion of a digital zoom (currently only the Siemens SX-1 has this built in) and a flash - more a stronge white LED torch - with red eye reduction in software can only be a good thing.

Also known as Sendo's Jewel in the Crown, the Now! screen (don't you dare forget that exclamation mark) is where Sendo are pitching this phone at the networks. The Now! screen allows you to see at a glance the status of your phone - the inbox, the emails, memory and anything else that is programmed. Powered by XML derived plug-ins, the Now! screen can accept new features installed by you, by third party developers (an SDK is promised early next year) or sent to you by the networks.

This is where it does get interesting - I'm not sure if allowing the networks space on my phone that they can control is something I want - and I bet I get charged the GPRS download for any info their plug-in pulls down. So the jury is out on this feature... even though the networks are going to love it can they sell it to the punter?

The interesting things about the Sendo X is that although it looks like the Series 60 phone to have, I doubt it's going to be the biggest selling phone for one simple reason. Very few people have heard of Senod, up in the hub of mobile activity that is Birmingham. The only noteable thigns to come out of the Brummies are Ozzy Osbourne and Jasper Carrot. To that list we can add the Sendo X, but outside of a select few countries, I think it's going to be hard to find a Sendo X, and you'll be left with a straight fight between the Nokia 6600 and the Siemens SX-1.

And for those who seek out the grail, they will be handsomly rewarded.

(A full review of the Sendo X will be along just as soon as we get our hands on some release spec units).