Rafe takes a look at Panasonic's second Series 60 phone the X800. Panasonic officially launched this phone at 3GSM. It features design and multimedia changes from it's predecessor the X700.

Panasonic were showing off their second Series 60 phone at 3GSM. The X800 is a GSM tri-band flip style Series 60 2.0 phone, it is the thinnest and also one of the smallest smartphones announced to date. While the styling may not appeal to all it was turning heads in Cannes if only for its slim lines. The only major difference with the X700 is the design change, but the X700 was already well specified.

In reality the X800 is very much the X700 with a tweaked designed and upgraded camera. As with the X700 the X800 is aimed at the higher end of the market with business users in mind which is reflected in the inclusion out of the box of the award winning Quickoffice suite. This means you'll be able to handle, both viewing and editing, the commonest Office attachment types you might receive by email. The bundling of 3rd party software is increasingly common in the Symbian world and is being used by manufacturers to differentiate their products. There is room for more of this course, but it shows an increasing trend to try and improve the user experience out of the box, and Panasonic are no exception in this.

The phone has excellent connectivity options with support for Infrared, Bluetooth and USB for connecting to and synchronization with a PC. Like other Series 60 licensees Panasonic will be using their own version of PC Suite based on the mRouter connectivity option that is a standard Symbian / Series 60 offering which is starting to look a bit long in the tooth, especially when compared to Nokia's latest SyncML based PC Suite. It does work, and as Sendo proved with their version can be stable, but it has caused some users some problems – we'll report more on this in the final review.

The phone has somewhat better multimedia support that its predecessors, unfortunately the camera remains VGA, but it does now have a LED flash. From brief testing the quality of the images produced seemed good and had some of the extras you might expect (different sizes, modes). The software Photobase from ArcSoft (another example of 3rd party software) is included on the phone for managing photos and works well enough, but is a little slow with large photo collections. The LED flash can be turned on an off via a dedicated application on the phone. The most obvious use for this might be for taking photos in low light conditions. However it works even better as a torch. This might seem like a rather expensive torch, and I do not what to think about what it might do to battery life, but I've lost count of the number of times I've used my phone's screen for finding things in the dark. The camera can also be used to capture video which can be played back using Real Player (supporting 3GP, Real Audio and Video). Memory can be expanded via the miniSD card which is hot swappable. This should give plenty of storage room for photos and for storing files. Unfortunately the phone still does support MP3 directly, but Panasonic did point out there was third party software available for this. 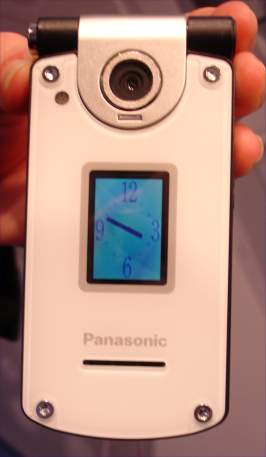 One of the shortcomings of flip phones is the need to open them before you can start doing anything. As in other flip phones the X800 partly gets round this by having a second LCD screen on the outside of the unit. In the X800 this is a 96 x 64 STN 4,096 colour screen. The default view for this is a clock but via a button on the side of the unit you can switch to a view where you can see network, signal strength, battery strength and other status information. This screen will also indicate missed called, text messages and similar telephone related information. Although I didn't test this functionality I was advised that the screen is also capable of showing a callers number and, if available, their picture when the phone rings.

Once opened the screen is clear and bright, and the display model looked like it had a 252k colour screen rather than the quoted 56k colour screen. Like the X700 the physical screen size is also slightly smaller than comparative phone which increases densities of the pixel making the screen easier to read. Additionally the screen is not recessed very far into the body of the unit which means it looks brighter and more vivid that similar phones. They keys are nearly flush with the body of the unit, but despite this they had good feedback. The space available could have perhaps been better used, but there are benefits from having keys slightly more spaced out that smartphone users might be use to. The four way navigation key in particular, thanks mainly to it size, was easy to use, although it might not be well suited to gaming.

The size and weight of the phone, at 100 x 48 x 17 and 99 grams, is going to be one of the main selling points and in the hand it does feel very small. It is comparable to the smaller candy bar smartphones when closed which is rather impressive for a flip phone. Compared to the X800 the Nokia 6260 feels monstrous, and I'm sure many 6260 users will be looking to upgrade to a Panasonic phone if Nokia don't improve on their Series 60 flip phone. The size of the X800 means it looks and feels much more like a normal sized phone than the larger smartphone we have been use to date. This perception is all important in driving uptake of these phones, and I suspect it is this together with it looks, rather than it's feature set, that will drive the uptake of the X800.

The X800 is 7mm thinner than the X700, but because it is not as rounded it is slightly larger in width and height. There is a silver push button on the top of the phone which will open the phone via a spring action. Once opened the phone is surprisingly long, but this does give you plenty of room to hold the phone in an optimal position.

The X700 was weak in multimedia areas, and this is not much better in the X800, and it the design change that is the only real advance. This should broaden the appeal of the phone, but its disappointing that the camera and multimedia support has not been improved. Panasonic expect the phone to launch in Asia shortly (within the next few months), but were unable to give any information on US or European availability. It would be a shame if these markets did not see this diminutive flip smartphone, since it has a lot of potential, and is by some way the best flip smartphone of any OS on the market.

Update: Panasonic let us know that the camera is in fact VGA (not 1.3 megapixel) as previsouly stated, and that the phone does not directly support MP3. I've updated the preview to reflect this.