Steve Litchfield explores the world of RAM on the Nokia N97 and N97 mini, discussing what Nokia got wrong and what you can do to keep things on the rails...

The problem with RAM (Random Access Memory, along with the processor, the physical engine that runs a smartphone operating system) on S60 5th Edition devices like the Nokia N97, N97 mini, X6 and even the 5800, is that when Nokia's design teams specified the hardware, a 128MB RAM chip was though to be enough. Yes, the N95 had had problems with a 64MB chip, but the ceiling had now been raised to 128MB for the N95 8GB and, after all, wasn't S60 5th Edition largely the same OS? Surely the same chip would be enough?

Unfortunately, S60 5th Edition turned out to need more RAM when running (because it's larger, doing more things at once, managing a larger display area, etc.) Whereas the typical Nokia E90 or N95 8GB booted up with about 80MB RAM free, the N97 and its sister devices boot up with 'only' 50MB or so. This figure would still have been fine for yesterday's devices, but applications that run under S60 5th Edition also need more RAM. We've now got applications that run a larger, more varied interface and which, quite often have to deal with large media files or complex Internet resources. The end result is that, with some heavyweight web pages loaded, and with Music and Photos and everything else all trying to hang around in RAM, you're likely to start seeing applications closed down in the background by the operating system - which can get irritating for a power user, used to flitting between apps.

But being hamstrung by RAM isn't inevitable. Let's see what the Nokia N97, with its 128MB RAM chip is capable of... 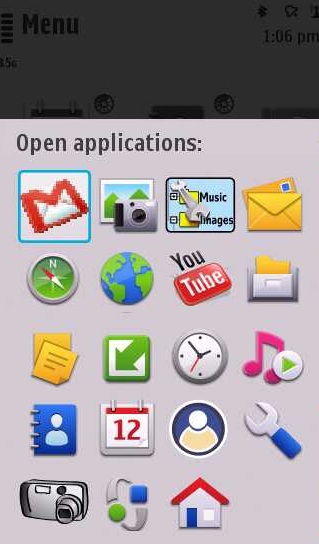 You may remember Dotsisx's demo of RAM on the Samsung i8910 HD last week - 50 major S60 applications all running in RAM (of which the i8910 HD has 256MB) at the same time. This was a direct response to a demo of the RAM on the Palm Pre Plus (which, incidentally needs twice the physical RAM - 512MB - to achieve the same feat, a tribute to the efficiency of Symbian OS) and both, if we're honest, were rather artificial - noone in their right mind would have 50 apps all loaded in RAM and running at the same time in real life. Even with the best multitasking OS in the world, there would be a hit on battery life, for one thing - never mind confusion over how to actually get to each of the 50 apps via a multitasking menu.

The screenshot on the right shows (with a long press on the main menu key, showing what's currently running) how far I  got when trying to replicate the feat on the Nokia N97. Note that, like Dotsisx, I was mostly steering clear of the tiny trivial apps and utilities which S60 has in abundance - I was looking at major applications that users might actually use. The cropped screenshot on the right shows 19 applications/user processes all running at once - on an N97! No, really. In case you don't recognise all the icons, we have:

Now, this was me simply seeing how far I could push the N97 - trying to launch a further application caused the OS to shut down a few of the candidates show here. As did trying to do more with the apps that were open - for example, trying to open a bigger web page or changing the zoom level in Ovi Maps or adding an extra Twitter account to Gravity.

But my 'pushing the limits' test does at least prove that, limited though the RAM on the N97 is, there's potential for some useful multitasking, even if you have to be rather more careful than you would on, say, a Samsung i8910 HD.

Yes, some of the above concurrently running apps are a little trivial, but many aren't. Being able to leave the Twitter client Gravity logged in and music playing in the background while you look up something on the web and check your email, is real-world-useful.

Can you add to this list of strategies to make the most of the Nokia N97's limited RAM?