I've seen the future... and it will look a lot like an iPhone

Steve Litchfield is blown away by several aspects of the Apple iPhone that he's been reviewing and reckons that he's seen the future of mobile computing... Now, now, don't over-react. Let's get a few statements of opinion out in the open:

Steve Jobs was absolutely right in one regard, when he made his charismatic iPhone launch speech, talking about existing smartphones as having 'too much plastic'. Though as I found out in my own reviews (e.g. Smartphones Show 38), the current 'plastic' (though often aluminium as well, to be picky) devices currently run rings round the iPhone in terms of what they can do, and point the way to the sheer amount of work Apple is going to have to put into adding functions, integrating Bluetooth and 3G, working their way through the minefield of third party applications, security, and so on, in order to catch up to where Symbian OS 9 is today. BUT, and it's a big, big BUT, the vision behind the iPhone, of a one-piece device with no moving parts and a full-face screen that can display the perfect interface for whatever application is required, is spot on, in my opinion. And it's at this point that I need to make a big admission.

I was wrong about touchscreens. No, not the type of resistive, pressure-sensitive touchscreens used in the current Sony Ericsson UIQ 3 devices and most Windows Mobile devices, which reduce contrast to the point of invisibility when outdoors and are relatively delicate. And not the kind of touchscreen interfaces (same culprits) which require millimetre-precise taps from a spindly stylus. I was right about the above.

But I was wrong to dismiss the idea of touchscreens. Because Apple has been bold enough to invest in and introduce a device with a capacitive touchscreen, meaning that the top surface can be hard, i.e. glass, and, with the use of the different technology, have managed to produce a display that's as clear as most of my S60 non-touchscreen smartphone in sunlight. The final point, about fiddly touch interfaces, has of course been overcome by their development of an entire GUI that's designed around finger-friendly icons and virtual keys.

To create an entire GUI from scratch hasn't been trivial, and to make things even harder, Apple had to contend with the thorny problem of text input. How could finger input work on a screen that's only 2" wide? Their answer was in innovative software again, with next generation predictive software that monitors where your fingers hit the keyboard and guesses the word you were probably going for. So, for example, if you hit 'rgw' on the iPhone, you'll get 'the' when you press the (virtual) space bar. And you'll still get 'the' if you type 'ybr' and other possible miskeys.

In practice, this means that you can stab away, typing as fast as you can and leave it to the software to work out what you were trying to say. The built-in dictionary is phenomenal - I tried catching it out with "Wolverhampton", and the blessed thing even knew this fairly obscure UK place name! Of course, as with any predictive system, there are the occasional lapses where several word options are possible, but I was still able to top 20 words per minute on the iPhone, which is probably 'good enough' for SMS and short emails. Entering web URLs is trickier and this will always be faster on a physical keyboard, with no software layer.

In fact, a physical keyboard (e.g. on the Nokia E61i or E90) is faster overall, with around 27 wpm on the E61i, for example. But 20 wpm is still as fast as most people can enter text using multi-tap or T9 on a phone keypad, proving that Apple's intelligent virtual keyboard definitely has a place.

There are some cost issues, of course, with a capacitive touchscreen being at the pricey end of consumer electronics, but the general principle of a tablet form factor with adaptive interface is very Star Trek and, now that I've played with an iPhone for myself, I'm convinced is where the future of medium to high end smartphones will end up.

All of which is a long way from me saying that the iPhone will immediately take over from current smartphone champion Nokia, with its mammoth S60 success story. The sheer size of S60 takes some grasping. Apple has been rightly pleased to sell over a million iPhones in its first week, the initial peak, although no doubt healthy continuing sales will follow. Nokia has been selling well over a million S60 smartphones every week for the past 3 years. That's a lot of inertia.

Then there's the hidden but significant step of integrating the latest cutting edge communications technologies into OS X. Symbian OS now has a mature and secure real time kernel with full 3G, HSDPA, GPS (and every other acronym you can think of) support, whereas Apple is still struggling to master Bluetooth (you can't yet even beam photos to other devices, for example). Such wizardry in the mobile world takes time and effort to develop, trust me.

And while Apple improves its iPhone applications, adds to them, weaves in a secure method of adding third party applications, develops its own comms modules, over the next year or so, Symbian and its licensees won't be idle, taking Symbian OS's current maturity and extensibility, adding support for even newer hardware and crafting new ways of making S60 (and UIQ and MOAP) easier and more intuitive to use.

So, although I was utterly in love with the iPhone and its concept, it only took a few minutes to start racking up things which I expected from a smartphone but which it simply wouldn't let me do (e.g. the photo beaming, or running games, or copying text between apps, or recording video, or using a stereo wireless headset, or finding my GPS position, or sending an MMS, the list is quite long...) Apple now has the hardware of the future and the interface vision of the future (and I'm talking years here, not months), of that I'm in no doubt. But Symbian has the OS of the future, with technologies that are hard won and constantly being battle proven in the real world. 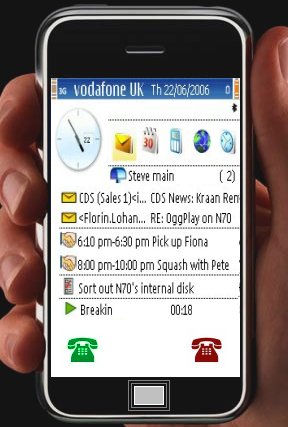 No, I don't think the traditional keypad-based candy bar form factor is going away anytime soon, at least not in lower end devices. The lower build cost, the greater ruggedisation, the requirement for less functionality, all will help keep the candybar (and clamshell) in business. What's going to change is the increasing use of iPhone-like capacitive touchscreens, enabling monoblock devices with very few buttons and larger, more flexible user interfaces.

Both S60 and UIQ have full support for touchscreens and the iPhone has shown that this technology can now be used in the real world without compromise.

September 2007: Apple will announce a 3G version of the iPhone for Europe, with better Bluetooth and subtle app tweaks, for availability for Christmas.

January 2008: Apple will announce iPhone 2, with better camera and built-in GPS, along with their own secure 'signing' system for third party applications.

I've seen the future and it looks a lot like an iPhone. If you don't believe me, rent a few episiodes of Star Trek Next Generation and watch what the bods in the 25th century stroll around with....

Filed: Home > Features > I've seen the future... and it will look a lot like an iPhone