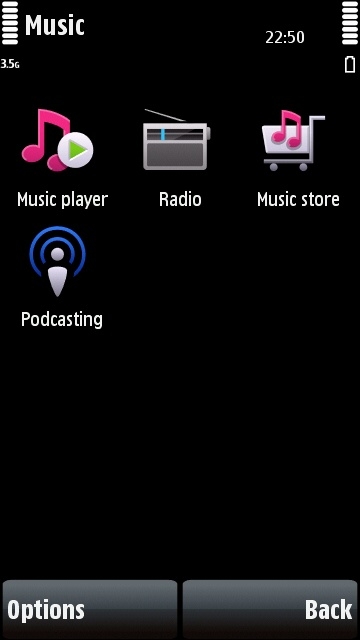 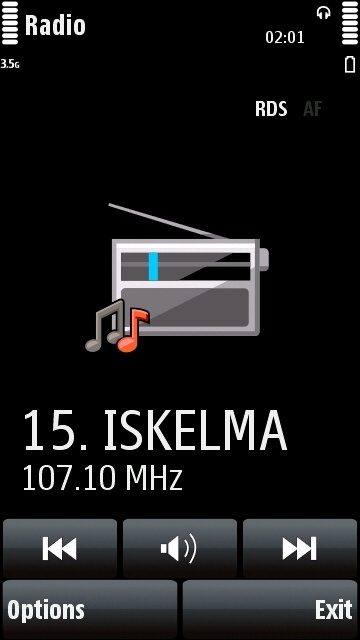 How to use the FM radio on the Nokia 5800 XpressMusic

The 5800 comes with a built-in FM radio, which also includes support for RDS and AF data transmissions.

Here's how to use the FM radio:

1. Plug some headphones into the 5800. FM radio requires some kind of aerial, and in a mobile device this is almost always the headphones. You can use any brand of headphones with the 5800, as long as it has a standard 3.5mm jack on it.

2. From the main standby screen, press the white menu button.

5. If this is the first time you've used the phone's radio, it may automatically ask if you want to scan for stations. Say yes.

6. If it doesn't ask you to scan for stations, you'll have to start the process manually. Do this by selecting "Options", then "Tune Stations", then select the "Scan Stations" button (the four grey curved lines in the middle).

8. Once the stations are saved, go through them one by one using the "Next Station" button (the arrows pointing right) and allow the radio's RDS system to pick up each station's name. Once it has picked up the name, it will automatically save it for next time you use the radio.

Useful tip for using radio while away from home: If you're travelling outside your local area, you can repeat the above process to find out what stations are available in your current location.

Here's a general guide to using the radio interface: 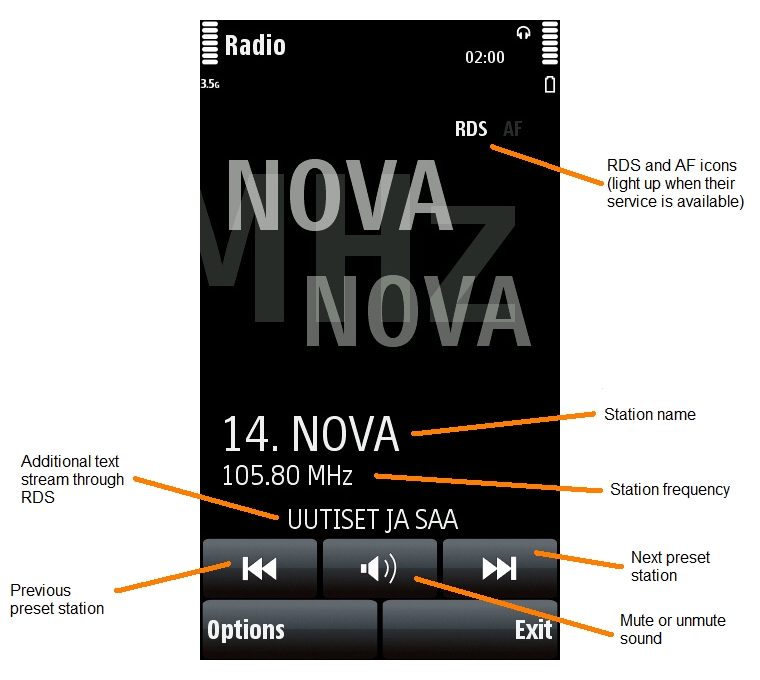 How do I change the radio's volume?

Touch the middle of the screen and a volume slider will appear, just slide it up or down to change the volume: 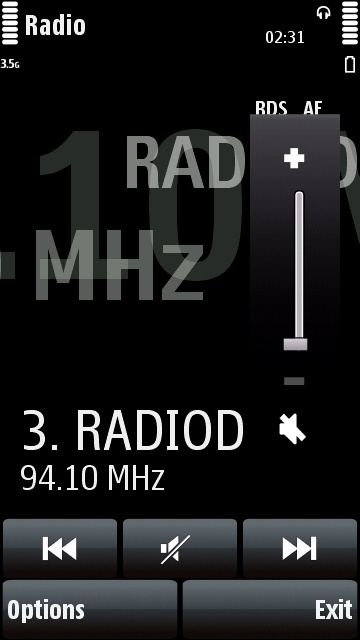 Can I listen to the radio through the phone's loudspeakers?

Yes, you can listen to the radio through the speakers, but you must still have the headphones plugged in to act as the phone's FM aerial.

To switch speakers on while listening to the radio:

1. Activate the radio application and tune it to the station you want.

4. To go back to headphones, select "Options" and then "Deactivate Loudspeaker".

What is RDS? Does it cost anything to use?

RDS (Radio Data System) is totally 100% free for everyone. There are absolutely no costs for using RDS.

RDS is a special system that allows radio stations to include text with their usual audio broadcasts. This text can be picked up by any RDS-equipped device, such as the Nokia 5800. The RDS system has been used throughout Europe and South America since the 1990s, and is most common in car radios, but it is increasingly becoming available in other electronic devices such as mobile phones. There's also a nearly-identical system in North America called RBDS (Radio Broadcast Data System) which does exactly the same thing.

Most stations just use RDS to broadcast their name, but some may also broadcast a second stream of scrolling text which contains a brief news item or advertisement. This will appear on the 5800 below the station name.

Some stations use RDS incorrectly, in which case you'll see the name and the second text stream the wrong way round, or other similar mistakes.

What does AF mean?

AF on radios stands for Alternative Frequencies, and is a part of RDS. The idea is for a station to broadcast other frequencies on which the station can also be picked up. Radios equipped with AF support will automatically switch to the station's alternative frequency when the current frequency starts to break up.

To enable AF, select "Options", then "Alternative Frequencies", then "Auto Scan On". To disable AF, choose "Auto Scan Off" instead.

How do I name stations manually?

If you can't get station names to appear automatically through RDS, or if RDS contains a mistake, you can name stations by hand:

1. Make sure you've scanned and saved your available stations using the method earlier in this article.

4. Select the station you want to name or rename.

How do I seek stations manually?

There's no real point in tuning manually, the automatic scan described at the beginning of this article does everything that a manual scan does and saves you the bother.

However, if you're in a situation where a manual scan is required, here's how to do it:

1. Make sure you've got headphones plugged in and activate the radio application.

5. To go back to the normal radio interface, select "Back".

Some earlier Nokia phones had an FM station database system where you could download FM station details for locations around the world through the phone's internet connection. However, this was expensive to use for some people (because it required an internet connection through the phone network), it was useless in areas without a phone signal, and it would probably have been a lot of trouble for Nokia to maintain as it would require constant updating.

It's cheaper and easier for everyone to just use the existing radio data service, RDS, which provides name data to everyone at no extra charge.

Filed: Home > Features > How to use the FM radio (and RDS) on the Nokia 5800 XpressMusic