Ear to Ear - The Battle of the Phone MP3 Players

Let’s face the music and dance, as Nat King Cole would say. With the recently arrived W950 aimed squarely at the music based smartphone market, it will inevitably draw comparisons to the Nokia N91, and the ever present spectre of the iPods (even before this week’s announcement of the Newton-esque iPhone). So how do they all compare in the most vital function… playing back music. Lets look at the contenders: 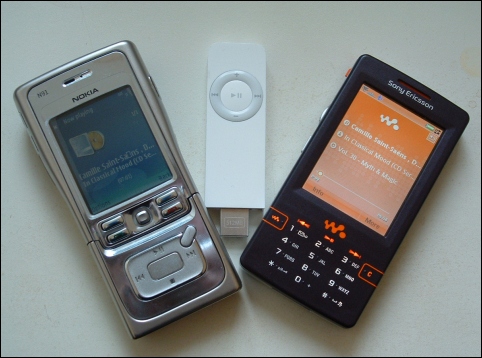 The Sony Ericsson W950
In the orange and mystic purple corner is our new challenger, the W950, with 4MB of flash memory, a stylish form factor, and the latest UIQ software; all carrying the well known ‘Walkman’ brand from parent company Sony.

The Nokia N91
Nokia’s N91 is now available in both the 4GB and 8GB hard drive-based models, and has had a good number of firmware updates to keep it up to date (notably adding in stereo Bluetooth headset support).

The iPod Shuffle
Why the Shuffle I hear you all ask? Mainly because it’s the one I have – and it is reputed to have a slightly better sound than the rest of the iPod range..

As part of the test, it’s important to keep everything else as similar as possible, and for that reason the same set of headphones will be used for each device. In the real world, of course, you'll be using the bundled headphones, or your favourite pair, in noisy environments, but the purpose here is to subjectively measure the playback quality of the music files - nothing else. The headphones are a set of high quality Ultimate Ears in the ear headphones. For the music, I have set up each device with a playlist of two tunes, and each phone will use the same MP3 files (which are encoded at 160k, 44.1kHz and a constant bit rate). I’ve also chosen two tracks which represent the widest range of musical tastes, sounds and instruments.

The first track is from Australian gods, AC/DC. Thunderstruck (from the 1990 album, Razor’s Edge). I’m totally familiar with this song, mainly because I use it to warm myself up and get the adrenaline flowing before I record a music podcast or go out live on the local radio station in Leith. Lots of drums, bass guitar, screaming vocals in all ranges, and a delicate guitar riff, all overlaid with each other.

Secondly, I chose a piece of classical music, the Danse Macabre, the 40th opus by Camille Saint-Saens. A very small part of it was used in the BBC TV Series Jonathon Creek, and I’m pretty sure it influenced the music for the Harry Potter films. It covers a wide range of orchestral music, with some xylophone work, loud crashing and soaring majestic sections, and using a huge range of instruments.

Finally, the test is being done blind. I’m sitting in my office chair and all the phones are being controlled by a third party, out of sight of me. The equalizers, bass boosting, and other twinkly bits have all been switched off, so the sound is the out the box sound (and the iPod Shuffle has no settings on the device in any case). And of course this is all the subjective thoughts of someone who has happily moshed away in front of speaker stacks the size of houses in his youth...

Scores on the Doors

On to the markings. The devices were rated in order, three times for each tune, on the bass noise reproduction, the treble noise reproduction, and the overall ‘niceness’ of the sound.  The best device per category scored a ten, second place got nine, and third place scored eight. Ties meant both devices got the higher score.

What surprised me, once the scores were added together, was just how close they were in the end. If you had asked me before, I would have expected that there would be a clear winner, but in fact the W950 and the N91 drew for first place, with the iPod Shuffle only narrowly behind.

What is clear is that the choice of music that you listen to should have a bearing on your choice. Nothing came close to the W950 when asked to play a little bit of Rock in AC/DC – scoring 29/30 it left the competition for dust. Unfortunately it just failed to measure up to the N91, which walked away with the top score for the Orchestral Danse Macabre. I’m not sure how to interpret the iPod results.

The W950 seems to cope best when there are a lot of different instruments and vocals playing on top of each other, while the N91 seems to go a bit muddy – but ask for something more delicate, and the N91 is going to step into the spotlight.

So can I recommend one of them (over the others) based purely on the sound quality of the MP3 player? The honest answer is not especially – sure someone can come up with a frequency analysis, and a bundle of graphs and charts to show which one has a few Hertz clearer than the other, but they are incredibly close to each other – when you’re out and about, on a basic set of headphones, listening on a busy bus or train, I think the only thing you’ll notice is that you’ve got some of your favourite music on your phone.

[Ed's note: Along similar lines, filming the W950i for Smartphones Show 22, I commented to camera that the days of individual devices underperforming in the stereo music department were probably over, with the limiting factors being the quality and fit of the headphones used, the environment in which you listen, the encoding format and bitrates being used and the quality of your own hearing.]

Filed: Home > Features > Ear to Ear - The Battle of the Phone MP3 Players