Putting similar form-factored smartphones from different manufacturers is always interesting, especially so when one of these devices is a much-talked about hybrid of technologies from two previously competing companies. 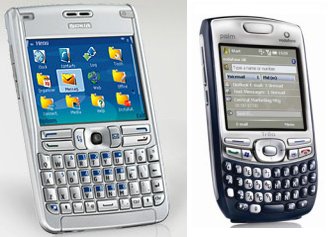 The Nokia E61 is unusual for Nokia, (apart from the E70) their only keyboarded S60 smartphone. The comparison below also applies in the main to the E62, a version for the US market, by the way.

The Palm Treo 750v is the first Europe-marketed Palm Treo running Windows Mobile - gone are the days when Palm and Microsoft are arch-enemies. The Treo 700w (in the USA) and 750v represent Palm's attempt to take the standard Windows Mobile interface and add their own (significant) usability tweaks.

You'll have picked up from the comments above that both devices have their strongpoints and that picking an overall winner isn't really possible. It's fair to say that the Treo 750v really surprised me, though. It feels superb in the hand, is quick and responsive and has an acceptable camera. At the end of the day though, the clinching factor for most people is going to be keyboard size - if you're going for a device with a qwerty keyboard then you want one you can use without continual mistakes - the Treo's is perhaps just a little too small, but it's certainly worth a try if you're passing a Vodafone shop.

PS. There's a video review of the Palm Treo 750v in Smartphones Show 17