Are smartphones 'smart'? Not according to Apple...

In his controversial iPhone launch back in January, Steve Jobs questioned whether 'smartphones' were really all that smart. In their place, he ushered in the iPhone (with the famous '5 years ahead' quote). But, comparing like with like, how does the iPhone stand up to a direct comparison with the cream of the competition?

Apple themselves are still drawing direct comparisons, curiously, as in this press release. In concentrating mainly on battery life, Apple doesn't really show the whole picture, of course, but then it was PR promoting the fact that the iPhone's battery will last longer than they initially thought it would, which is fair enough...

But let's look at the iPhone from the point of view of Jobs' talk, i.e. aimed at replacing existing smartphones. (though personally I think it will do better in the iPod upgrading market). I'm comparing the iPhone with the Nokia E61i and N95, the Sony Ericsson M600i and the Palm Treo 750: 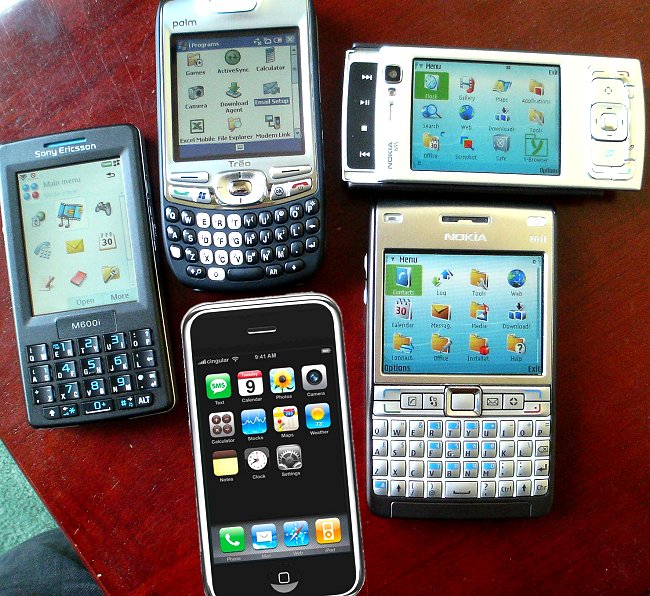 OK, ok, it's a fair cop. I haven't actually got an iPhone yet, but I'm close (see below).... which explains the one mock-up device image above 8-)

My reasons for choosing these devices:
The E61i: Jobs showed the E62 up on his iPhone launch screen, the USA variant, but I'm in Europe and so have the (more function-rich) E61i!
The M600i: Although not in Jobs' line-up, this has very much the same emphasis as the Treo 750, E61i, etc. and adds a touchscreen, bringing it more into Apple's way of thinking.
The N95: Not on Jobs' launch screen, but very much on his 'radar', I suspect, this multimedia-centric smartphone directly appeals to a lot of the iPod/iPhone demographic.
The Treo 750: This was on Jobs' screen, albeit probably in a USA version.

Several things leap out from this comparison, of course:

Incidentally, I will be getting (with my Smartphones Show hat on) an Apple iPhone, for test purposes, in the first few weeks of July, and it will be interesting to see the much-hyped new GUI in action for myself.

Touchscreen good, keyboards bad?
No, no, no, there's a lot more to smartphone design than that - those keyboards are there for a good reason!

Filed: Home > Features > Are smartphones 'smart'? Not according to Apple...