In which Steve realises that your smartphone should always help and never get the way of real life, and muses the fact that there's really no such thing as the perfect mobile device for everybody.

Apple crumble or Lemon Meringue Pie? Which would you choose? It's tricky when they're both as tasty as each other. But, unless there's enough to go round and you get the chance of both, you're going to have to make a decision and live with it.

Here's a thing. Like most men of my generation, I've always carried a Victorinox pen knife somewhere on my person. Every single day there's a need at some point for a knife or screwdriver or similar, they're just so darned useful. Mine had about 15 different functions. But having this relatively huge knife hooked through my jeans belt loop was always a bit of a pain, sometimes literally so when I sat down and it jabbed me in the side. Very useful, yes, but it did sometimes get in the way. Today I use the slightly less capable but far, far less conspicuous Utilikey, which is shaped like a key and no larger or heavier. It simply sits on my car key ring in my pocket and I totally forget it's there until I need to cut, saw or screw something.

Back in the (very) early days of Palm OS, there was a rule of design that you should never have to say to someone else (on the phone or in person) "Hang on, I'm just waiting for my PDA to open the right screen". In other words, your device should never get in the way of real life and real communications. How often have you had to ask someone to wait while you struggled to enter their details or look something up? In an ideal world this really shouldn't happen. For the uber-geek, of course, half the fun of PDAs and smartphones are in wrestling with them and making them do more and more in increasingly elaborate ways. But for the rest of us, like the Utilikey mentioned above, our smartphone should be a tool that's always there, always reliable and yet never gets in the way of what we want to do.

So what, pray, brought on some of these musings? I documented last month my successful downsizing from my Nokia 9500 Communicator to the far smaller S60-based Nokia 6630. I've now used the 6630 for two months and have loved the Megapixel camera, the general speed of its applications and the sheer range of both serious apps and games. But I found that whenever I was with someone (or worse, on the phone) and trying to enter details or notes when under pressure, the 6630's keypad and predictive text system, although impressive, was by far the limiting factor in what I was able to get down. Every time someone started to give me their address or directions, a slight feeling of dread would come over me, realising that because of the presence of names and other non-dictionary words, I was going to have to use lots of brain power and dexterity getting what I wanted into my electronic brain. Quite simply, despite all its other attributes, the S60 smartphone was starting to get in the way.

And so it was back to the 9500 and a useable Qwerty keyboard for me. With the onset of winter, there's less need of the 6300's megapixel camera and returning to a proper keyboard did come as something of a relief. And I hadn't realised how much I'd missed the absolutely huge 640 pixel wide Series 80 screen, which comes as a bit of a shock after 2 months with S60. 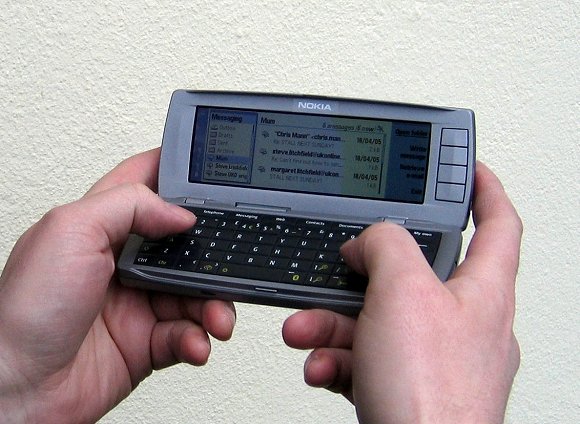 Yes, I did have good results with my 6630 and a Bluetooth keyboard. Perching the smartphone on top of the keyboard and typing away at a long article that I had time to work on properly wasn't a problem. It was all the other stuff, ad-hoc entry, appointment details and notes, for which it's rarely convenient to stop everything, break out a folding keyboard and get two devices talking to each other.

A perennial subject of Internet forums is 'What would be your perfect PDA or smartphone?', with correspondents chipping in with their favourite features. The debate will go on forever though, as there's no such thing as a single device that's perfect for everybody. In this case it was the keypad versus keyboard question which persuaded me back to the 9500, but for many other people occasional predictive text entry on a keypad is a perfectly reasonable compromise to make in order to gain a dramatic decrease in smartphone size.

Similar divides open up for the question of whether or not there should be a camera (security issues in companies usually being the driving factor here). And another opens up for the issue of whether there should be a delicate touch screen and stylus operation, or whether a key-driven system with nigh-on bullet-proof screen is best. Still another hangs on whether a one-piece robust design is best or whether you prefer a more flexible clamshell arrangement.

We're nearly in 2006 now, Symbian's very much in the ascendant, totally dominating the worldwide smartphone market, and there's plenty of choice of models. The Sony Ericsson P990 and new Nokia N and E series models will broaden your options still further. Everybody's different and it really is good to have a choice, whichever 'pudding' you opt for in the end.