30 Minutes with the Siemens SX-1

Talk about long term Techno-Lust. Siemens announced their impending Series 60 device right back at the start of the 2003. Now, almost twelve months later, with production units almost ready for sale, All About Symbian can present the first impressions of the SX-1, possibly the SeX1est Series 60 phone yet (and that pun was thanks to Jim Hughes).

Class in a Glass?

The SX-1 looks nice. Really nice. In fact, put the lights down low and it's as seductive as Jeff Bridges in a Disney movie. The bottom button pad is smooth, and looks like it was cut from a single sheet of perfectly rolled glass, the side buttons move effortlessly down in the machine (but can't be pressed in on the sides, so bang goes any chorded keyboard input), and the whole thing just looks cool, in an effortless 'look what I've thrown on, dah-lings' way.

The big thing on the SX-1 when you see it is the number pad; there are two strips of numbers as opposed to a traditional number pad. This makes for a compact device, but does take some time to learn. I have to be honest though, that within a few hours, I was up to the same sort of speed as any new device... but I stil prefer my 7650. Probably because it was just like my 7110.

So, to the styling. It's futuristic. One of the big problems of Series 60 is the fixed screen size, plus the 17 buttons and joypad cursor that need to be accomodated. Ask yourself how you would do it? Most manufacturers are going to resort to the keypad below the screen, so hats off to Siemens for (a) coming up wih such a wacky layout and (b) making it work!

That's right folks. For all you people worrying about those side strip numbers, rest assured that after 15-20 minutes you feel okay about using them, after 40 minutes you're hitting some wihout looking, and within the hour, you're feeling at home with them. Okay you're not going to be perfect, but you'll have the hang of it. And thanks to the training game bundled with the machine (it's a sort of Space Invaders / Operation Wolf shooting game that makes you use the number pad and text entry to fire) Siemens have given you the best possible start.

The SX-1 is a lovely looking machine. It just looks right - and thats no small achievement nowadays - the 3650 never managed that, and the 6600, while great in shape feels a bit tacky in the hands. Big plus point in the SX-1 column here, because it doesn't feel like it's been run over by a steamroller. And the MMC door... the N-Gage designer should look at this. The prototype had the MMC under the battery, but now... Tucked away nicely, slides out, door drops down, MMC is accessible. And the SX-1 stays switched on. So is this the hot-swappable MMC card the N-Gage should have had? 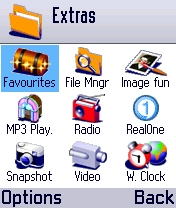 What's surprising on the SX-1 is the sheer number of applications that are there when you switch the machine on. Even for a hardend 7650 power user like me I was swamped by icons, folders that looked like icons, and applications that looked like folders. Who knows what the newbie user is going to think. There's an argument here that more of these should have been shipped on the CD rather than in ROM. I know we all scream for a File Manager, but does the average person buying a phone need one built it? Possibly, but not on a first gen smartphone.

Just like the N-Gage, the SX-1 ships with an FM Radio. It works (only when the headphones are in) and its reception is almost perfect. And using it is shows it has one big advantage over the Game Deck. The simple addition of FM-Mono (so where I get dodgy reception I don't constantly have Terry Wogan on the centre, then in surround sound, which is so scary you need to hear it to understand just how off-putting this can be).

The SX-1 is a phone I could live with on a daily basis. It has all the best features of the ealry Series 60 phones, improves them, and has been through an extensive testing process. Thre's very little it is lacking (a nice carry case?) and the key strip isn't the drawback I thought it would be. THe only thing was the sheer number of apps - but a few of my own folders (that use the default image) and deleting the Siemes supplied one help me organise the main screen into something I could use. 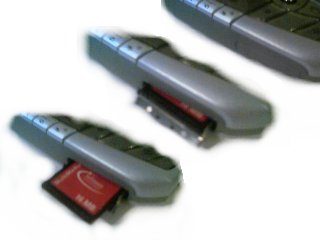 The big question is, what's it like compared to the 6600. Short answer is, I don't know, we haven't recieved any review 6600 units from Nokia. But it's running Symbian OS 6.1, not 7.0s, so the compatibility problems plauging the 6600 don't apply here. It has the MMC slot (like the 6600) the gorgeous screen (like the 6600), and now Nokia are noing normal keypad machines, it's about time someone else took over.

Any clouds on the horizon? Just one. Sendo. The Sendo X is the geek chic killer phone of 2004 and it blows every other Series 60 machine out the water. But a small Birmingham company doesn't (yet?) have the brand awareness that Siemens does - and if you want a phone that's not Nokia, the obvious smartphone to turn to is the sexy SX-1.

Ladies and Gentlemen, Munich has another winner. Now where's my tickets to Oktoberfest...