Camera 'angles' are an odd thing. Back in the day (2005-2015), all a phone camera needed to do was shoot a single, standard (90° or so) photo of a scene, as well as possible. Job done. Various smartphones experimented with zoom (notably the famous 808 and 1020 pair), and from 2015 smartphones with extra telephoto lenses started to appear. But LG went in a different direction with its G5, building in a 130°+ wide angle camera as the phone's 'secondary'. And the idea caught on, with as many dual camera phones coming out in 2020 with 'main and wide angle' as 'main and telephoto'. Could it be that I, for one, underestimated the appeal of a true wide angle camera?

NB: in this feature I'm using the terms 'main' and 'wide angle' where some phone manufacturers have started calling the lenses 'wide angle' and 'ultra wide angle' - I don't get the reason for the change, and am guessing they're just trying to emphasise their own zoom lens solutions in comparison. Go figure.

It's certainly true that we've largely ignored wide angle camera set-ups in our imaging comparisons here on AAWP. Partly this is because I didn't really see the appeal of the idea beyond 'novelty' and partly this is because there's no way to compare like-with-like with smartphone cameras from the scope of AAS and AAWP. So, typically, I'd put in an extra 'wide angle' example photo and perhaps add a few extra points to such a phone camera's score.

Which is a little unfair, in hindsight. As I write this feature, I'm also conducting a Twitter poll, hopefully ended as you read this and hopefully embedded properly below:

If you could have just one extra camera lens on a smartphone, would it be:

Around 60% of respondents would rather have a wide angle camera than a telephoto (or even 'macro') lens, which surprised me - but does seem to tally with industry trends. Some of the most popular mainstream budget and mid-range smartphones in 2020 have, essentially, dual cameras - you've guessed it, main and wide angle. Partly this is because of cost and practicality (telephoto tech is more expensive and needs more vertical depth in the phone, so a thicker camera island), but partly this is tying into how much fun people are having with wide angle set-ups.

And, for my part, there's the lack of impetus to compare wide angle set-ups because none of the Nokias/Lumias had such optics. But there's also the 'photo snob' factor. After all, if you want to see more of a scene then can't you just step back a couple of paces? Why distort the scene through what amounts to almost a fish eye lens? Why indeed, though the counter-argument is that it's not always possible to do so, at least not without getting run over/falling into a pond/falling off a cliff:

In the example above, from friend of the site Gavin Fabiani-Laymond, taken on the Huawei Mate 20 Pro in 2018, he's backed up against the landscape, capturing a scene that would be impossible to shoot using a standard phone camera lens. He can't step back, so the phone's wide angle lens came in very handy. (I rather like the arty lens flare in the corner, by the way, the shot was taken near 'golden hour', with the sun very low in the sky.)

So yes, you can't always step back. I was in Windsor today and snapped this fountain from the edge of its forecourt (in shade): 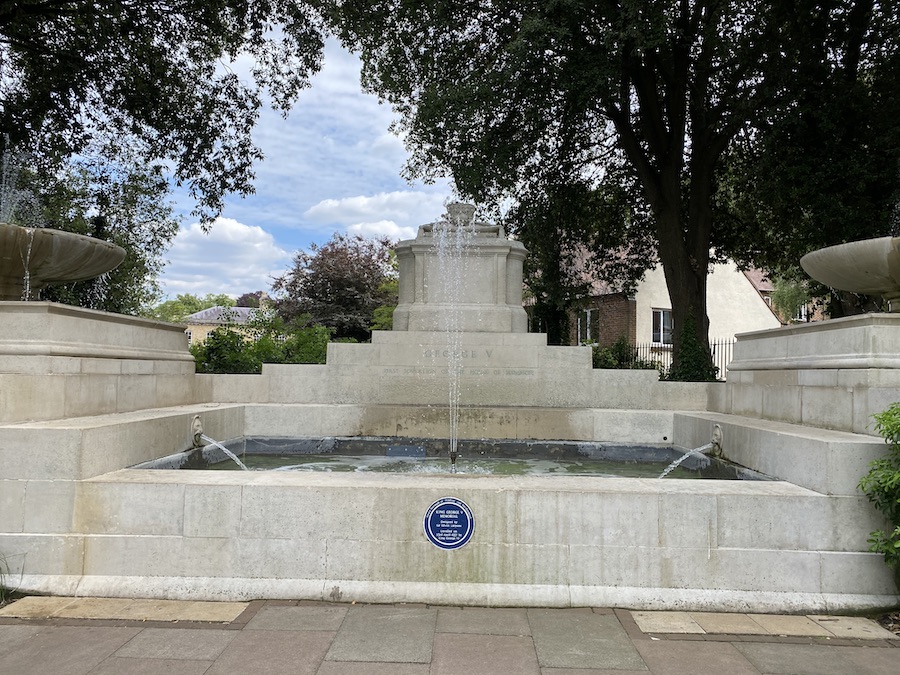 Apart from not being quite level(!), there was no way to get the whole thing in a standard shot without standing in the middle of the pavement and being mown down by (or at least in the way of) all the tourists! But... with a wide angle lens onboard my phone and also shooting in 16:9 for extra impact, there's this shot: 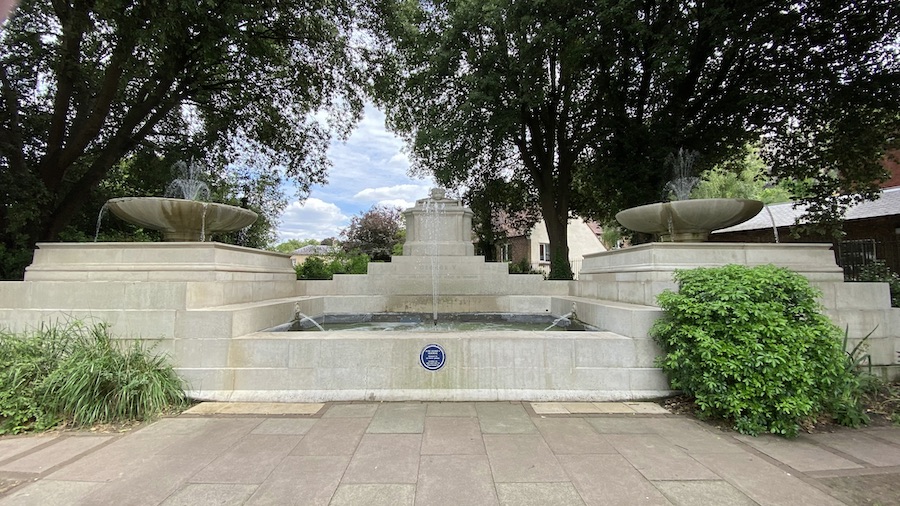 Which is a lot better and at least gets (most of) the subject in the frame. But this is just me shooting test photos, let's have another of Gavin's nice wide angle examples, this time in a church, where the optics let him get most of the interior into one shot:

Both the above wide angle examples show minimal vertical distortion, i.e. they were taken more or less head on, so are immersive and things look (nearly) 'normal'. If something is massive and needs wide angle but you're also forced to shoot it from ground level then all bets are off. Here's one of Windsor Castle's towers, taken from the road (i.e. I couldn't get further away, since I had shops and pubs behind me!): 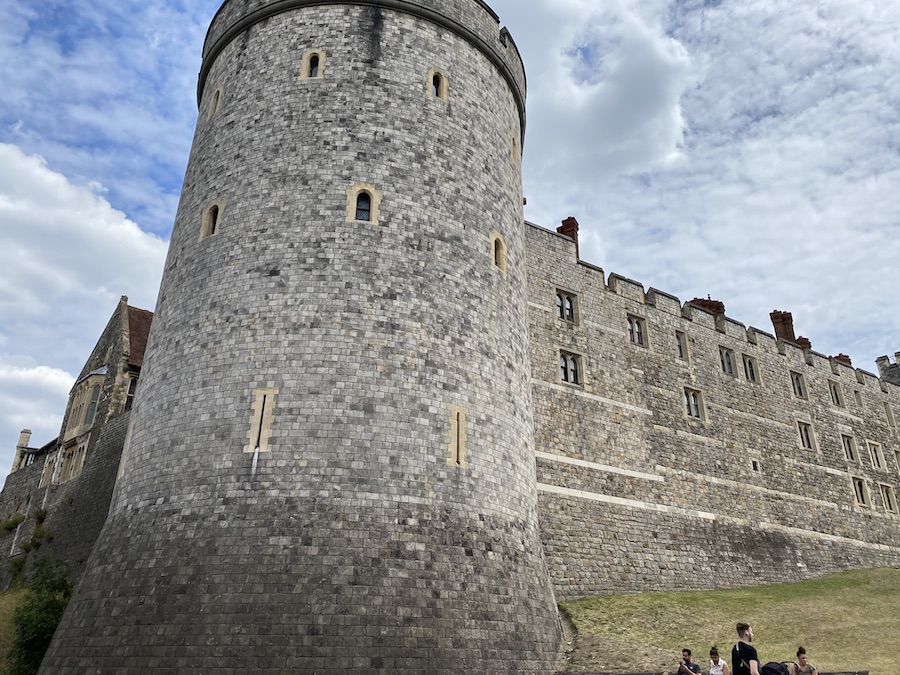 That tower is rather impressively big/tall! There's enough 'vertical distortion' here already, let's see how bad it gets with a wide angle shot: 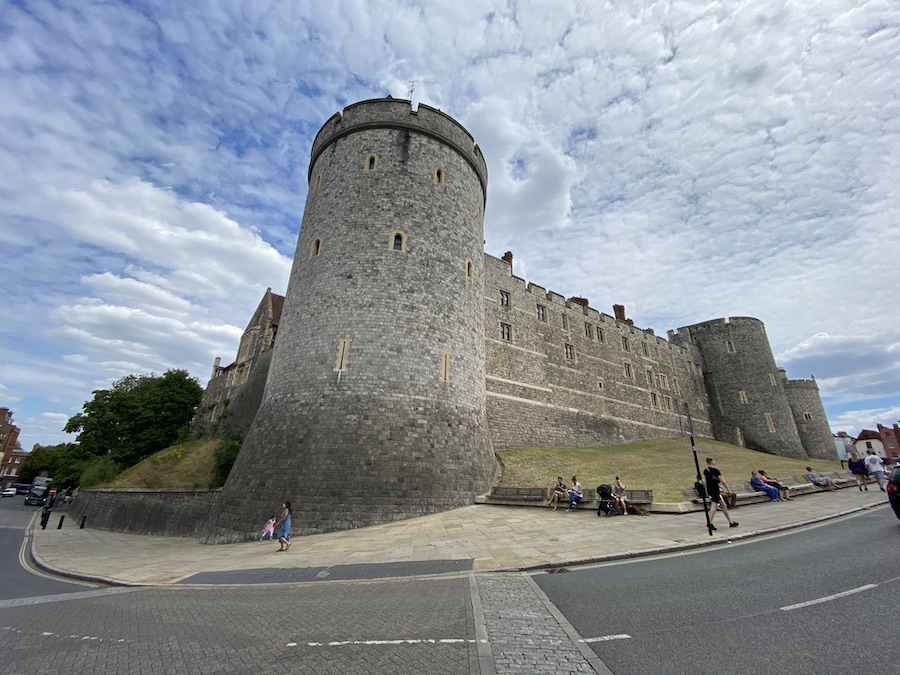 It's all a bit much, really, and this is a good example of why I've written off wide angle photos for much of my photographic life. There are times and places for 'wide angle' (as in Gavin's examples above) but often the results are too far removed from reality to be useful.

However (and, interestingly, Lumias can join in with this bit, from a single camera), what about trying the same scene as a 'panorama' shot? i.e. tracking the phone from side to side across the same field of view, but with the phone software stitching things together as it goes: 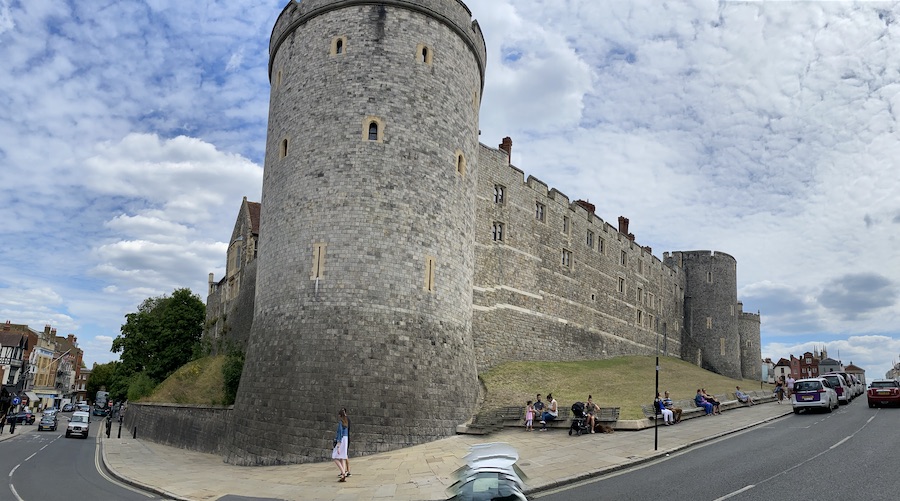 Now, it's notable that I still managed to chop off the top of the tower, but then we're still using main camera optics here and still constrained from the fact that I can't move back anymore. But I think I was nearly 'there' with the panorama approach - the verticals are a lot more pleasing and the only other real glitch is that the multi-shot stitching creates ghosts where things are moving, for example the car in the foreground.

But there's huge potential for single camera-ed phones here. With care and attention to framing and trying to time the panorama sweep to avoid moving subjects, we can get really optimal results. The thing with 'panorama' mode in a phone camera (this being AAS and AAWP, this mode has been in most phones and camera UIs over the years) is that you don't have to shoot a super-thin slice of landscape - i.e. what most people think of when you mention 'panorama' - you can instead just do a short sweep, taking in more than the standard 90° of a main camera shot, perhaps to 120° or so, to good effect.

Ultimately, both 'panorama' stitches and wide angle snaps are both useful tools to add to your armoury when confronted by a scene. Not just for big things, as with the castle above, but here are two lateral thinking examples from a visit to my local aviation museum. Firstly with loads of excellent models behind glass - the challenge is to snap them right up against the glass to avoid reflections and yet get the whole subject in(!):

Even though I missed the very top of the Rotodyne blades, I was pleased with the shot! Here's another example, first with the main lens, shooting the cockpit of a Herald airliner - you're not allowed to get into the cockpit area, so this is shot at about two metres (to the dials):

Which is an interesting shot, given all the dial details, but I also shot from the same viewpoint with a phone's wide angle camera:

Much more dramatic and you get the full sense of the seats, straps, the overhead switches, and so on. An almost perfect use case for a wide angle phone camera?

Finally, here's another of Gavin's wide angle shots, to (again) get your creative juices flowing:

Now, there were no Lumias (etc) with wide angle lens cameras, so you'll have gathered that I was using something else for my shots above - in fact the iPhone 11 Pro, which I think highly of - but in fact the photos could have been taken by any other 2020 phone with wide angle optics, I think, especially here at web resolution.

Your comments welcome anyway. Do you/would you use wide angle photos very often? Do you agree with the results of my poll at the top?