Perhaps the most relevant 'pimping' piece I've ever done, this feature looks at the legendary Nokia N8, with some components that are still cutting edge in 2013 and with an OS that's been updated steadily since its launch in 2010. So - what can be done to ensure that a Nokia N8 is running as sweetly as possible today? 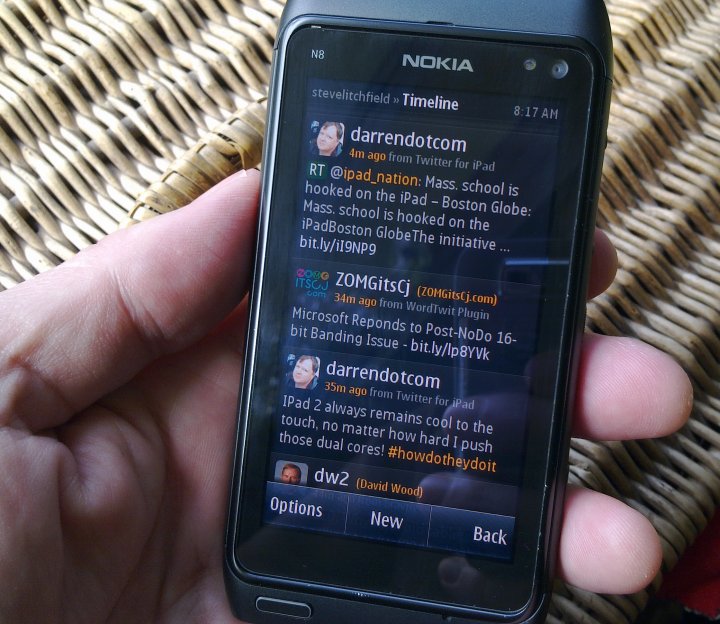 The 2010-launched Nokia N8 has quite a few special features of note, that make the device still worth considering, I contend:

I'm assuming, since this is now 2013, that you've already upgraded to Nokia Belle Refresh, but there are often small patches and updates made available through 'SW update', on the main applications menu, so get in the habit of checking it every week or two. Recently, we've had the new version of Nokia Music and the new homescreen widgets, for example: 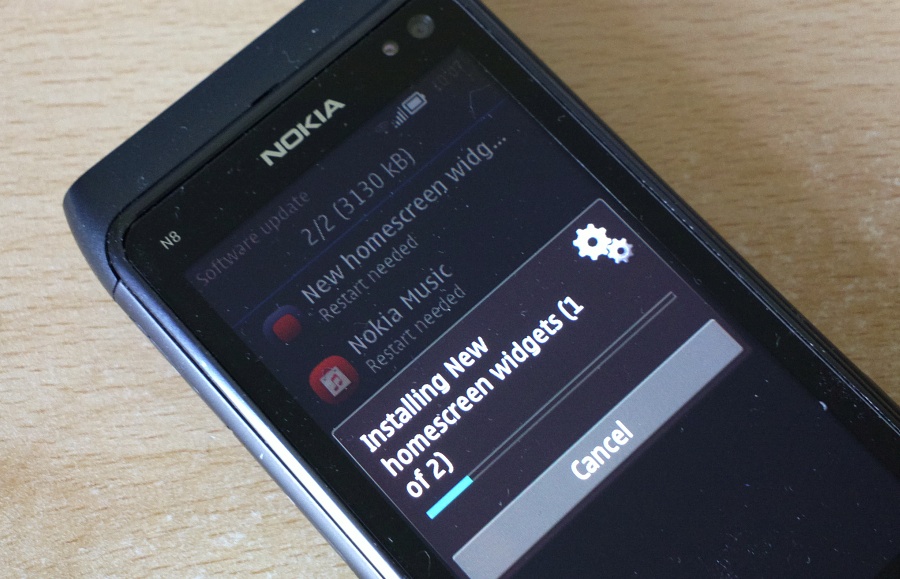 The prognosis for further updates going forwards, isn't brilliant, of course, but I wouldn't rule out some other patches appearing before the end of 2013.

The other thing that's worth exploring is the world of custom firmwares, as these can bring extra disk space, extra performance and the lifting of a number of built-in restrictions. See my adventures on the Nokia C7 (with very similar internals to the N8) and watch for my similar escapades on the N8 in due course.

The N8, C7, etc. shipped with Nokia's 'Big Clock' screensaver enabled, i.e. an always on, AMOLED-powered clock, but you can take this concept and go further - much further, by installing the free Nokia Sleeping Screen, which takes the Big Clock idea and amplifies it to include striking 'dot matrix' graphics. Every single time you look at your N8 you'll think how cool the always on 'Sleeping Screen' clock is... 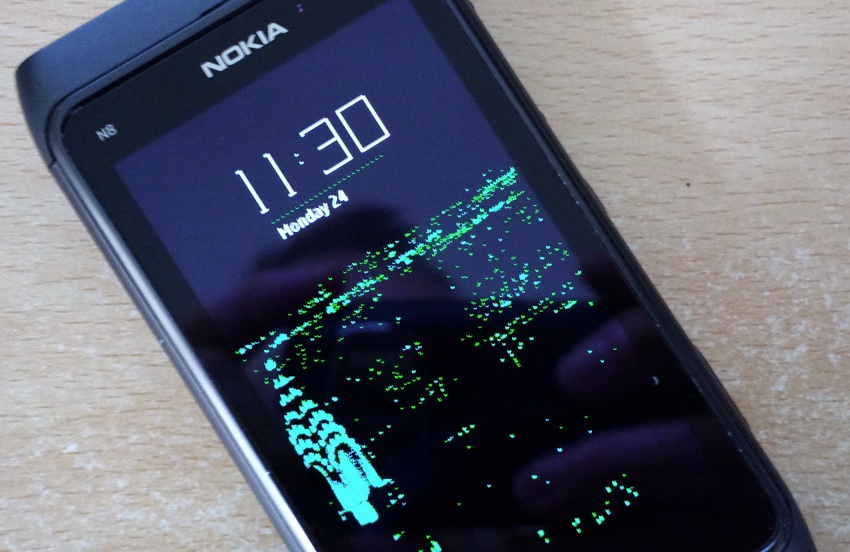 You can choose which Sleeping Screen theme you want in Settings>Themes>Screen saver>Sleeping Screen. Tap on this and wait a second or two while the graphic browser loads.

Disk C: is one of the potential bottlenecks in the N8 today (the E7, C7 and other later devices all had up to an extra 256MB of internal flash memory), you should aim to have over 50MB free at all times - in my experience this is quite achievable. Quite a bit of the preinstalled software on the N8 can be zapped, should you want a little more system disk space and a lighter app menu structure.

For example, F-Secure's 'Mobile Security' isn't needed, so that's a candidate for removal. The easiest way to remove apps is to long press them in the application menu and tap on 'Remove', but you can also see the complete list in Settings>Applications>Installed.

Next, and this sounds obvious, but it's surprisingly easy to switch your Nokia Store installation preference to install to 'C:Phone Memory', for installing a theme or always-on background utility*, and then forget to switch it back to 'E:Mass memory' afterwards.

* Because your mass memory (E:) and microSD card (F:) get locked out whenever you plug your phone into a desktop or laptop computer, anything that simply has to be always available does actually need to be installed on C: It's why most Nokia core updates always go to C: directly, without asking you.

You can get a surprising amount of space back by removing your email account(s) from the N8 and adding them back again. The problem is that Nokia Email keeps all sorts of old messages and miscellaneous files and attachments all squirrelled away in a tortuous system folder structure. And however much it tries to do so efficiently, there's an inevitable build up of 'cruft'. Luckily there's a painless way to clear all this out and reclaim, typically, between 10 and 25MB of space in one fell swoop:

Finally, empty out your Web browser cache, though of course, it'll all gradually fill up in normal use again. Go into Web and tap on the menu icon and then on 'Settings>Privacy'. Tap on the 'Clear privacy' line and then on the 'Cache' bullet point - the UI's not too obvious at this point, but the browser cache does get immediately deleted.

As mentioned in generic Belle tutorials, it pays dividends to re-introduce some of the app folder reorganisation that Belle took away. For example, you can create a 'Games' folder (as shown above) and move all your game icons into it, and/or a 'Rarely used' folder and move in all the odds and ends that you think you'll rarely launch (e.g. Big screen, About, Vlingo, Adobe Reader, My Nokia, etc., don't worry, you can pe in to start them if needed).

The N8's camera is its biggest highlight, of course, but the user interface was never exactly stunning. The various firmware updates streamlined things a bit, but I'd recommend buying a copy of Harald Meyer's CameraPro Qt instead, which brings more options, more functions and even better quality photos, all from an interface which is thumb optimised and much faster to move around. 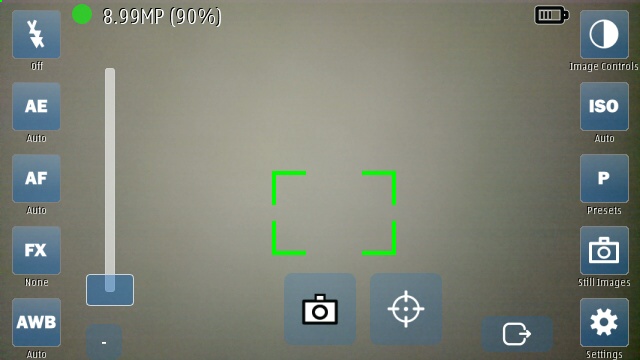 The N8's screen is essentially a big torch - that's how AMOLED works. Black pixels emit no light and consume no energy, white ones (i.e. RGB groups, if you want to get technical!) emit maximum liight and consume maximum energy - you may remember I featured this aspect of AMOLED a while ago?

The more applications you use which work with a mainly dark 'theme', the better. We're talking a factor of fifteen in terms of power drain between white-themed and black-themed displays - that's huge. You can't do much about Nokia Web (though I'm guessing you won't be using it that often, this being a 2010 Symbian device?), since web pages tend to be based on white, but you can do a lot about your general theme and choice of applications. Nokia Evolve is a great general theme but a bit boring, so you might also like my favourite, Belly Jean (download direct).

Nokia Social, although it works fairly well on the N8, has white backgrounds throughout (I've complained about this to Nokia since day one, to no effect...) and is a long term no-no on here, but there's also the free, (optionally) black-themed Tweetian for Twitter. Plus the ever-popular, (optionally) dark-themed Gravity, of course, handling Twitter, Facebook and other social networks.

Again - I can't emphasise this enough - choose your applications well and you can potentially double your N8's battery life.

Although it's tempting to suggest keeping the brightness dialled down, the N8's hardware predated Nokia's CBD screen tech, and so you may want to keep brightness set to maximum, in order to look as enticing as other modern smartphones.... I wouldn't blame you!

One of the N8's weak points is its 1200mAh fixed (i.e. sealed) battery and it's quite easy on a day of heavy camera snapping, especially if you've had email and social software running the whole time, plus satnav use to get to wherever you're taking the aforementioned photographs, to run a bit low on the battery front. The recommended solution is to top up the N8 battery when you can, whether from your car's 12V lighter or from a portable charger, many of which have been reviewed here, but with the N8, there's also my favoured emergency solution, shown below, a fully charged BL-4D battery and a Torx T4 screwdriver, rubber banded together and kept in a jacket pocket. I've only had the N8 actually die on me in the middle of an action packed day once in the last six months, but when it happened I was ready and I had the battery swapped out in around a minute. So it can be done. Phew! 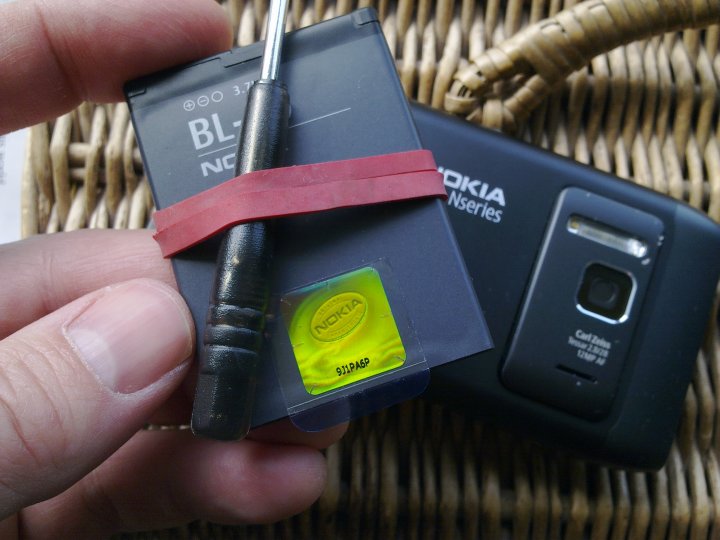 As with other smartphones, fundamental to keeping the N8's battery happy is basic Li-Ion advice, summarised as:

Of course, both also work well in favour of keeping the N8 working for you - wherever you spot a charging opportunity via microUSB (in car, on an office desk, passing the kitchen counter, wherever....), grab a top-up. You won't harm the Li-Ion battery - in fact, it'll love it. And love you back.

Of course, the N8 is somewhat slower than most would like today - that's 2010 for you.  However, I do have a number of performance tips that may help:

There's one other factor which is worth mentioning, and that's the SIM card size used by the N8 and every other phone and smartphone prior to 2011: miniSIM. With the arrival of the iPhone 4, the phone world started to move towards the much smaller microSIM standard and, while most phones can live with microSIM cards in an adapter, inserted into a miniSIM slot, the N8 is particularly vulnerable to damage because of its slot/unibody design. See here for much more on this.

I'd recommend that anyone who has moved to microSIM and now wants to move back to an N8, get their network to swap the card format and then use the 'full size' miniSIM, etc.

As pimped above, the Nokia N8 is a pretty capable modern smartphone - it won't win prizes for speed compared to the 2013 Android competition, but it'll give you a decent battery life and lots of the under-the-hood features that Symbian's so good at. Plus there's the award winning camera - who could forget that?