The Curse of Micro SIM Adapters

The humble SIM card is changing – more devices are beginning to require Micro SIM instead of the usual “Mini” size we all use. Cutting a Mini SIM down to the Micro size isn’t too difficult, but returning a one to Mini size requires the use of adapters. If you’re not careful, these can damage your phone’s delicate connectors. What follows is an account of my adventures (and misadventures) using Micro SIM adapters.

The Subscriber Identity Module (SIM) card is used in mobile phones as a memory chip which contains data required to authenticate you on to a mobile network. Early SIM cards only had 16KB to 64KB of storage, which was enough to store your authentication data, mobile data settings, plus some contact details and text messages. Higher capacities were introduced for the age of multimedia messaging too. Other SIM chips with the same connection format can have microprocessors on-board for added functionality, and there is even work afoot to add Near Field Communication (NFC) into the SIM chip.

If you take a look at a modern credit card with a smart chip you’re looking at the original SIM card format. Very early mobile phones actually took these relatively large cards. What we think of as SIM cards today are actually in the “Mini” format. When you’ve bought a new card, it may have been in a credit card sized push-out format – presumably this is done to either make production simpler or maintain backward compatibility. In the future, we may find that operators send us Micro SIMs in a similar push-out Mini SIM format. 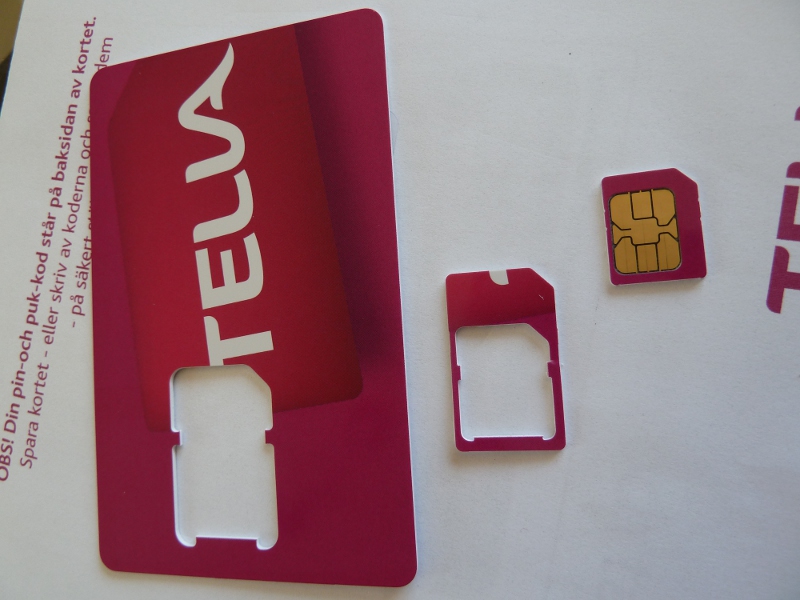 Snapping out a SIM into Mini and Micro formats.
The Micro format is also known as 3FF.
(Credit Wikipedia)

Cutting a card down to size isn’t a great challenge, and there are now plenty of cutters available on eBay to create a Micro SIM. The tricky part is if you need to use your Micro SIM in a Mini SIM device. To do this, there are various adapters on the market.

My story with Micro SIM adapters began when I was sent a Lumia 800 review unit (which is physically identical to the MeeGo Harmatten-powered Nokia N9). At the time, I was using the Nokia N8 as my primary device, but to test the Lumia 800 properly I wanted to have my main SIM in it. Most modern smartphones have a tight fitting SIM slot, rather than a pivoting holder. The N8 goes a step further – it has a push-to-eject system, because of the very confined space into which the SIM has to fit.

At the Nokia Support forums there are many threads about N8 SIM slots being damaged through the use of Micro SIM adapters [I did warn David at the time! - Ed]. Because of the cramped space, poorly fitting adapters can easily become stuck on the contact pins and cause damage when you try to remove them.

When shopping around for a Micro SIM adapter, you’ll find two types (broadly speaking). The first is what I’ll term as the Outline type, which is simply a piece of plastic in the shape of a Mini SIM with a Micro SIM shaped hole. These usually come with adhesive labels to hold the Micro SIM into place. The other kind of adapter is the Backed type [my reference]. This differs from the Outline type by having a thin plastic wall on one side of the space, with a circular hole in the centre. 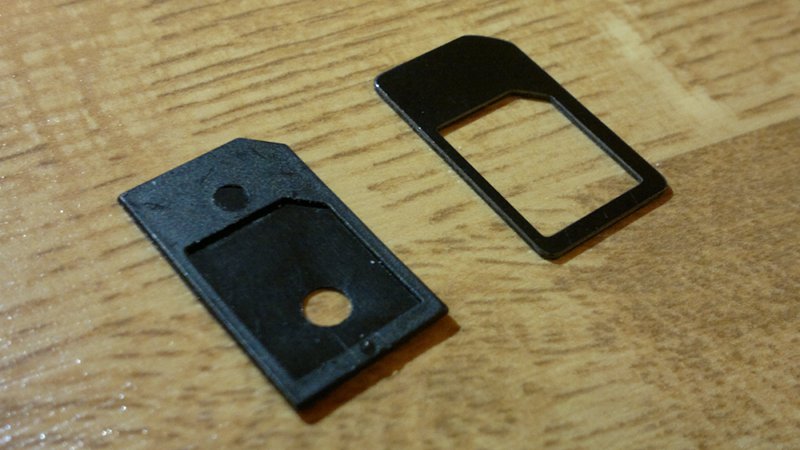 I ordered both types, and found they were a loose fit around an original Micro SIM. I decided not to try the Outline type in the N8 as I didn’t want to risk getting sticky residue from the labels inside it. Instead, I went with the Backed adapter. Sure enough, when I tried to eject, it became stuck (but did come out enough to let the Micro SIM fall out). After a struggle, I freed the adapter. I noticed that the N8’s ejection system was slightly damaged as cards were not being ejected quite a far as they were before.

Once the adapter was out, I also noticed that it was the circular hole in the back of the adapter that had caught on one of the internal PINs as there was a tear in the plastic. It was quite a demonstration of the force required to remove it! Ideally, it should not have become caught like that, but all of these Backed adapters have quite a convex wall, which makes it easy (in hindsight) to see why the hole would catch on internal mechanisms. 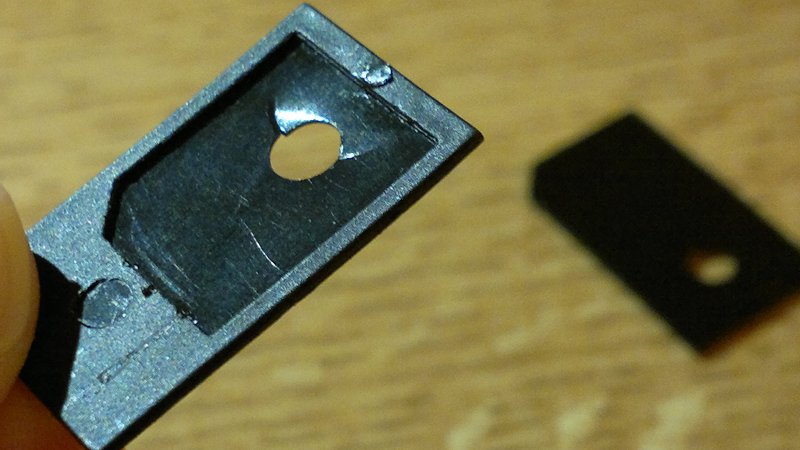 This Micro SIM adapter was torn while extracting it from an N8!

The SIM slot in the Samsung Nexus S is far less constricted than that of the N8, so I tested another Backed adapter in there, and once again it became stuck on the pins. In this case, pulling the adapter free wrinkled up some pins.  Fortunately, because of the more open design I was able to smooth the pins out with a finger nail. This was a great example of how delicate they are! 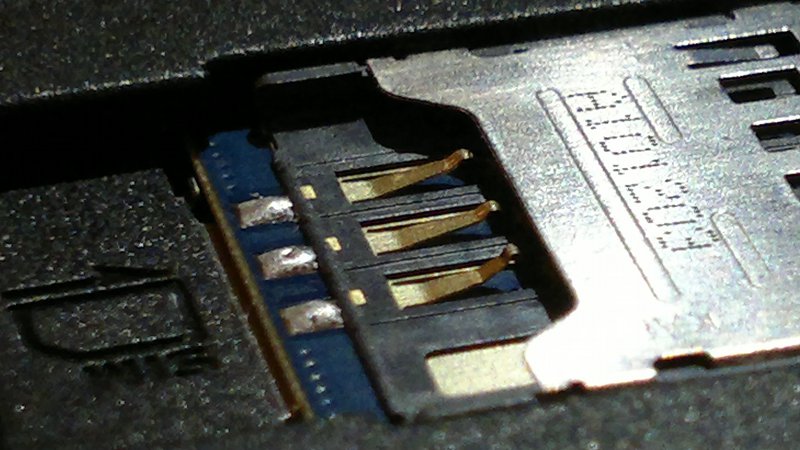 Nexus S SIM pins – can you spot the bent one?

After these misadventures, I shelved the project  and counted myself lucky that I had not caused worse damage to my smartphones. When I wanted to have my main SIM in a Windows Phone  7 phone, I opted for the HTC Radar instead.

A few months later, I stumbled across the following YouTube video, talking about an “original” German patented Micro SIM adapter. To summarise, the unique selling point of these adapters is that they are precisely constructed, and are so tightly fitting that Micro SIMs have to be snapped into place. While this could have just been a sales pitch, my experiences made the description of the adapter’s tightness ring true.

As you can see, this German adapter is very much like the Outline type, but it differs by having thin bracings across its corners. I found a supplier on Amazon UK, and despite the eye watering £7.00 + P&P price tag, I ordered one. You can now buy the same adapter for just £3.79, though (Grrr). 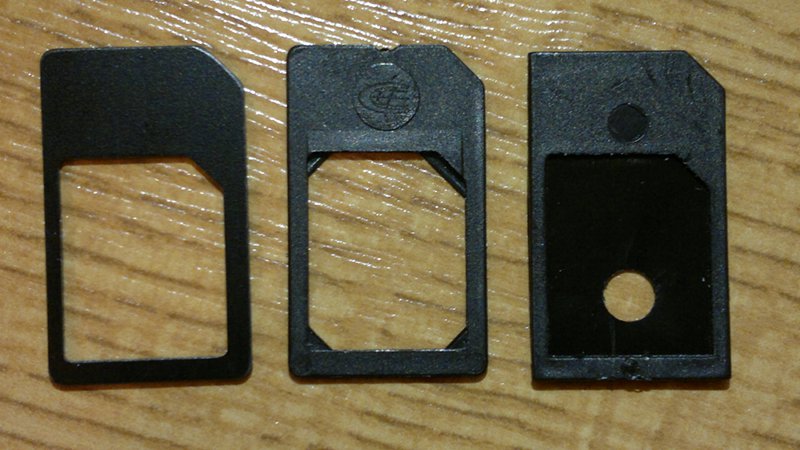 Once the adapter arrived, the Lumia’s O2 Micro SIM actually snapped firmly into place – securely enough to make me risk more tests with my smartphones. It slid in and out of the Nexus S with ease. So I was encouraged (or foolish) enough to test with the N8. The loaded adapter entered the slot with ease, and was ejected without apparent incident.

After the test, I replaced my (main) GiffGaff SIM card – to my dismay I found that the N8 would no longer recognise it! I tried a range of other SIM cards in the N8 and found that Vodafone and O2 were recognised, but Orange and T-Mobile weren’t. Upon comparing the chip designs I couldn’t find any definite pattern to what would and wouldn’t work. 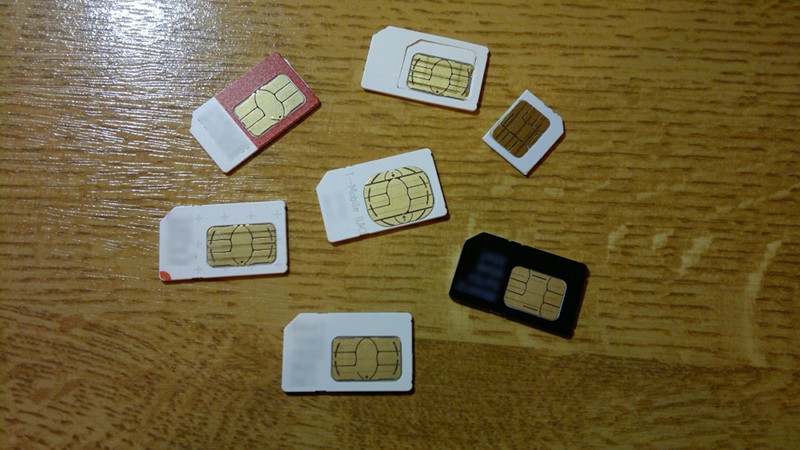 After shining an LED into the N8’s SIM slot and much squinting, I could just about see that at least two pins had been depressed (i.e. they were not standing as high as the rest). Therefore, it seemed a reasonable assumption that the slight extra depth of the Micro SIM plus adapter had pressed the pins flat – this was supported by the fact that the Lumia’s O2 Micro SIM was recognised by the N8. Seeing as there was nothing to lose at this point, I decided that I would finally cut my primary SIM card.

I’d purchased a fairly cheap cutter from eBay – the type you can find for as little as £3.00. At first, I practiced cutting an expired SIM card. The cutter worked, but left rather ragged edges that prevented the SIM from fitting into the new adapter. This was soon fixed by smoothing the edges off with a metal nail file, and the newly made Micro SIM firmly snapped into the new adapter. 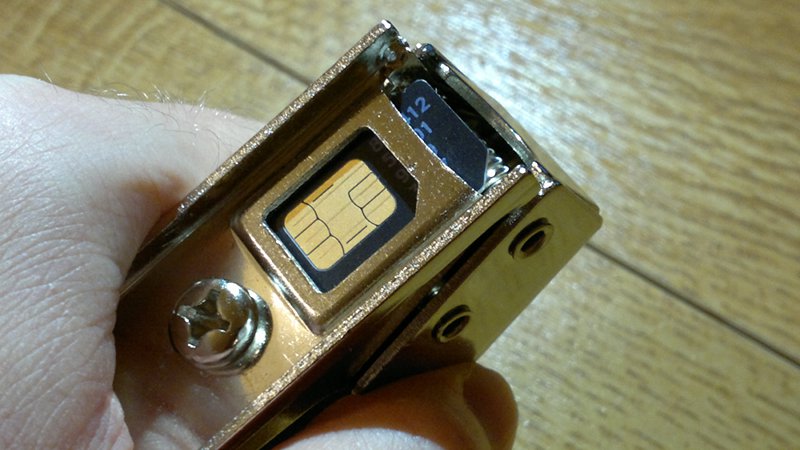 The way in which I had to position the GiffGaff SIM inside the cutter meant that I needed to cut through some of the metal contact area. The chip in my SIM was an extra-long design, with two lobe-like areas on either end. I chose to assume that these areas were redundant and made the cut. After some fine adjustments with a nail file, the GiffGaff SIM was able to snap into the adapter just like the others. What’s more, it finally worked again in the N8 – further verifying my theory about the depressed pins. It also worked properly in the Lumia 800, thus proving that the metal I’d cut through was most probably redundant. 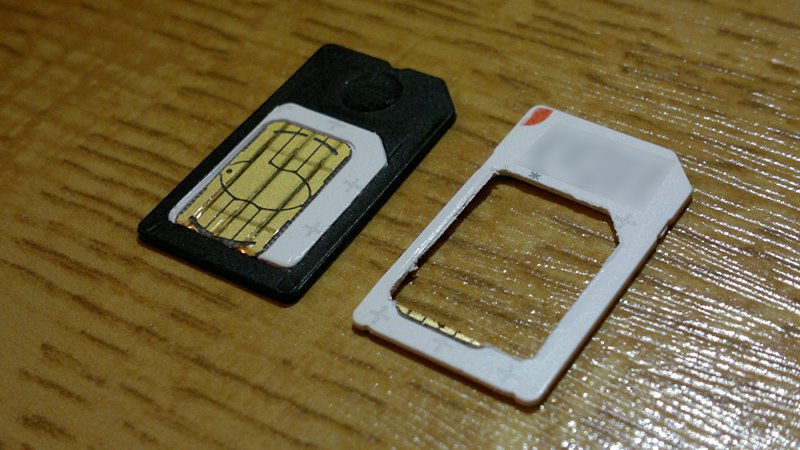 My GiffGaff SIM cut out of its card and placed in the new adapter.

Was it all necessary?

The reason many people are resorting to cutting their SIM cards is because mobile networks are not providing duplicate SIMs. There’s no technical reason why this can’t be done, it’s just easier for them not to. Furthermore, it’s illegal for you to clone a SIM, even if you’re duplicating your own SIM for personal use.

Most mobile networks are quite good about sending out replacement SIM cards. So if you ever cut yours down to Micro size and wanted to go back to Mini, you could avoid the adapter solution by just getting a replacement SIM. In my case, GiffGaff don’t do this, and instead you have to report your SIM as lost or stolen. That immediately bars your current SIM and you’ll be without service for a few days until your replacement arrives.

Furthermore, those of us concerned by the subject of this article are a rather niche group. When most people upgrade via their contract to a Micro SIM phone, their network will provide a new card. They then won’t be moving the SIM around from device to device – unlike us geeks.

Now that I have cut my SIM to the Micro size, I carry the risk of damaging future phones that I test when using my adapter. I know standards change over time, but this transition period could be made a lot easier if networks start providing us with duplicate SIMs.