How to: watch live TV on your Symbian smartphone

Now I know what you're going to ask: "What's the point? If you're at home then you can use a real TV or a desktop/laptop, and if you're mobile then you probably don't want hours of mobile TV swallowing up your cellular bandwidth!" All very true, but say you're mobile, some breaking news is happening and you're frustrated that all you can see are headlines and textual reports. Wouldn't it be nice to see what's going on by tapping into a live TV stream? With, admittedly, a UK focus, I investigate a few options. I'm sure readers from around the world can chip in with links to solutions for Symbian that work in other areas?

Getting 'live TV' on your smartphone isn't really about watching your soap operas on the bus, it's about short bursts of 'live' in the place where you are. Two particular examples for me recently were:

With that in mind, what exactly are the options on Symbian? Do bear in mind that I'm talking from a UK perspective, mind you - I can't try out native TV stations/streams from other lands for obvious reasons, just as people outside the UK shouldn't be able to get hold of UK TV streams.

This longstanding application ties into (in practice) a few dozen open TV streams from around the world, and uses a network of servers across the world to maximise throughput to its client software on all platforms. The interface is fairly slick, the buffering delays of the order of only about ten seconds when starting to play a channel, and you can even browse the channel guide during playback.

In recent years the channel selection has got more and more culturally diverse, with fewer English language channels, presumably due to licensing issues. You can still stream France 24 (in English, despite the name) and Euronews though, plus niche streams like 'NASA TV'. 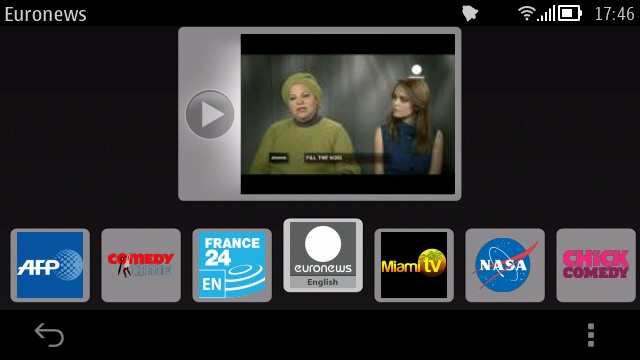 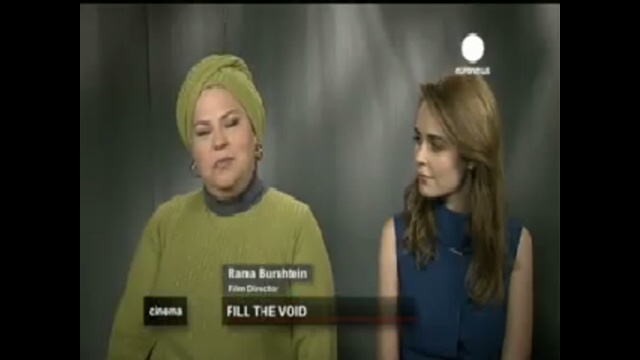 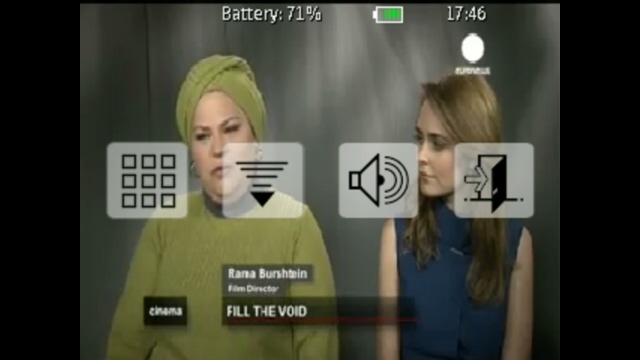 You can tap to change channels while playback continues, adjust volume, mute or return to the channel browser full-screen.

This 're-broadcast' service for terrestrial UK TV has been in trouble with the law in the past, but that seems to be a thing of the past now, thankfully. You have to register with the site and it does check which ISP or mobile network you seem to be 'coming in from', all of which helped TV Catchup achieve its current respectable status.

The main attraction here is that it's very mobile friendly, with a choice of high (wi-fi) and low (cellular) quality streams of over 50 'free to air' UK channels, served up by its mobile web site, m.tvcatchup.com. The only (very minor) snag is that the code used seems to conflict with Symbian Web - you'll have to switch over to Opera mobile in order to be able to stream video seamlessly. It does all work rather brilliantly though. 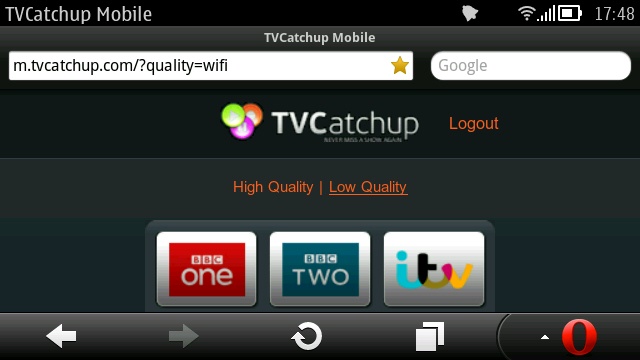 Log in (only takes a minute and is a one-time thing), pick a stream quality.... 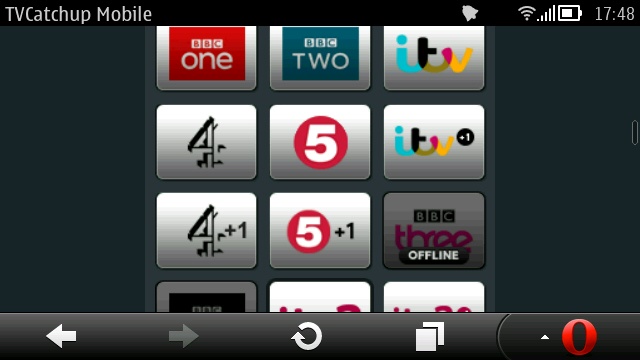 ...and then browse the channels and pick one. 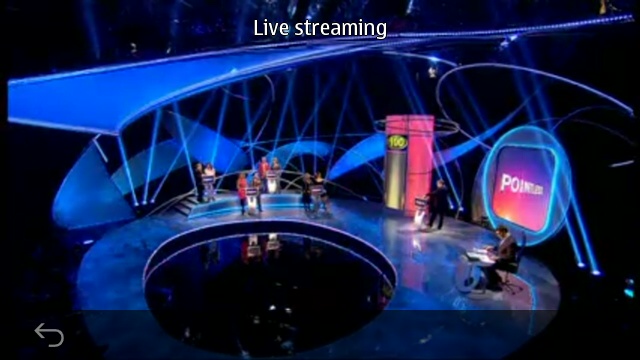 Typical playback quality over wi-fi. Probably only QVGA, upscaled, like SPB TV, but it's watchable if you're desperate to see... err... this rather dreadful game show!

I'm cheating with this one slightly, in that it's not 'live TV', but it's almost as good as, for news anyway, in that you can dive into this every day or two and get potted TV highlights from the world news, picking and choosing from the various categories. The icon you want is the little video playback one on the main toolbar, leading to all the CNN video content. 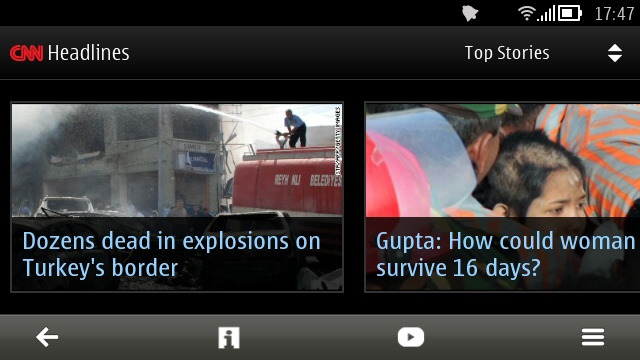 The home page, with textual stories. Tap the videos icon... 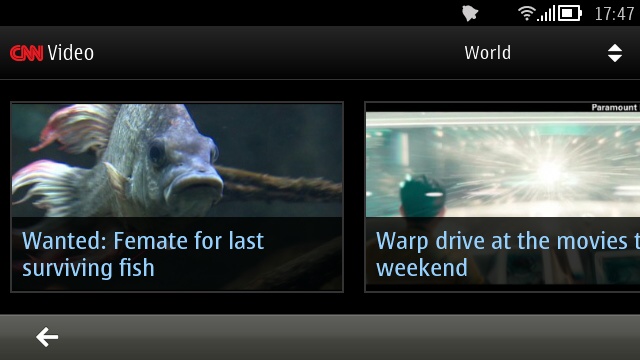 ...and get a similar carousel, this time with movie clips in the category of your choice (see the pick list, top-right). 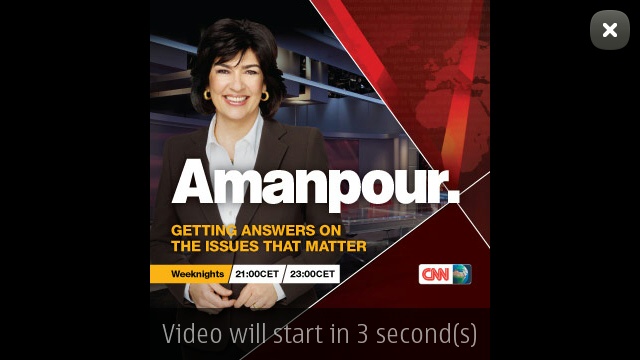 As with SPB TV, each video is accompanied by a five second static ad, in this case an offline one promoting a Sky TV cable show. 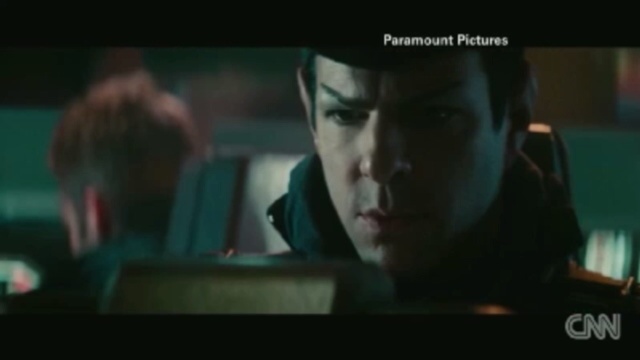 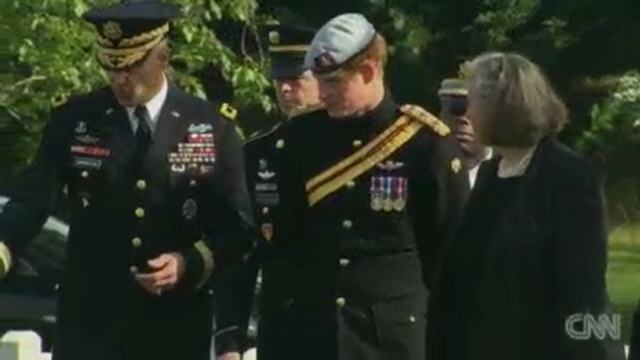 Royalty on my smartphone....!

Compared to a few years ago, coming up with only two (and a half) options for UK residents left me feeling rather short-changed. Are things better in your part of the world? Do please chip in with the comments, add links to relevant apps, etc. Thanks.

Filed: Home > Features > How to: watch live TV on your Symbian smartphone