Following previous head to heads, many people asked for a comparison between the Nokia N8 camera and that in the Lumia 920 with the PR1.1 camera fix in place. Furthermore, others wanted a direct comparison between shots from the Lumia 920 and industry-standard cameras like that in the new Samsung ATIV S (or Galaxy S III). Finally, I couldn't resist throwing a wild card into the mix with the Meego-powered Nokia N9. Four top camera-toting smartphones, which one will emerge victorious? 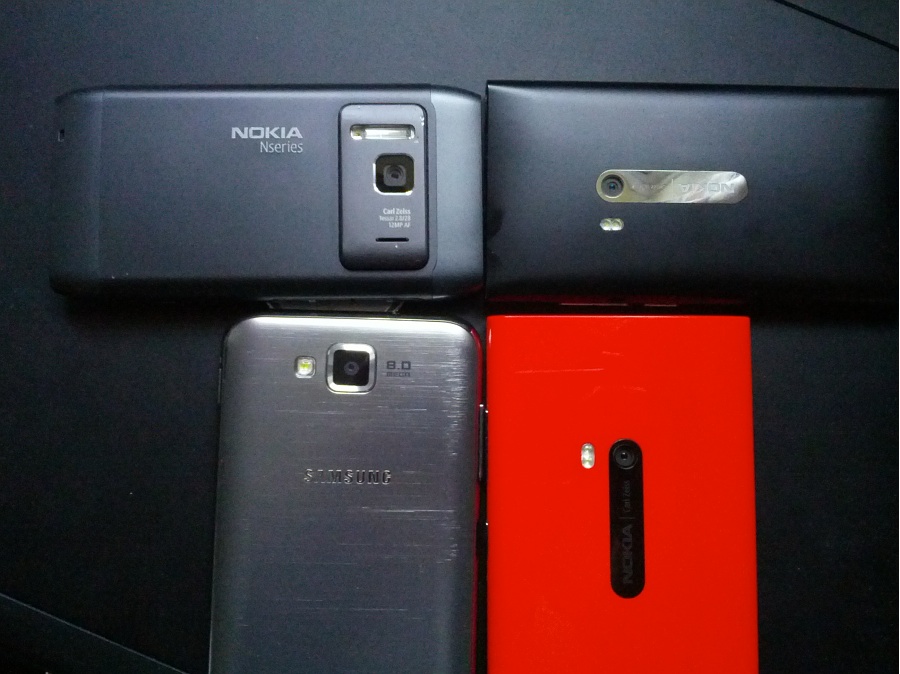 Before getting cracking, I should explain the absence of the Nokia 808 PureView from this head to head. There's simply no point - it's acknowledged even by the device's detractors that the 808 is out in front by such a margin that there's little point in even including it in tests.

Instead, many readers seem very interested still in how the 2010 Nokia N8 fares against the 920 (with PR1.1 in place) and the SGS III/Ativ S, in other words eyeing one of these devices up as a natural upgrade. Will either be able to match the camera output from the much older Symbian-powered Nokia?

The N9 (running Meego Harmattan PR1.3) was included because we haven't mentioned much about it on the All About sites in the year or so since release and because its camera is supposed to be rather good for its size.

The use of the ATIV S is partly because it's brand new and interesting and also because it has the identical camera module to the multi-million-selling Galaxy S III and similar performance to a vast swathe of other Android flagships, including the Xperia S, iPhone 5 and Galaxy Note.

As usual, I find a number of hopefully challenging use cases and subjects and take the identical shot on each of the four test phones, with all settings on 'Auto', and then look very closely at the output achieved. Note that there's no 'sunny' use case here for two reasons. Firstly, just about any phone camera can get decent results in sunshine. And secondly, this is mid winter in the UK. I haven't seen the sun for weeks, it seems! Poor lighting might actually highlight the relative performance of the phone cameras better than shooting sunny scenes, since the sensors have to strain for every last detail and scrap of light.

Just so that it's easier to keep track, I'm also going to award points out of 10 as I go along....

In this case a pub scene. The lighting was overcast and fairly indifferent. Here's the full scene, to give you an idea of context: 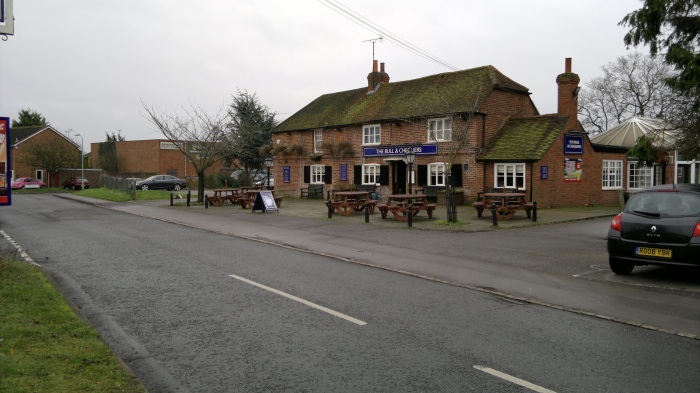 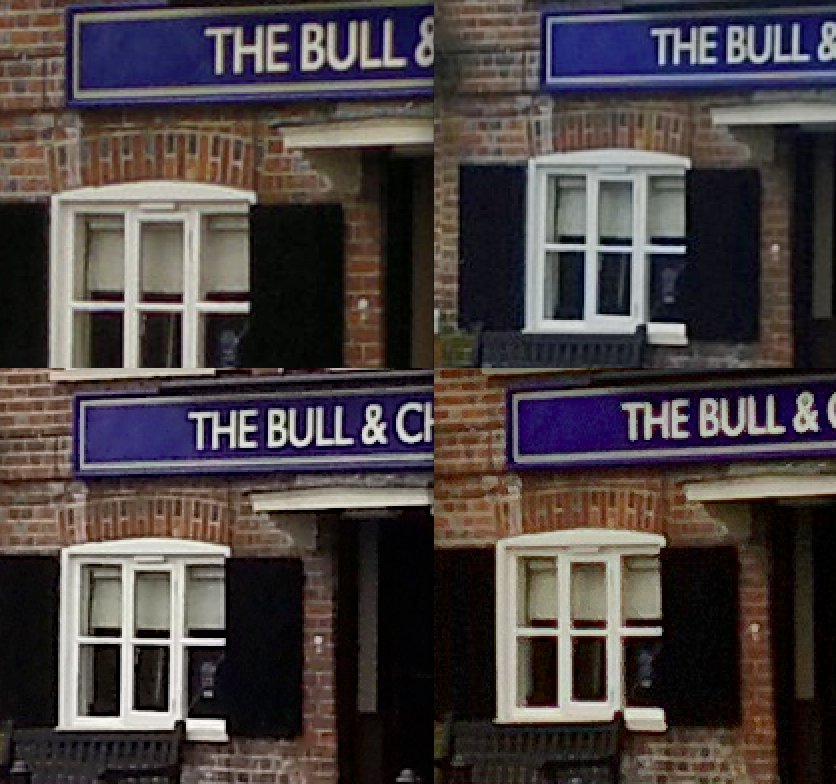 There's plenty of detail and texture here to compare. The N8 shot takes the win here, followed by a surprisingly good result from the N9 and a detailed, but too heavily-sharpened photo from the Ativ S. Finally, the Lumia 920's shot is disappointingly noisy and over-processed (look at the text on the sign).

The detailed gold clock on the church tower makes a great test subject. The tower was framed against the sky and the clock was in relative gloom, making this tricky for the phone cameras to get right. Here's the full scene, to give you an idea of context: 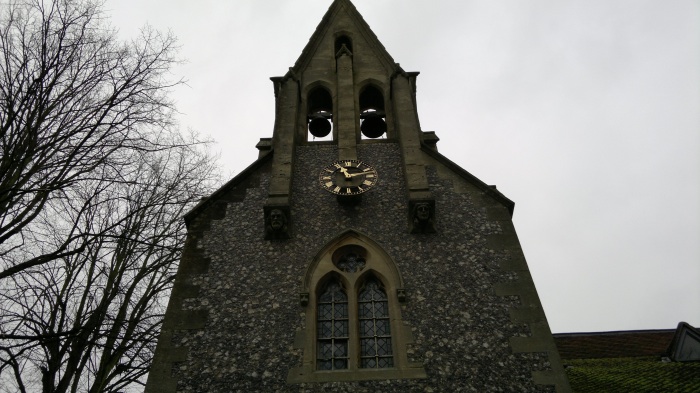 And here's the output from the four phones, cropping in on the clock. From top left, going clockwise, Nokia N8, N9, Lumia 920 and Samsung ATIV S: 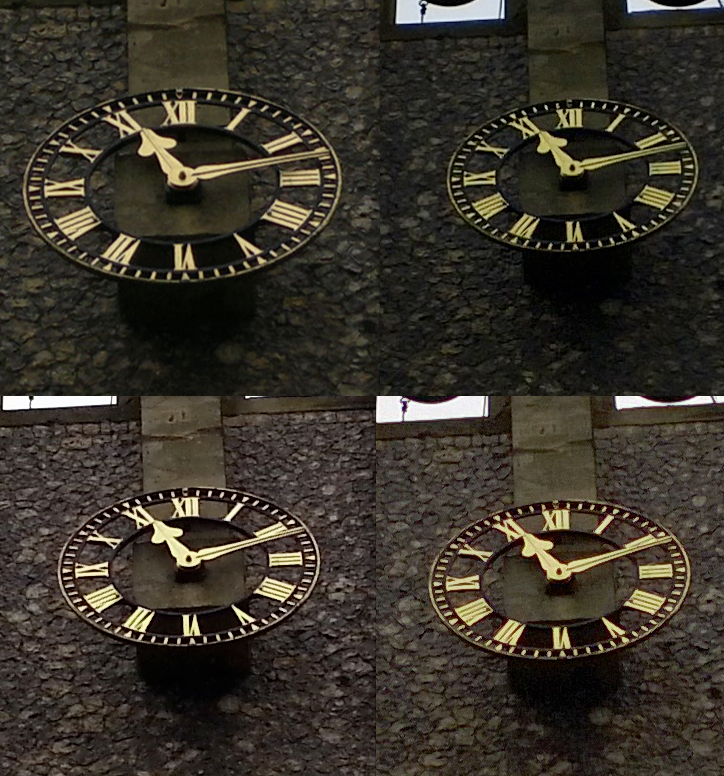 The N8, rather obviously, nails the photo - utterly. Look at that detail and the natural nature of the photo. The Lumia 920's photo isn't as detailed, but still has very natural (and accurate) colours, with the OIS making sure that the whole thing is kept free of shutter blur as usual. The Ativ S (standing for the SGS III and similar sensored-phones, again) produces a photo which looks better at first sight, but then you look again and realise that the detail is really just loads of edge-enhancement. Still, a good effort by it. The N9's photo ends up a bit dark and dingy - and disappointing.

It's a fair cop, the flowers are artificial - but, again, this is mid winter in the UK! Here's the full scene, to give you an idea of context: 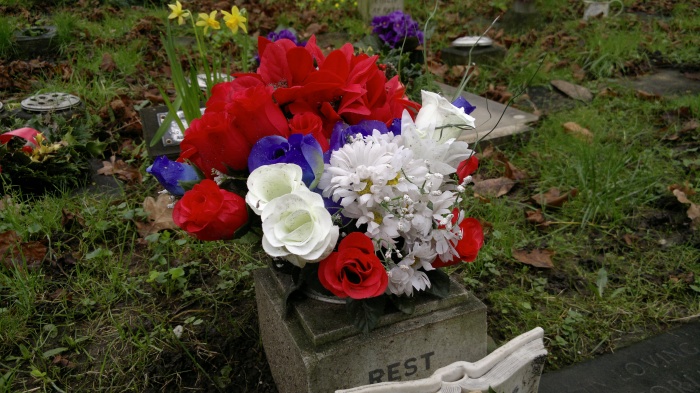 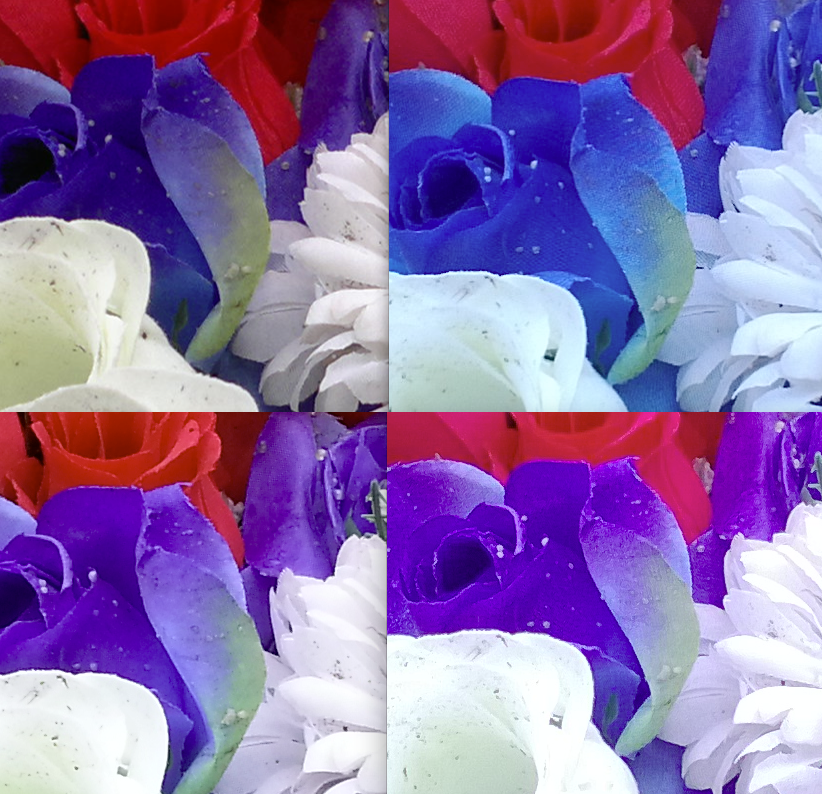 Again the N8 walks away with the honours, with almost perfect colour and detail. The N9 shot is pleasing and not a bad attempt, but the purple has become blue and there's also lots of noise. The Ativ S and Lumia 920 versions are perhaps too purple, plus the over-sharpening on the Ativ S version and the slight softening in the Lumia 920 version are evident. Tough to call a winner between the two!

The sun had long since set and the sky was very dim. Here's the full scene (as with the others here, from the N8, since it's most accurate in terms of representing reality), to give you an idea of context: 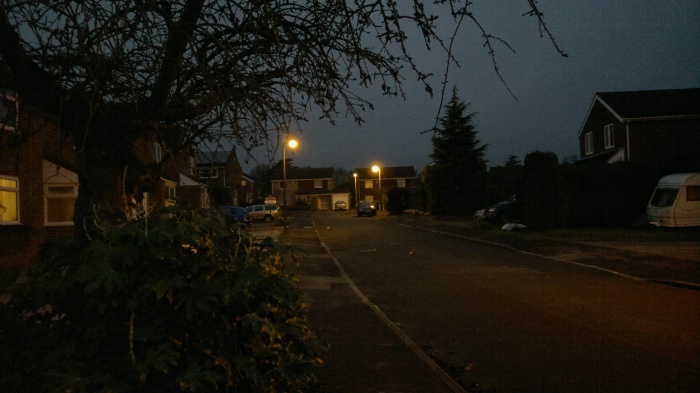 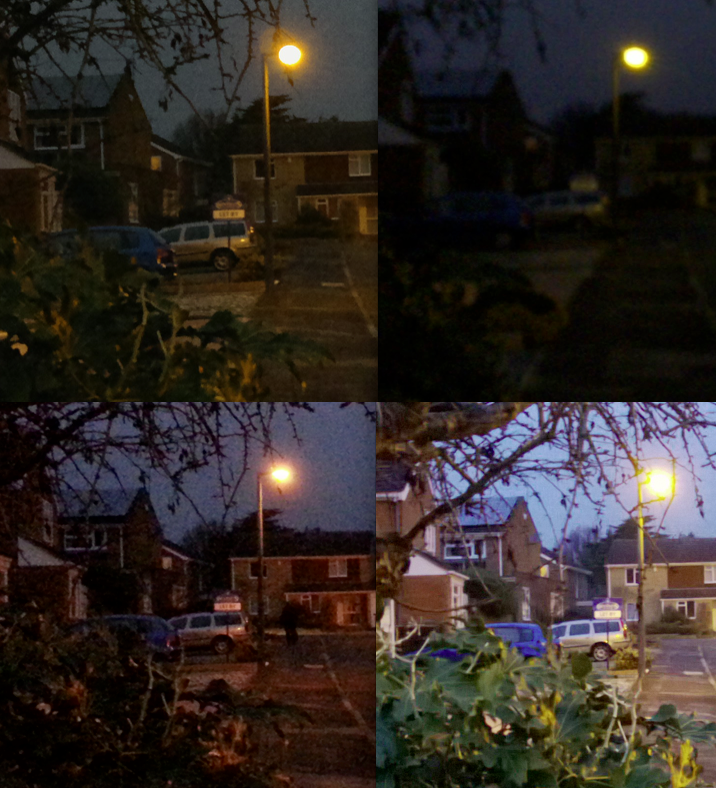 This is as tough as camera phone photography gets, at least for inanimate scenes. It also happens to be the Nokia Lumia 920's party piece - the 920 crop above looks like it was taken in daylight! A veritable feat for the 920 camera and technologically impressive, though there's a slight 'but it didn't look like that in reality' factor that nags at my mind.... The N8 gives an excellent representation of reality, though there's noticeably more noise in the photo since it can't match (1/8 second) the 920's optically stabilised longer exposure (1/3 second). The Ativ S produces results typical of your average 1/3"-BSI-sensored smartphone - very noisy, while the N9's image is just very disappointing - the N9's sensor just goes to pieces in very low light.

A boring subject, but I wanted to control the scene as much as possible. I was shooting the hand-drawn graphic at around 2 metres. Here's the full scene, to give you an idea of context: 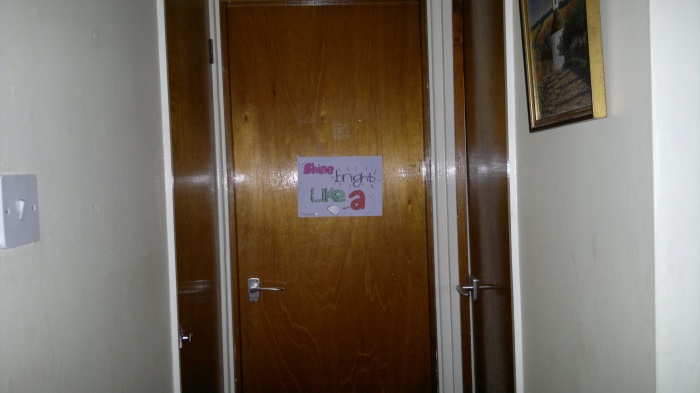 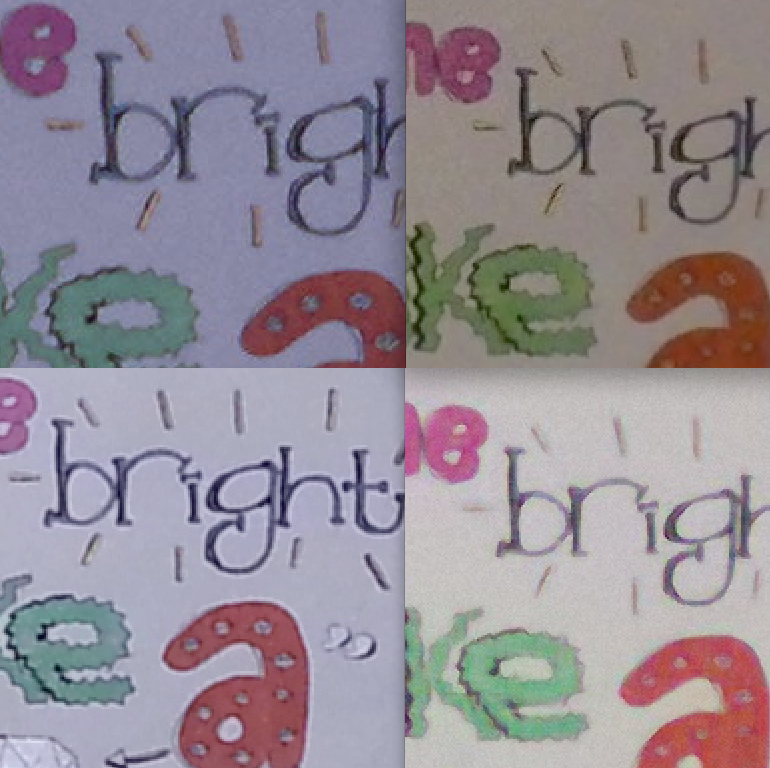 An interesting set of crops. One factor that might have had an impact was that the shiny varnish on the door somewhat reflected back to the phone cameras, perhaps altering their exposure algorithms.... The Samsung Ativ S's typical heavy edge enhancement and noise reduction processing are perfect for this sort of subject and the Ativ S's crop shows proof. The N8's shot, perhaps with the brightest flash, was most adversely affected by the flash reflection and its crop is disappointingly noisy and dark (the paper is white in reality). The N9's shot isn't bad, but again noisy, while the crop from the Lumia 920's photo shows perhaps a bit too much battling between the various image processing systems.

Just me, sitting down and chatting away with a drink, a staged 'pub' shot in which I made sure I never quite stopped moving. I won't give you the whole scene, for privacy reasons, but the shot was taken at around 1.5 metres from a 'normob' standing up. 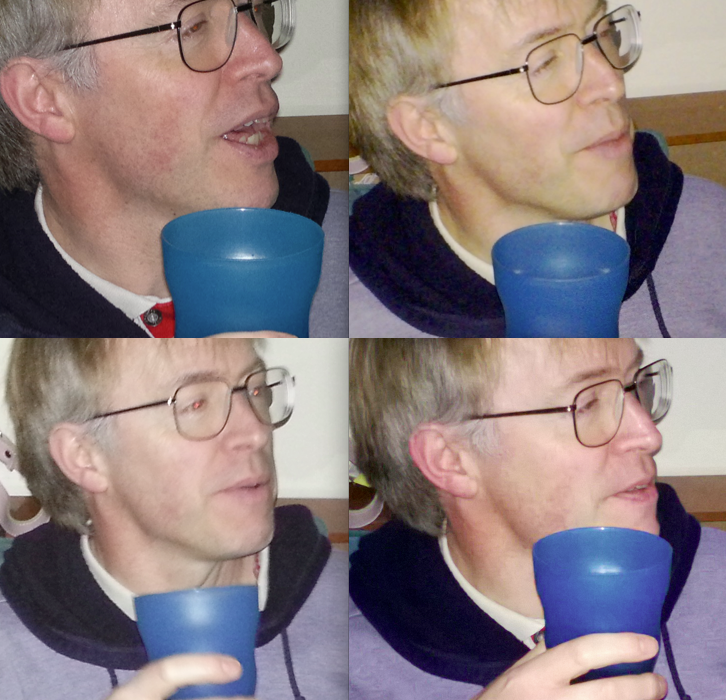 Several of the phones have had their 'party piece' explored here - this is one of the N8's comfort zones - look at the way the Xenon flash freezes motion, as usual, you can see individual hairs on my head. Amazing. And only the 808 PureView can match this among other current smartphones. The Lumia 920 does pretty well, with the OIS making sure that movement from the 'normob' taking the photo didn't affect the result (look at the crispness of the ledge behind and my hooded top), but the 1/25th second exposure did mean that my animated head wasn't quite as crisp as in the N8's version. The N9 and Ativ S's shots are blurrier and noisier, as you'd expect from the entire gamut of typical LED-flash, non-OIS smartphones across the world, and are typical of results that everybody gets down the pub or at parties when shooting with camera phones.

What does all this mean, then? Certainly that Nokia's 2010 N8, the undisputed camera phone champion until its decendant, the 808 arrived, is still significantly out in front of the entire crop of 1/3"-sensored camera phones. Even when factoring in Back Side Illumination (in the 920 and Ativ S here) and OIS (in the 920). The N8 development team had the philosophy to stick in a larger than usual sensor, a higher quality than normal lens and to completely dispense with image processing. So what you see is what you get. In most light conditions, this results in a nigh on 'perfect' result, with no algorithms to get in the way.

The Lumia 920 and Ativ S (and, by extension, the iPhone 5, Galaxy Note and SGS III, etc.) are all pretty equally matched overall, though I do get the impression that the 920's camera's image processor still has quite a bit of improvement left to come - it's new, OIS is new and Nokia's imaging team is still playing with it. Whereas the Samsung camera is mature (from the SGS II and SGS III) and is right at the limit of what it can do. So I'd expect the Lumia 920's camera performance to improve throughout 2013. it still won't get close to the N8 overall, but it'll get closer than it is right now (with PR1.1 firmware on board).

The N9 was a wild card - I threw it in out of interest and it couldn't really keep up with the standard of 2013 competition here. Or, in the N8's remarkable case, the (ahem) 2010 competition.

I've said this before, but what I'm looking for is a manufacturer (probably Nokia, but I'm open to allcomers) to bring out a phone with an N8-grade 1/1.8" sensor, a real Xenon flash, perhaps optical image stabilisation and a degree of intelligent PureView zoom as well. I'm convinced it could be done in something not much thicker than the Lumia 920 here - and it would blow everything but the monster 808 away. Roll on 2013!