One of the very first things I did when getting the Nokia 808 PureView was to check availability of spare batteries. Nothing. And I still can't find a decent source for the BV-4D online, reducing the advantage of having a 'replaceable battery' to being able to pull it out if there's a problem. But a comment to yesterday's story about the N97 mini got me thinking. What existing Nokia batteries might fit - and work - in the 808? Might I already own a number of spare batteries for it?

The critical part about battery compatibility is the form factor, of course. Nokia's use of the same three pin arrangement for all its batteries (relative to the top left corner) means that, in theory, nearly all batteries are interchangeable. However, the central plastic 'notch' does vary between cells, plus there's the major consideration that a fatter battery might not see the back cover fitting on, while a shorter battery might need padding (e.g. with cardboard or stiff foam) in order to stop it slipping down in the battery cavity!

There's also the small matter of nominal voltage, which I'll come back to later.

Having scoured through my dozen or so batteries, I came up with one perfect fit and one bodge. I'm sure there are other Nokia cells which might also work, but for what it's worth here are the two I came up with. The BL-4D, commonly used in the Nokia N97 mini and N8/E7 (both nominally sealed phones, but the N8's cell is trivial to change), and the BL-5K, commonly used in the N86, C7 and 701. Even regardless of availability for purchase, there's a fair bet that many 808 owners have either the N8 or N86 in their gadget drawer, so you already own your 808's spare battery, which is somewhat heartwarming... 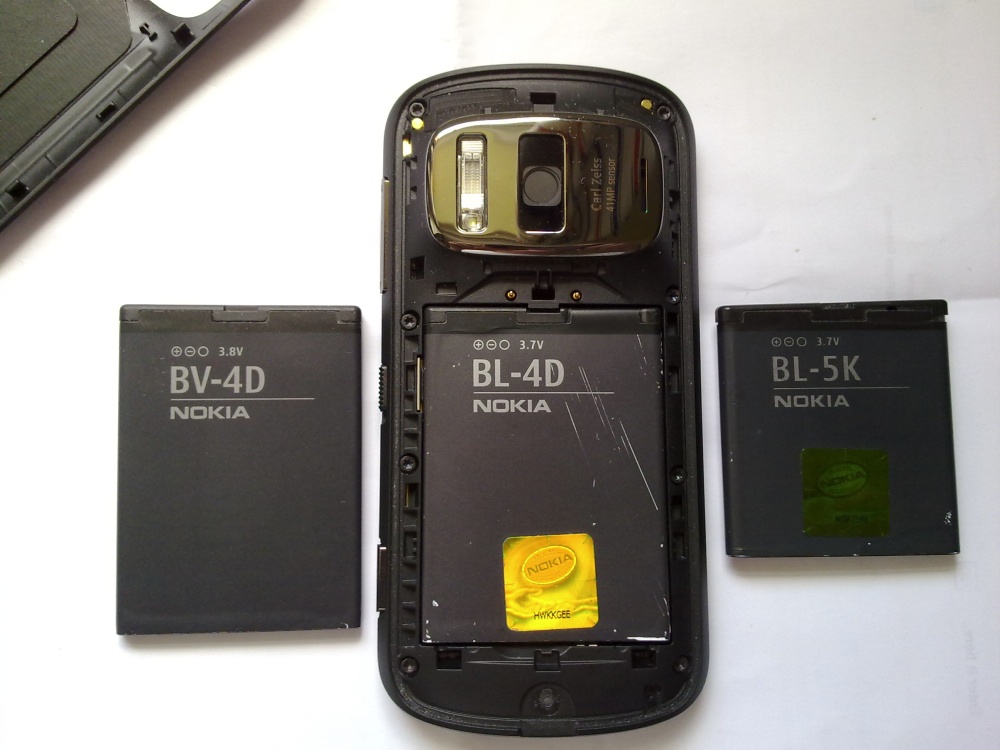 The BL-5K is a little fat and obviously too short - the 808's back cover does go on, but feels a bit strained - though nothing a little modification of the cover's rubber padding wouldn't sort out. However, the shortness is more of a problem and I couldn't really recommend the BL-5K for serious use in the 808 - you'd have to go to some lengths to pad the space beneath the battery to stop it falling away from the power pins in real world use. Maybe save this one for 'absolute last resort' territory?

Far better is the BL-4D, rated at 1200mAh, which is identical in size to the BV-4D. The main differences are in capacity and voltage. The BV-4D is rated at 1400mAh, but PhoNetInfo claims nominal capacity reported to the phone is 1320mAh, which I'm inclined to believe (and specs be damned). The BV-4D is also nominally rated at 3.8V rather than the BL-4D's 3.7V, which just means that the voltage curve during discharge is slightly different. The upshot is more power available though, as shown in the labelling below. The difference is due to improved battery technology in the last couple of years, as first discovered here. 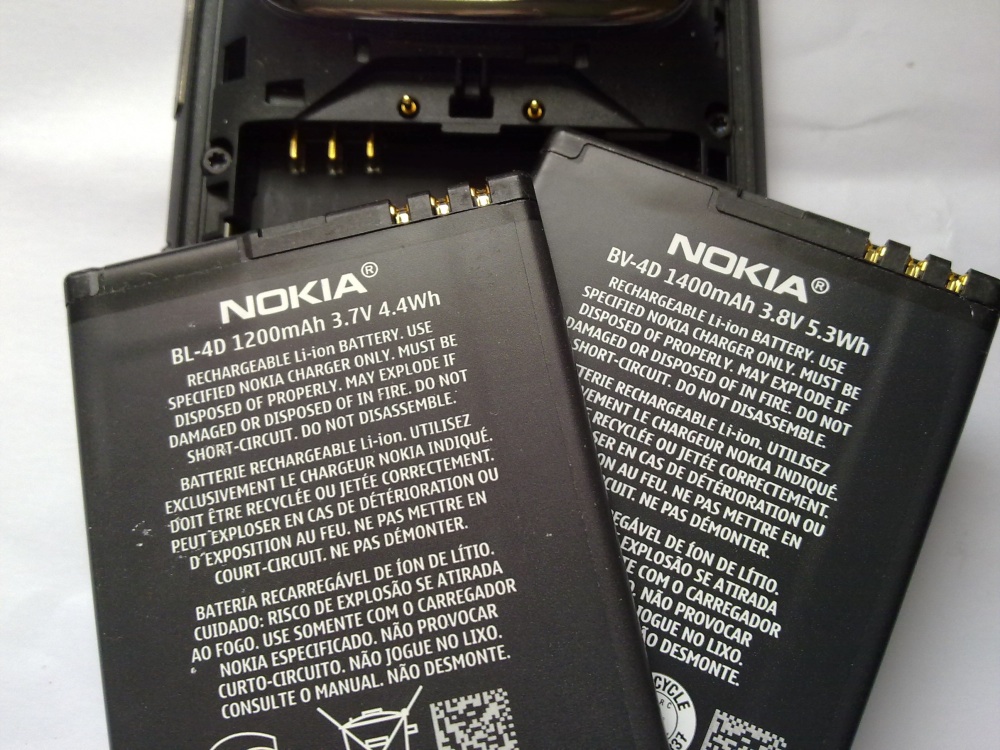 Running up the BL-4D in the Nokia 808 proved faultless - it charged fine and worked fine. Incidentally, the BV-4D also worked fine in the N97 mini, making it a good 'upgrade' for that latter phone, though why anyone would want to use the N97 mini if they already owned the 808 beats me 8-)

Although the BL-4D and BV-4D are, to most intents and purposes, interchangeable, the slightly different nominal voltage does mean that there's a small chance that you may hit a quirk at either end of the battery charging curve, such as getting a low battery warning a little too early on the older battery. But hardly a showstopper.

Here's the use case, then. You fully charge a BL-4D and keep it in your jacket pocket or briefcase for when the unthinkable happens - you're out and about with the 808 and have been hammering it, watching media, doing loads of email and then taking an unusually large amount of photos or video - and you get the 'Battery low' prompt before you're back home.

Perfect for swapping in the BL-4D to get you home and through the evening. You then charge the BL-4D right back up 'in situ' in the phone before removing it, putting it back in your jacket etc, for the next emergency, whether in a week's time or a month or two's time. And then the BV-4D is replaced and charged as normal.

Battery life on the 808 has been excellent for me and I have never run out of power during a single day so far - but a spare battery 'safety net' is always great to have anyway. And made even sweeter by the realisation that I already owned several BL-4Ds and didn't have to dip into my pocket for a BV-4D replacement that is virtually unattainable anyway!

Comments welcome if you can think of another Nokia battery which would do the same job in this phone.

PS. One corollary of all this is that the higher capacity BV-4D battery might make an excellent upgrade for a 'tired' old E7 Communicator cell, though changing the battery in the E7 is distinctly non-trvial. And you'd still have to source the BV-4D in the first place....