Of all the camera-toting smartphones that the all-conquering Nokia N8 has had to face up to, the Sony Xperia S has been the one that many have reckoned might challenge it. The full 12 megapixels, back illuminated sensor and Sony's imaging knowhow should all make the Xperia S a contender. And, in terms of speed and user experience, its camera really is a joy. But the N8 walks all over the Xperia S when it comes to the test that counts: photo quality. Sorry, Sony.

For a full review of the Xperia S, you'll have to be patient for another week and wait for Phones Show 165. Of particular note is the instant capture facility, where you press and hold the camera button with the device in standby mode and it comes alive and snaps more or less immediately. Very handy indeed for 'oh, wish I'd snapped that but it was all over too fast' moments - especially in light of the time taken to keylock toggle the N8, press and hold the camera shutter button to launch Camera, half press to focus and then press all the way to snap. On the Xperia S, you can take a photo two seconds after thinking of it - on the N8 the fastest I've got it down to is six seconds.

But it's not all about speed. The 2012 Xperia S is reckoned to have one of the best smartphone cameras in the world - there's no doubt that it captures more detail than the iPhone 4S's camera, but the latter probably wins out in terms of producing more pleasing images, I'd say (at lower resolution). However, both units produce photos which aren't as detailed as those from the 2010 Nokia N8 - the much larger sensor, the Carl Zeiss optics and the Xenon flash all add up to images which still rule the phone world in March 2012.

And it's worth remembering that the N8 itself produces images which, arguably, pale compared to its own successor, the 808 PureView, coming in a couple of months. But let's not get ahead of ourselves. I took the N8 (running Nokia Belle, not that this should matter much) and the Xperia S and tried a number of test shots in various conditions. In each case, I then took the 12 megapixel images, cropped into their centres (where the cameras had focussed and where optical distortion is minimised) and compared the results. 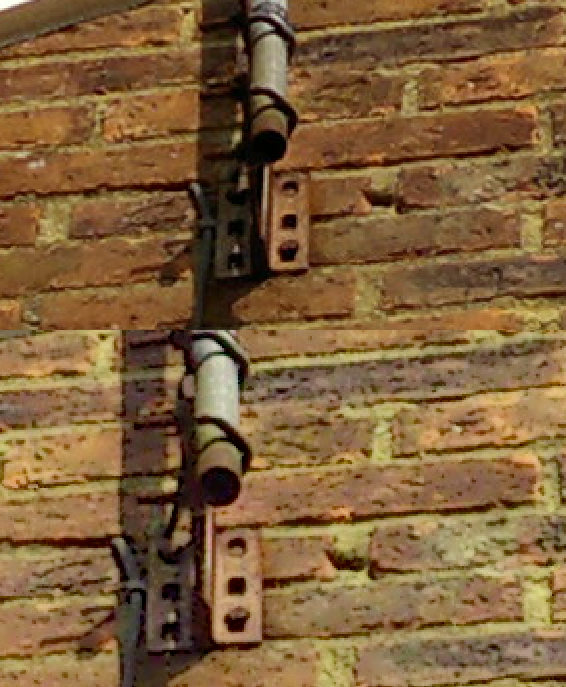 This comparison looks close at first sight, but stop to absorb the detail in what you're seeing. The N8 uses no artificial sharpening at all - every pixel is what was recorded by the sensor. While the Xperia S's camera uses a bucket load of sharpening. Look at the left hand edge of the aerial's shadow on the wall for a good example of the artefacts this introduces. Overall, zoomed out, the Xperia S image seemed close to the N8's - but not when cropped right in so that you can see what's happening at the pixel level. 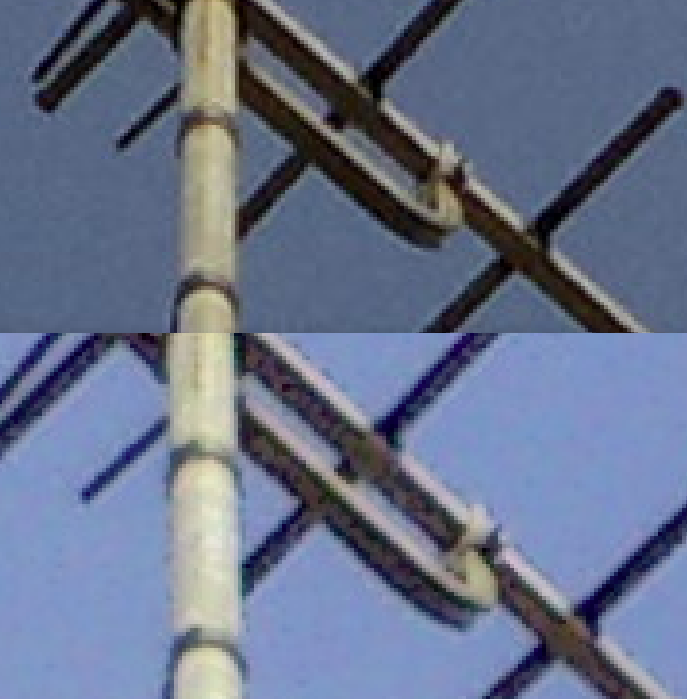 Cropped in a little further (you really can see individual pixels at this crop level!), you can see the artefacts quite horribly in the underside of the aerial struts - the jagged grey blobs are purely a figment of the sharpening algorithm's imagination. Whereas any underside detail in the N8 image was actually there.

Worthy of note are the different renderings of the same sky colour. I'd place the actual shade as between the N8's and Xperia S's versions! The N8 usually underplays colour, whereas the Xperia S tends to exagerate it slightly (as does the iPhone 4S).

Test 3: Sunlight behind me, close up of a leaf 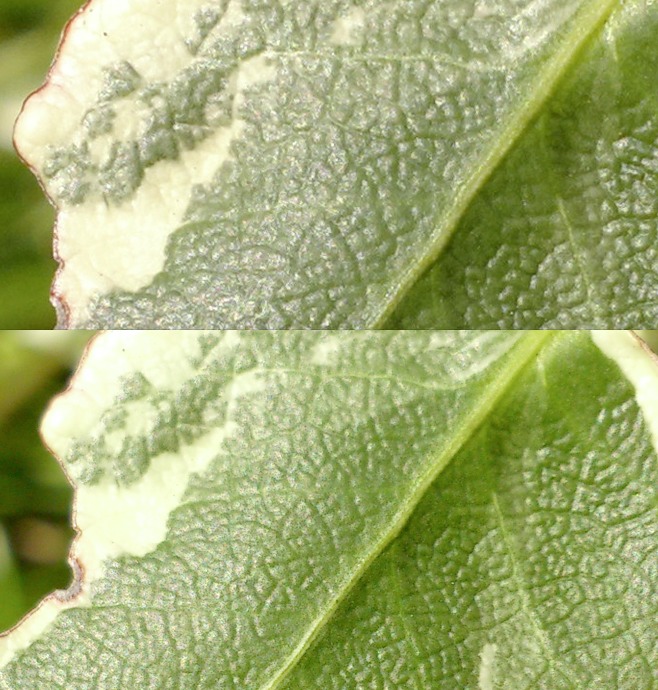 There's not much in it here, to be honest, the focussing on such close items means that it's hard to compare the images pixel by pixel. Both are pleasingly crisp and detailed. Of note is that the Xperia S can cope with everything from the horizon to the closest macro shots without intervention, whereas the N8 needs putting into 'Close-up' mode.

Before the comparison, here's the full scene, for context (with road name painted out!): 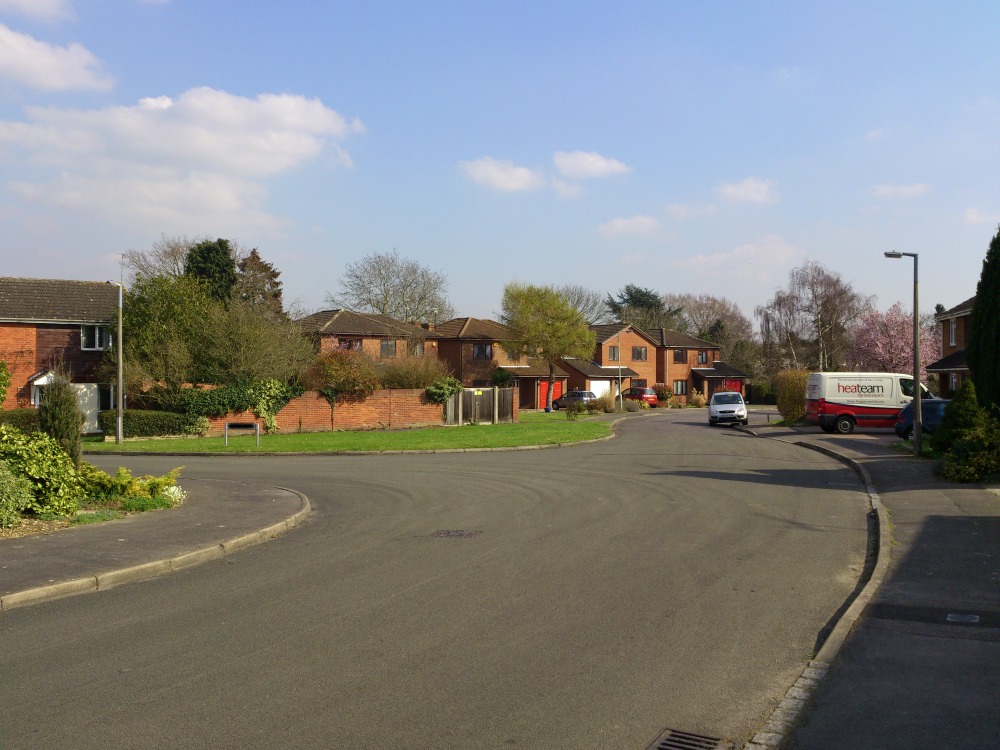 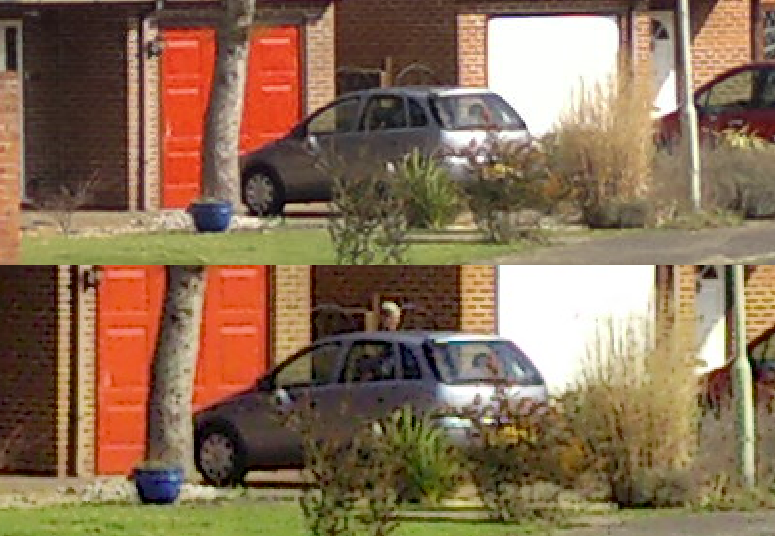 Here again the N8's raw detail and the Xperia's over-processed method are apparent. Look, in the bottom image, at the car wheel, at the left edge of the tree, and at the mess it makes of the shrubs. In fact, the difference between the two is quite astonishing considering that both are rated at the same maximum 12 megapixel resolution - explained by the N8's 'no processing needed because the pixels are large enough to provide accurate info' approach. 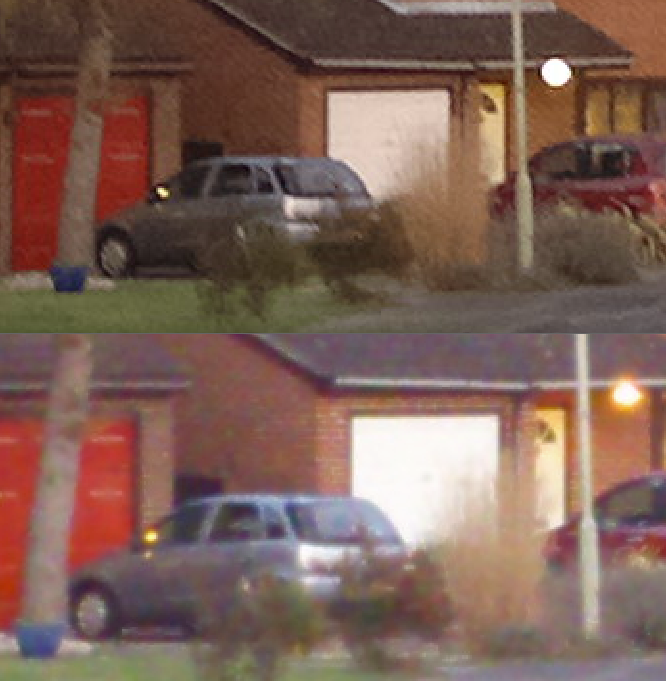 In addition to over-zealous sharpening of its images, another characteristic of the Xperia S's camera is heavy noise reduction. Although we don't know the exact details of the S's sensor, it's likely 1/3" or thereabouts, around half the size of the N8's, which means that the pixels are tiny, possibly down close to a micron each. Compare these to the 1.75 microns for each N8 sensor pixel and you can see why the latter was deemed to not need noise reduction at all.

In the test photo crop above, the noise reduction in the Xperia S image results in an awful blurring of the possible 12 megapixels of detail. Again, the comparison with the N8's results is dramatic.

Also of note is that the Xperia S took around four second to focus in this low light situation, whereas the N8 took less than a second. 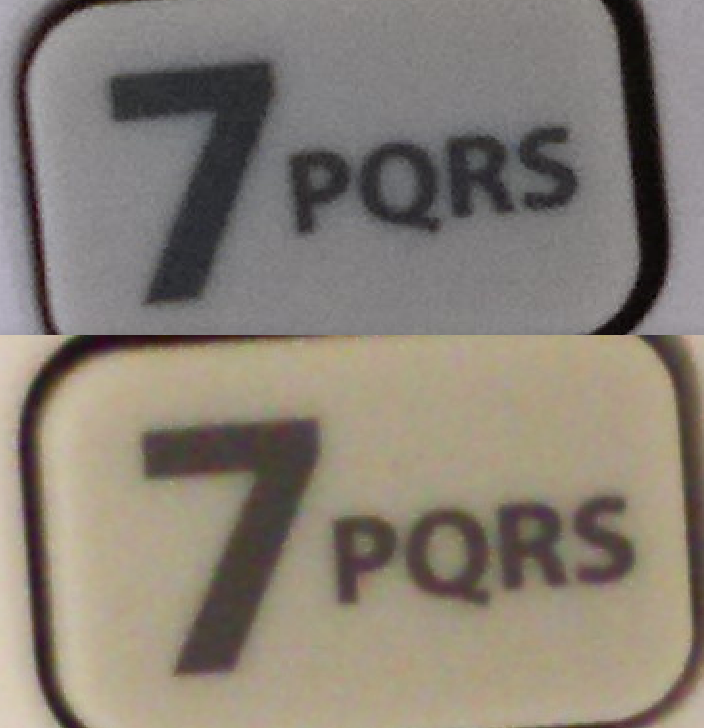 With no flash allowed (by me), I wanted to test the digital noise in a typical low light subject. A somewhat artificial test, but it does re-emphasise the degree of noise reduction being applied by the Xperia S. At first glance, the clean panelling in the bottom image attracts and then you realise that everything's a bit blurry as a result.

As with the blue sky in the image at the top, there's a difference in colouration too. And, again, I'd place the actual key colour as being between the two shades - I'm unable to give either rendition the nod in this department. 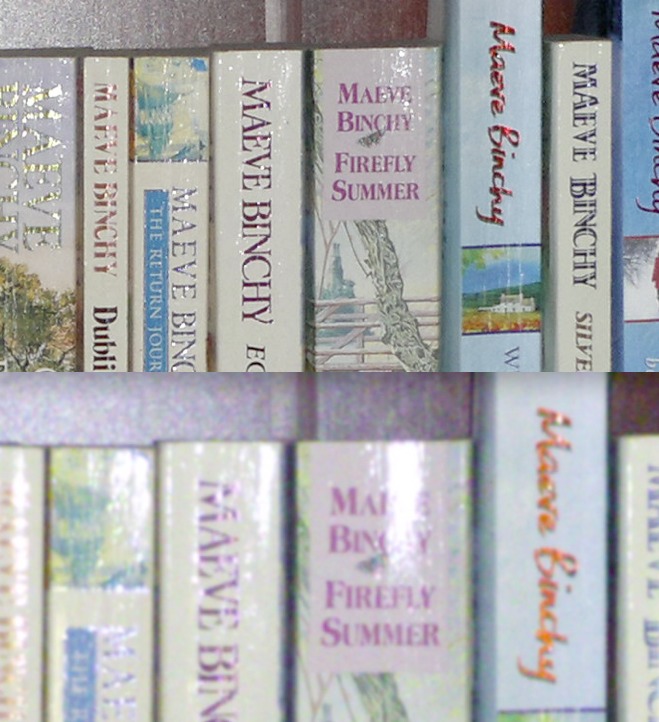 I know what you're thinking here: "Steve messed up the Xperia S shot, he didn't focus properly, or he jerked the phone while snapping". Nope, I took the shot five times and this Xperia S image (bottom) was the best of them. It goes without saying that the N8 and its Xenon flash only needed the one shot. And is five gazillion times better.

And it's worth noting that a real world social/office/party shot would have moving subjects, i.e. people, making the (100x slower) LED flash in the Xperia S dramatically worse.

Sony, HTC, Samsung, stop trying to make camera phones which can work after dark. I don't care how wide you make the aperture, I don't care how much you illuminate the sensor's backside(!). By only ever using LED flash you'll never get within a million miles of the 2007 Nokia N82, let alone the 2010 N8 or 2012 808 PureView...

This being All About Symbian, observers may suspect me of something of a 'hatchet job' on the Xperia S's camera, of being biased in the N8's favour. However, you can see the results above for yourself. Apart from the flash test at the end, each test was a one-shot happening and there was no picking the 'best/worst' to favour the Symbian phone - the N8's camera is simply much better.

As I suspected, mind you. Not because the 2012 Xperia S's camera isn't pretty good for a phone, but because the laws of physics told me before I'd even started that the much bigger camera in the 2010 N8 would produce better results. Sometimes it's OK not to have the thinnest phone, you know?!

It will also be pointed out that the dual core 1.5GHz, 720p-screened Xperia S destroys the N8 in terms of web browsing, social integration and media display, i.e. there's more to a smartphone than a good camera. Indeed. But this feature, at least, concentrating on imaging - for a comparison of other features you'll have to tune into my other review material!

PS. The Xperia S was supplied by Clove, with many thanks!