The consequences of Apple taking on the humble text message

What's set the world alight after the Apple Developer's Conference keynote yesterday? That's right, all the Android users complaining that the new features in iOS are lifted from their favourite phone. To which I say "stamp your card N95 and join the club." But the traction in tech circles so far seems to be iMessages, Apple's proprietary instant messaging system that will be part of the latest firmware.

The principle is simple - why not let iOS users talk to other iOS users - and if we use the same messaging interface, it'll feel natural. We can do this, so let's do this.

But it's the principle that has me worried. You see, the humble text message had a difficult birth - the youth of today might not remember the pains of choosing your mobile phone network not because of the tariff, or the handset (at least in the UK, the choice was a Motorola that looked like a doorstop or one of many variants of the Nokia 2140) , but because you needed to be on the network which had the majority of your friends. The call rates would be significantly lower, and because text messaging did not work between competing networks, you were in a great big silo, but you were (kinda) happy.

And the network was happy too. Once you were in there, you weren't going to join another one without disowning your friends. It was the business definition of a lock-in.

Now, of course, we don't have any similar issues, text messaging is not only cross network, but cross continent. I know that I can pick up an AT&T Sim card in the US and pop it in a WebOS device, confident that a text sent will arrive on a Symbian-based handset on Vodafone UK roaming on T-Mobile in Moscow. SMS is as close to universal as possible. It just works, and is taken for granted.

Yes, SMS is a revenue stream for the mobile networks, and when you look at the cost compared to bandwidth, it does make a lot of money. But then if this stream disappears, are you all happy to see £5 a month (or more) added to your bill, because that revenue would need to be found in other areas? And sometimes SMS is far cheaper. When I travel to the US, said AT&T SIM card gives me unlimited texts (and US calls) for $2 a day. Most of my Twitter stream flows through the SMS gateway because of that - I'd hate to imagine how much bandwidth would be used via the browser for the same always on, push functionality. A lot more than the 100MB for $20 - which is equivalent to 10 days of texting. 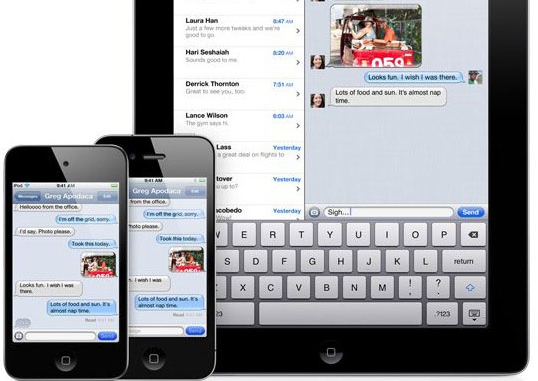 So it's disappointing to see so many people jump on Apple's messaging solution as a way to "stick it to the [network] man" by handing over the keys to not only your current smartphone, but every smartphone in the future because all your friends are there. Sure, I can see the appeal for Apple, but for the wider mobile ecosystem this is a step that rings so many alarm bells. It's going to be eased in (same user interface as messaging, nobody will see the difference) but snake oil is still snake oil, no matter how you package it.

Are we going to see a "me too" reaction from Android? Will Google deploy a variant of Google Talk that's just for Android devices that uses your 3G or Wi-Fi connection to send short messages? And isn't all this just big companies trying to keep Twitter from strutting around like the master of Silicon Valley?

Follow this insane vision through to its conclusion and we end up at a point where instant messaging on the desktop was around 7 years ago, then people had to run ICQ, Skype, AOL Messenger, Yahoo IM, MS Messenger and a Jabber client just to make sure people could reach them. That has given way, over the last few years, to a more manageable number, but do we really want to repeat that trick in the mobile space?

SMS works. It's cross platform, it gives the networks a revenue stream they can count on (and they really do need to have something that earns them money, rather than supplying everything at cost), and it's understandable by multiple generations of users. The last thing we need is a breakaway format that will kill one of the few "100% anytime anywhere" solutions. iMessages is, for me, one land grab too many from Apple - one that threatens every mobile phone user out there.

Filed: Home > Features > The consequences of Apple taking on the humble text message