OK, I promise this will be my last piece on EDoF (Extended Depth of Field). Following on from my treatise on why Nokia has gone with EDoF for most phones in 2011, I had the idea of giving the technology an ultimate 'real world' challenge. I took an average standalone camera owner, armed in this case with a Olympus FE-5035 (14 megapixels, 5x optical zoom, cost just under £100) and shot some typical 'normob' scenes with him. Me on the EDoF-equipped E7, he with his dedicated camera (with which he was very familiar). Could Nokia's EDoF hardware get remotely close, in terms of results, to the Olympus? 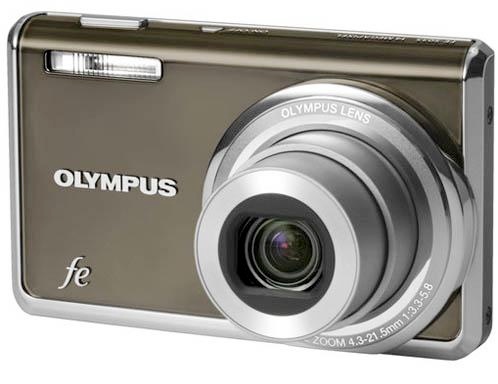 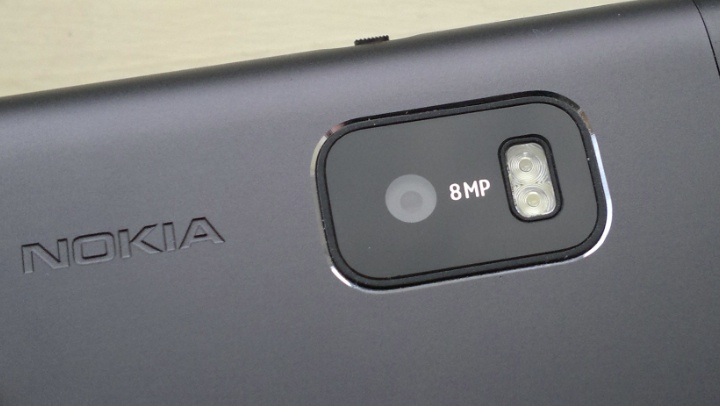 An impossible challenge, you might think. I should mention a caveat: the results were to be judged on a computer display rather than on a poster-sized print or other oversized output method - so raw resolution wasn't a consideration. We were looking more at handling of focus, of light and dark, and so on.

The test photos were taken in bright, but overcast conditions. Sunshine would have been nice, but the UK weather rarely plays ball!

Test 1: Close-up of a family member or friend

The most common photo use case for the average user. Usually a partner or offspring or pet - but you're going to have to do with my ugly visage instead. This was taken on the Olympus (and on the E7) by my willing helper at around 70cm. It's a very, very typical shot to want to take and about as close as you'd get shooting another human being:

(For each test shot, I'll put up a small version of the Olympus image first, so that you can see the context of some of my crops) 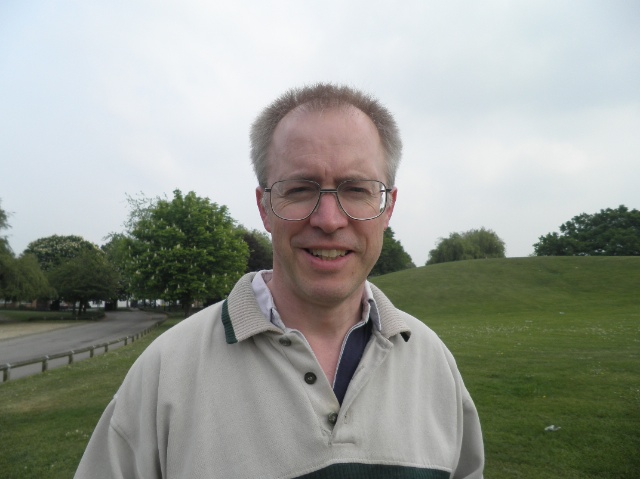 So, taking the identical shot on the E7, I popped the resulting JPGs side by side and cropped in so that you can see typical detail at monitor-esque resolution: 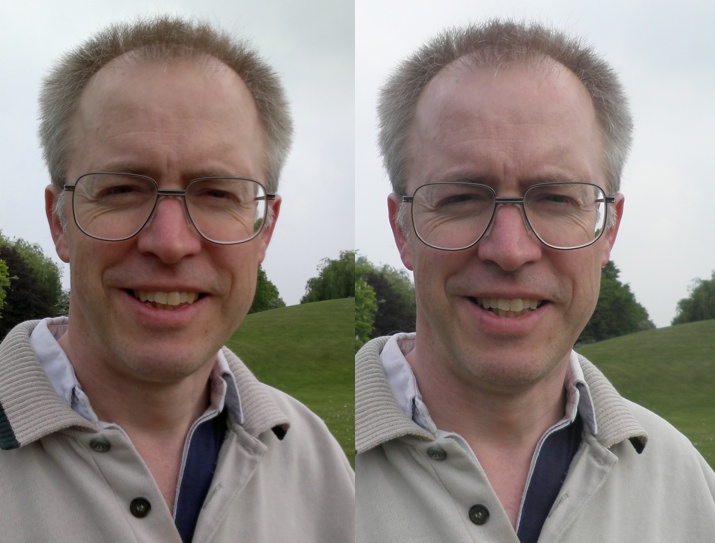 Which do you prefer? It's a tough call. The E7's image has better colours and contrast and looks more 'real', while the Olympus's image has more absolute detail (should you wish to crop further in) but ultimately looks rather unsatisfying, even 'washed out'. Result - a surprising win for the EDoF camera in the E7.

Nothing fancy, just a static scene that you want to record for posterity. Could be a holiday or just a nice sunset or park greenery, as here.

Here's the whole photo, as seen from the Olympus: 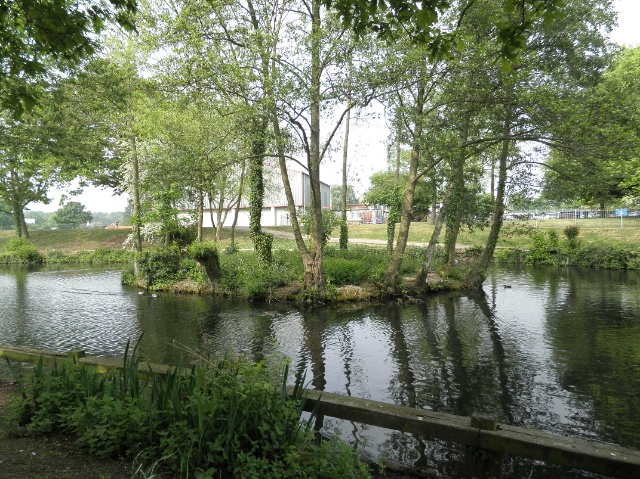 Again, let's crop in a little and put the EDoF and standalone photos side by side - in this case one above the other, seeing as the island is long/flat in the photo: 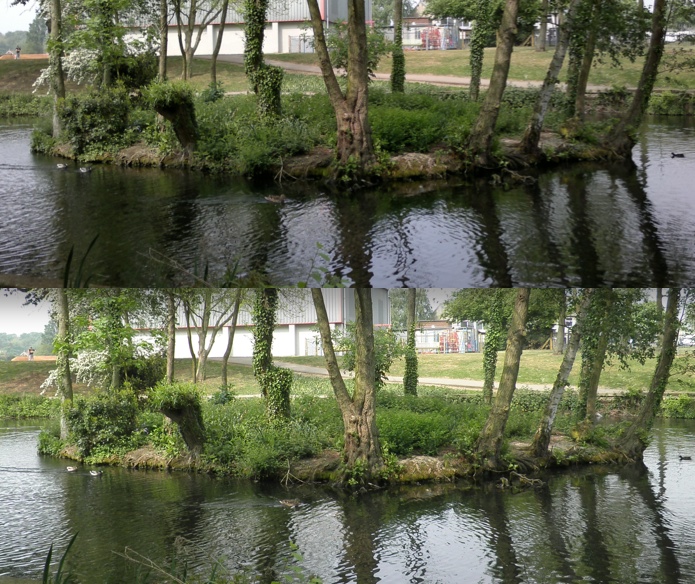 This one's too close to call at this display size, even cropped in slightly. Both photos are quite good enough, though the Olympus's version is again a little washed out - look at the white detail in the background. What's needed here, to settle on a winner, is to crop further down, in this case on the tree at the centre of the photo: 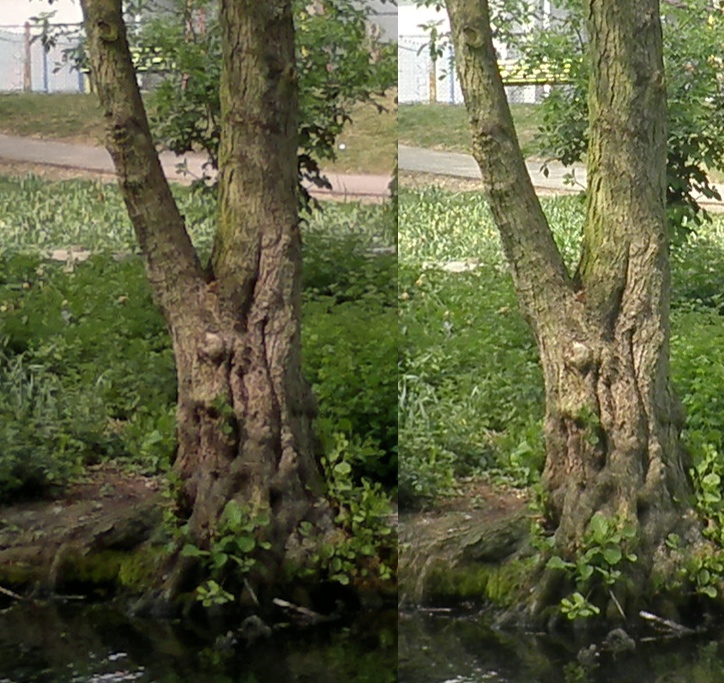 As you might expect, the 14 megapixel image shows its mettle here and you can see a real difference in terms of visual detail. And, as usual with Nokia cameras (N8 excepted), there's an unhealthy amount of noise reduction going on in the greenest areas (you may remember that the classic N82 and N95 cameras were horrible when taking photos of grass and greenery?).

As a result, the Olympus camera takes this one, but it's something of a testament to the E7 and EDoF that we had to zoom in to such an extreme level in order to be able to see that the dedicated camera image was better.

Another very common subject. Not an extreme macro, obviously, we all know that the EDoF lens would make a mess out of a sub 12" shot, but this cluster of flowers was shot at only a metre or so, enough to get a decent spread of colour. Again, here's the Olympus's shot/framing: 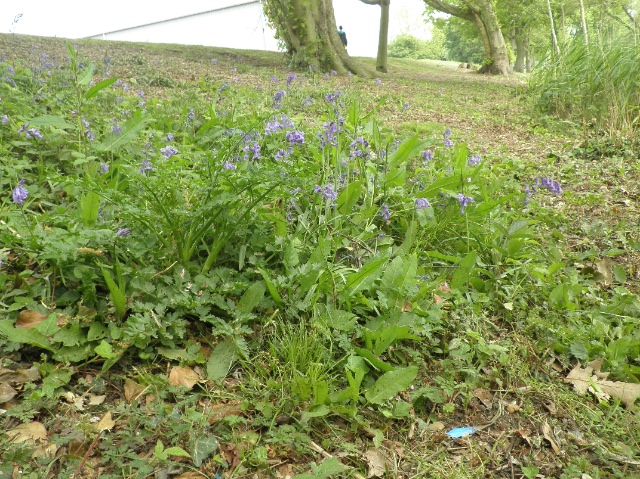 From which I've cropped the central section out from each image, putting them side by side again: 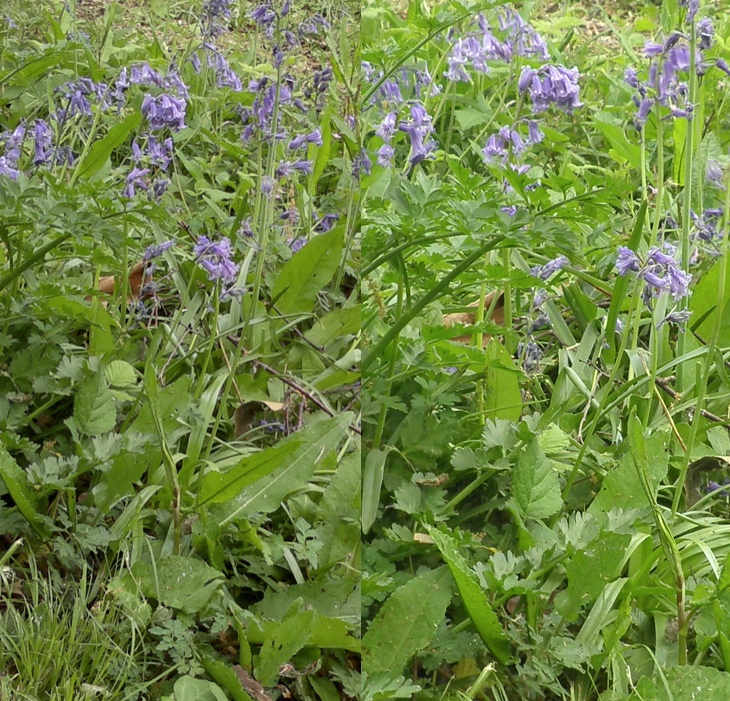 One problem here for a traditional camera is that it doesn't know where to focus and you get close up and far away parts of the frame being slightly blurry. Now, photographers like using this problem to good effect by creating a sense of 'depth', with a specific subject being crystal clear and everything else artfully blurred, but such advanced techniques are beyond what most casual snappers would consider.

The EDoF camera on the E7 'flattens' every image, in that everything's crisp whatever its distance, so the unskilled snapper can be sure that whatever is being shot comes out crisp. Photographic experts hate this flattening, but viewing the photo crops above, you'd have to agree that the E7's image is more instantly attractive.

What am I saying - that Nokia's EDoF cameras are superior to a standalone 14 megapixel top brand compact camera? Obviously not. Shoot in a wide variety of conditions and shoot a wide of variety of subjects and the Olympus would come out on top by almost any criteria. But that doesn't alter the fact that the E7 images above are not only 'good enough' for most casual photo-takers, they're better at normal viewing resolution and for common subjects than those taken on a more advanced, dedicated camera. And, by extension, better for many people than auto-focus cameras in an otherwise similar smartphone. Of course, I'm not saying that EDoF cameras are ultimately 'better' than auto-focus units of the same size and spec. Certainly not, for people who know their two-step shutter button from their zoom control. I'm saying (again) that it's better for casual users - which was partly Nokia's intention all along, as I argued in my treatise.

As mentioned above, the very fact that I've been daring to compare this EDoF unit with such a good standalone/compact camera is in itself a testament to the quality that's possible. I'll say again that the legions of EDoF critics should think before blindly criticising the technology - it has its limitations, but for the common use cases above I have shown that it will perform as well as (or better than) even a standalone camera. Which is good news for most 'normobs' and, hopefully, for Nokia, if they can get the PR message right about what EDoF 'full focus' is and does.

Steve Litchfield, All About Symbian, 2 May 2011 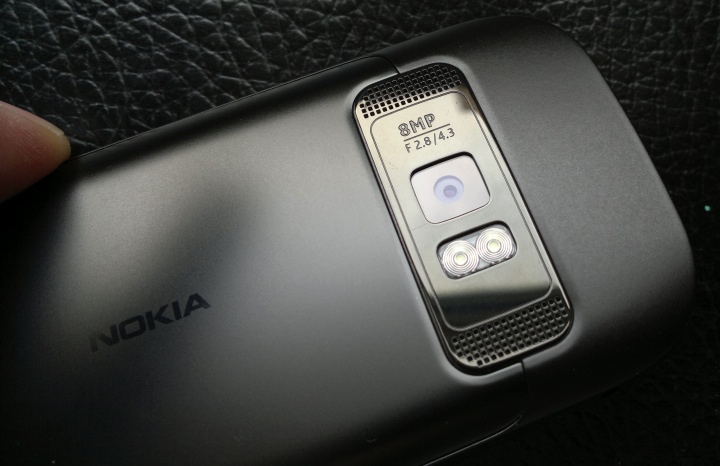