The pendulum swings regularly in the software world, with different ways of making money from software being in 'vogue'. The latest fashion, somewhat predictably, with most applications and games needing a price of 'free' in order to get serious numbers of downloads, is to put adverts inside the app or game and rely on income from these to bring in a similar amount of money to that which you'd have expected if you'd tried to sell the item by more conventional means. The concept is indeed sound - but I'm finding the implementation often lacking. What's needed is more imagination.

Let's take a free (ad-sponsored) game, almost at random from the Ovi Store: Bounce It - Free, as reviewed by Ewan here. It's a classic puzzle/action game, made free by forcing the player to tap past (or wait 10 seconds) advert screens between levels. Games are particularly well suited to in-app advertising, as you might imagine.

The developers are Hyperkani and they've used inneractive's SDK and 'ad-fulfilment system' to integrate ads, served up in real time, online, to hopefully make up with ad revenue what they'd otherwise have been hoping for in commercial game sales. Here's how it looks at the moment. Between each level, the user sees tiny (mobile-friendly?) banner ads: 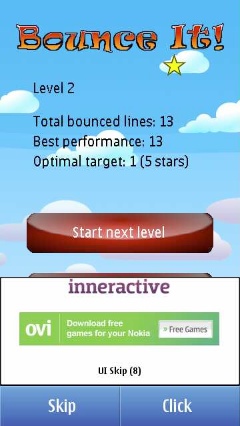 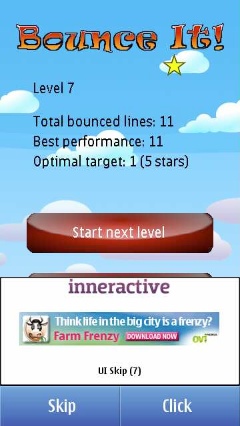 There are two huge problems with the current implementation: aesthetics and user experience. Both are really bad and the combination of the two will likely mean that the current generation of ad-sponsored games for Symbian will prove disappointing in terms of revenue - which ultimately means less titles developed for us to use and play.

Let's look at each of these in turn.

You'll be spotting the aesthetic problems yourself, but here goes anyway:

So, assuming that something in the aforementioned miniscule banner does catch a user's eye, they tap on the ad relatively excitedly - they're interested in seeing more. For Bounce it, with inneractive's current portfolio of advertisements, the vast majority are either for a specific Symbian title in the Ovi Store or for the store generally, presumably ads paid directly by Nokia.

In either case, the user first sees Web open and a page load. "Oh good, here comes the product info I wanted" thinks the user. Not so. What appears is a launch page for the Ovi Store. Which in turn... after a few seconds, launches the on-device Ovi Store client. This also involves a few seconds wait while the Ovi splash screen is displayed and removed and then... the opening page of the Store appears. 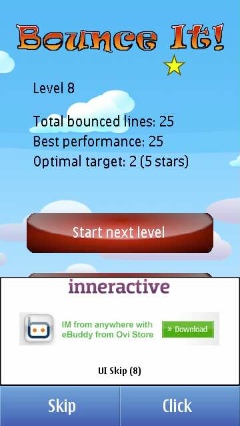 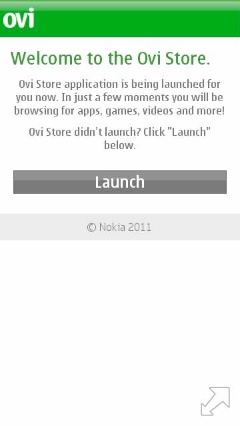 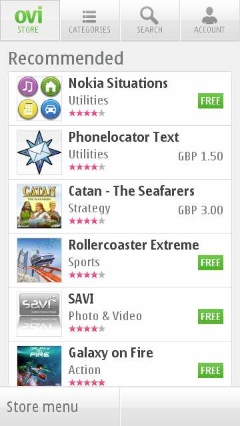 "Where's the product I tapped on?" thinks the user, and rightly so. It seems there's not yet any mechanism for the store client being launched with a specific product displayed.

All of which is frustrating enough for all concerned. Maybe, just maybe, the user will be motivated enough to go searching the store for the product they were originally promised. And maybe they'll spell it right and find it. And then maybe they'll try it or buy it. Maybe.

Even worse, half the times I tried out this inneractive/Ovi collaboration, the Ovi Store simply returned an error, advising to try later: 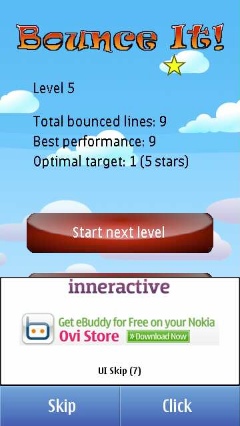 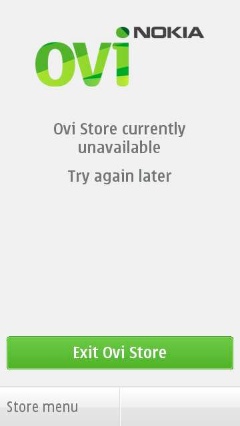 Note that in some cases, an ad will be shown for a non-Ovi Store product, here's an example, for '3' SIMs: 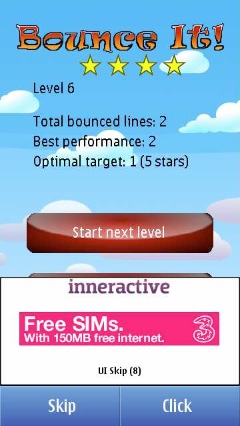 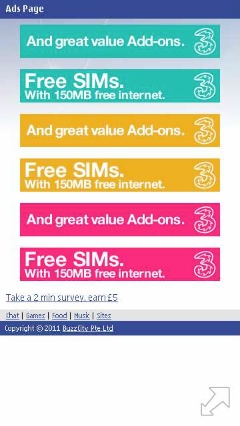 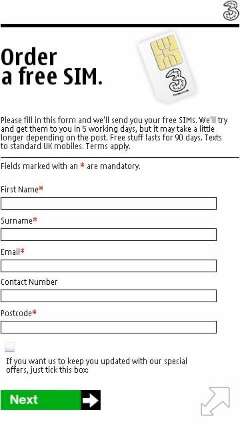 The trail from ad to offer summary screen to form to fill in works - but it's all extremely minimalist. There's zero acknowledgement at any stage that the user has a very capable smartphone, whose browser is capable of a lot more. I'm usually all for stripped down minimalism, but even I was longing for a bit more marketing glitz and glamour.

Whose fault are the deficiencies in aesthetics and user experience? I think inneractive and Nokia/Ovi have to share the blame here. We have an unattractive ad system that links to a clumsy handoff to products that the user probably did want to buy in the first place but has now gone completely off the idea.

The stats for Inneractive's use are impressive enough: 25% of daily Ovi Store downloads have the inneractive SDK built-in, as do 5 of the top 10 Ovi games. The company also quotes an average of 2%-3% click-through-rates across all platforms, though I'd be willing to bet the rate is a lot lower for the current Symbian implementations.

You may remember that Apple famously launched its own in-app advertising, dubbed iAd, for its iPhone OS (now iOS). Here's their launch video with a gallery of in-app iAds created by their developers, see if you can spot the difference in approach:

Quite impressive and absolutely the right way to go. Adverts, whether on TV or in applications or games, only work if they grab your attention and interest. Sometimes through the lure of free stuff, sometimes because they're really funny, sometimes simply because you really, really want to find out more about the product that's being showcased.

Ads in smartphone apps/games have a huge advantage over those on TV in that there's a dedicated data channel usually available for instant information and for possible purchase (especially through the likes of the phone bill), so mobile ads should be incredibly effective. If they're done right.

At the moment, a developer finished the app or game and thinks "Now, how can I best earn some money from this? Ooh, look at the download numbers for free titles in the Ovi Store and look, here's Nokia pushing inneractive's SDK, all I've got to do is add some code to my app/game and it'll monetise itself!" Err... no. It's not that easy. It's not supposed to be.

What's needed is for more imagination. Much more imagination. On both the developer's behalf and inneractive's behalf. Added to better integration into Nokia's Ovi Store, which urgently needs a way for apps to dive straight into a particular product page, ready to download or buy, without splash screens, generic home pages and error messages popping up.

For example, say I'm writing a game, perhaps a modern day version of my Formula 1 simulation (Team Psion/Pitstop). I decide to go down the route of in-game advertising as the best way to monetise it. After each race, I'd need to show an advert - but not just any old tiny banner with the problems just mentioned. My game would run at nHD resolution, of course, like all of today's Symbian games. What I'd need from inneractive (or another ad serving company) would be a full nHD (or close to this, perhaps a standard 320 x 480 panel, that would also work well on Android and iPhones) advert. At its most minimal this would be a static image (but hey, at least it'd be visible, colourful and eye-catching), at best it would follow Apple's iAd model and contain some multimedia and/or interactive content. 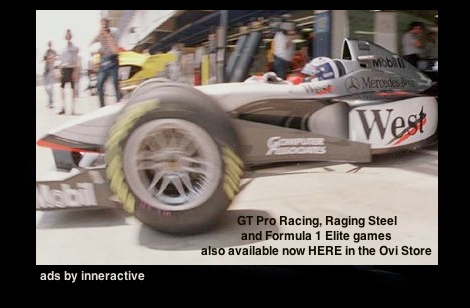 Hopefully this would be at least tangentially relevant to my app or game and hopefully the target web site or store would have its house in order by this time and the user would be taken to a genuine, attractive and compelling product page for whatever was being advertised.

Steve Litchfield, All About Symbian, 18 January 2011