One of the future technology demonstrations at Nokia World 2010 was an innovative system for providing indoor location services. Indoor positioning has always been a missing link in navigation software because GPS signals cannot penetrate into buildings. This new system from Nokia Research Centre has the potential to revolutionise navigation, providing a seamless transition between outdoor and indoor navigation. For example, allowing people to navigate to a public place, and then find their way around once inside, and much more. Read on.

While at Nokia World 2010, I spoke Fabio Belloni, part of the local positioning team at the Nokia Research Centre in Helsinki, Finland. Actually, I had quite a long conversation with him, as I was fascinated by the inner workings of this technology. Although, as he reminded me a few times, this is a proprietary technology being developed by Nokia, and so the inner workings were magic. Although I pressed for as many details as I could, to share with you here!

As most readers will know, GPS location fixing works by a receiver (i.e. the GPS chip in your phone or SatNav) processing info from signal satellites. Similarly, for this indoor location system, an transmitter is installed at a known location within a building, from which a phone can receive its signal and work out its position. The first benefit of this system is that the transmitter operates in the same 2.4GHz frequency band as WiFi and Bluetooth, and therefore phones don't require a special receiver to be built in. Any WiFi or Bluetooth equipped handset is already compatible, and only needs software to be added. What's more, receiving these short-range radio signals means that the power consumption is kept low, 1/30th of the the power needed to receive GPS signals.

GPS relies on a method called triangulation. Without getting too heavily into the maths, it will suffice to say that triangulation allows you to calculate your position as long as you can determine your distance from two (preferably more) known fixed points (e.g. GPS satellites). It soon became apparent that the same was not true for this indoor location system. Due to the proprietary technology, which despite all my efforts I could not get a single hint of how it worked, a phone only needs a single transmitter to determine its position. The only detail I was able to gain, making it even more amazing, was that the the phone application is actually able to calculate the angles between it and the transmitter - my assumption was to think in terms of a spherical-polar coordinate system, relative to the transmitter. I was also told that a single transmitter could cover an area of 200 square meters. 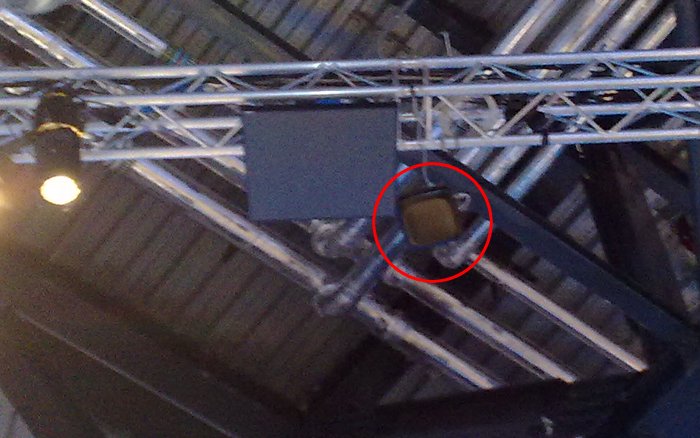 Even though the system only needs a single transmitter, the software is capable of processing more than one indoor-location signal, thus improving the accuracy, much like GPS. While the demonstrators were showing the location software operating on a floor map of the Experience Lounge, it wasn't a fully working system; instead they were wearing location receivers under their shirts, which was forwarding location data onto their N8's. [Magic? More like sleight of hand?! - Ed]

While it would be relatively easy to retrofit the transmitters to existing buildings, Fabio said that they hoped that in the future, builders would begin to integrate these devices into buildings during construction. Of course, for indoor location to work, floor plans would need to be available. Fabio told me that they would expect mapping software (e.g. Ovi Maps) would intelligently switch modes; there would be no requirement for users to switch applications or manually change modes. In this case, there was a technological question of how to handle the transition and the handover from outdoor positioning systems to the indoor system. A digression to this particular topic was the question of mounting these transmitters on the outside of buildings. This would both provide an overlap area for the hand-off into internal navigation mode, but could also be an extra method to provide location fixing when outside too. 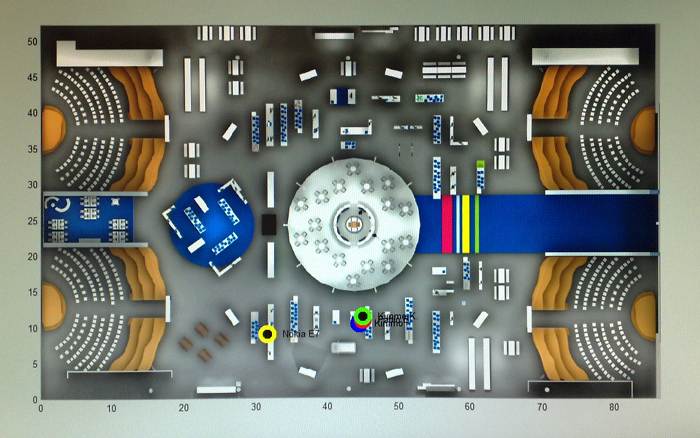 A floor plan of the Nokia World Experience Lounge, tracking the location of several handsets

There are a wide range of potential applications for internal location. Examples I discussed with Fabio covered:

Because the indoor location system is a receive-only system, there is no issue of privacy leakage either. The user would have complete control over whether they choose to disclose their location (think FourSquare-esque check-ins). Unlike, for example, cell tower based location which is always tracking the approximate location of one's phone.

David Gilson for All About Symbian, 26th September 2010