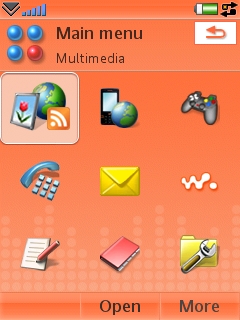 Interfaces are in the news a lot at the moment, and it would be fair to point out that UI design is a thankless job – because everyone is going to have a little thing that they think is wrong and should be done another way. The W950i is no exception, as I’m about to prove.

And I’ll point out that I actually like the W950i – I’ve been using it as my regular phone now for over a month and it’s approaching the point where I know it will work, and I’ll trust it as my main (and sometimes only) device. The fact that I feel it can still improve (and I want it to improve) do show a large commitment to design from Sony Ericsson. But I digress…

Fundamentally, the W950i’s UIQ interface is the same as that of the other UIQ3 machines, but with each model having a slight tweak to accommodate the form factor and target audience, there is a certain respect for the end user. For example, the W950i clearly has no flip, so there’s no need to have the standby screen driven by the same system as the P990 uses. It’s also safe to assume that there will be a lot more stylus interaction from the user, so that can be taken into consideration as well. 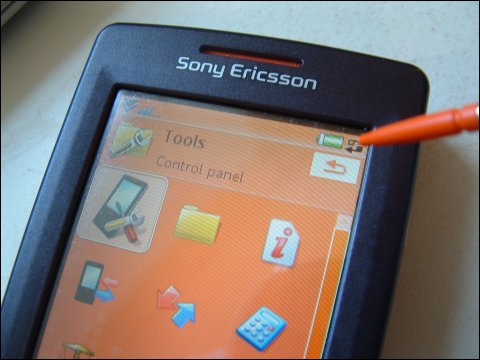 Many of the UI features can be found using a nice big thumb (well, this reviewer’s thumb) along the three soft-keys at the base of the screen. Some of these are direct actions to take you to other screens, others call up menus or dialogs where the scroll wheel and click can be used – which is a genuine one handed experience. 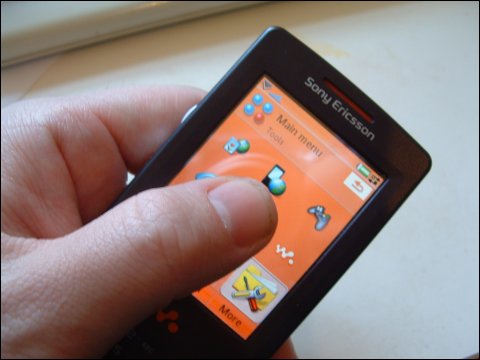 But there are just enough functions requiring the accuracy of a stylus in day to day operations that unfortunately mean you have to stop, pull out the stylish (ahem) orange and silver stylus from the rear of the phone to do anything with real depth – and that goes for any decent amount of text entry. Using the keypad and T9 for a standard SMS can be a frustrating experience, and for speed reasons you really do have to switch to the ‘pretty accurate’ character recognition system from CIC - Jot.

Jot hasn’t changed that much since it was made available on the P800 – but we’re still left with this as a single choice. The Windows Mobile based smartphones have a choice of four different handwriting systems, from single letter block recognisers to fully cursive sentence recognition. It would be nice to see if UIQ could develop or licence some of the alternatives. While Jot is accurate, it does take a bit more learning effort on the part of the end user, quite apart from the two-handed stylus use issue. 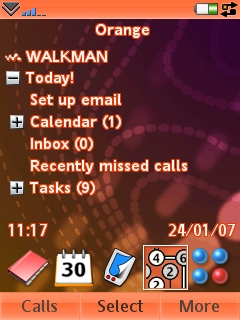 Let’s start at the home/standby screen. Presenting a tree based guide to your day, you can expand out the tasks, emails and appointments that you have on a daily basis. I found this a great way to present the relevant information. You can see what is waiting, and if you want to expand it out and see more detail, you can, and you don't need to leave the home screen. The default font (chunky white characters with orange outline) does mean that there’s very little room for text to be displayed in full, but this is highly personal – as you all know, one of my bug bears is wasting screen space with big fonts and no zoom option for the user.

You’ve then got the time and date on display, and apart from the Clock application this is the only place where you can see the time. Okay, whose smart idea was this? The status bar at the top of the screen has more than enough space for a small digital clock (as all the previous Pxxx phones have had). To add this in would bring the W950i into line with pretty much all the regular phones out there, including the existing Sony Ericsson Walkman phones, almost all the Series 60 devices, and more. It’s incredibly frustrating to me to not be able to glance at the screen to get the time. Most UI choices I can justify in my head, but not this one. 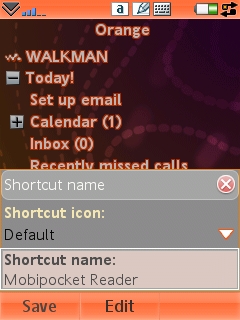 Along the bottom of the home screen are five ‘quick access’ icons – these are editable to point to any program you wish, and are big enough so a thumb press will activate the desired program, just like the soft menu keys at the base of the screen. Interestingly, when you first start the W950i there’s yet another Walkman icon, taking pride of place as the first shortcut icon (lest you forget what this phone is really for).  Not surprisingly, that got changed to something far more useful in double-quick time.

Finally, back up to the top of the screen, where you’ve got your status information along the top bar, with signal strength, battery and the task manager icon.

Now I know the idea is to hide as much functionality as possible from the end user, but you still need a task manager to show what applications are running, and to allow easy switching to another application – for example you might want to jump from your ebook reader (after highlighting some text, for example "and it turned out Snape was actually Harry’s father" and email it to Rafe). Without a task manager you would have to press back, back, back to get to the home screen, then two presses to get to the email application. The Task Manager will let you see which programs are currently running, and also shortcut the last few programs that have been launched. Which should lead to a better experience.

But yet again there seems to have been a strange decision in the UI design. Call up the Task Manager and you are not presented with the currently open tasks, but the 'recent applications' list. Ehrm, does that make sense? Well it will to some people – first of all it’s likely that your open apps will be one of the last five open (but not guaranteed), and the Main Menu and Standby screens are always listed at the top. It just seems that UIQ have decided to add another tap to a basic computing process. I fail to see why [ - I can see why, I think I'm with Sony Ericsson on this one, for new users, at least - Steve]. 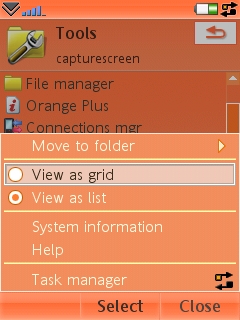 Much like S60, your applications are printed on screen in a grid of icons, here in a 3x3 format. You can switch this to a list, with a smaller font size (yaay!) that shows ten applications and their names – the icon screen is only the icons themselves, with no annotations – but these icons are thumb sized, so work for the one handed user on the move. Some of the icons are for applications (you just know before I mention it that the Walkman icon is in there), while some of them are folders to more applications (e.g. Organiser leads to three icons, for Calendar, Notes and Tasks).

As well as my first steps with a new phone (see here for the full article), I always like to move my icons around. For example, with a multimedia folder, it makes sense to me to move the Walkman icon into there, and I tend to make the organiser folder a PIM folder, and add in the contacts, messaging and clock applications into it. Except UIQ3 won’t let me do this.

Now I know there are some thing that UI designers choose that need to be fairly fixed, such as the initial layout of the icons on the launcher, but (as a lapsed programmer) I cannot see why you would not provide customisation as an option for the power user. People who would leave the icons alone would never see it, but those that want it would find it. Quite simply, by locking out this functionality for the built in applications, Sony Ericsson are directly reducing my productivity. Every Symbian OS-powered phone from the Nokia 7650 onwards has had a similar icon layout when in my hands. The eBook reader goes in the centre of the screen. The PIM applications have a folder, anything that connects to the Internet goes into another. Extra applications go in a folder labelled "Extras". And they all live in the same physical location on the screen/grid (I have a similar system, with my own personal layout on all devices, which UIQ3 won't let me implement - Steve). 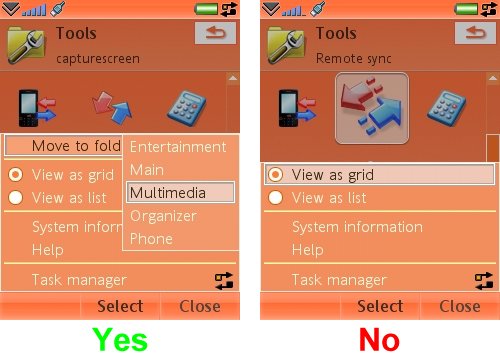 Someone in Sony Ericsson has decided not only that they know better than me in laying out the icons, but won’t allow me to change the layout of my icons on my personal phone. You might say this is petty and small minded ("it’s petty and small minded" – shout from the back of the hall) but to me, it’s a potential deal breaker and the one thing on the W950i (and the other UIQ3 devices) that would make me not use these phone in day to day life.

Right at the top of the article, I qualified all of this with the note that I actually do like the UIQ interface. First of all it doesn’t make any huge attempts at hiding any information – generally if you want to know some of the technical details then they are available to you (e.g. the Task Manager shows how much RAM a running application is taking; you can access directories and files through the File Manager, you can directly manipulate those directories from your computer, etc).

And let’s not forget the 80/20 rule. Most of my problems with the UI are more things asked for by power users – and we are not the exclusive target demographic for this device. For the majority of people using this device the touch screen, the scroll wheel, and their thumb will be able to access maybe 80-90% of the features of the phone, and that’s more than likely all the functionality they will need.

Smartphones nowadays are highly complex devices, so for any UI to work smoothly is an achievement in itself, and the UIQ interface is very much suited to a device with a lot of applications and potential. The fact that it manages this without complaint is one reason why I like it, and keeping the functions hidden is another.

So why, on balance, do I find the UIQ3 interface on the W950i a touch annoying? Because it is almost there. If Sony Ericsson take in as much feedback as possible, then it could easily become a magnitude easier to understand and use. Yes, it does do everything that it technically needs to do, but it does not do it all well. When Jeff Hawkins started designing the Palm OS interface he made a simple chart to count the number of taps that any operation was from the main screen – his target then was four taps to anything. Steve Jobs in the recent iPhone launch promised two taps to get to anything (of course he doesn’t have third party apps to worry about [hah - Steve]). The User Interface is set to become a major battleground for mobile devices in the next twelve months as the hardware and capabilities reach a plateau – and the Sony Ericsson W950i is in need of urgent reinforcement.

In the next part of this comprehensive review of the W950i, I’ll look at the built in applications, from the PIM software and Internet connectivity to the little utilities that provide hidden benefits.