Continuing the in-depth review of the Sony Ericsson W950, Ewan takes a look at the internal application suite. 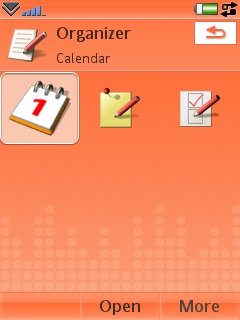 The big four management apps are the PIM applications – your Contacts, Calendar, Notes and Tasks/to-do’s. What is important to a user here is two-fold. The first is the ability to find the information he needs on his phone as fast as possible; the second is getting the information both into the phone and taking out the changes.

Synchronising the data is very easy – hook up the phone and your PC, and the Sony Ericsson PC Suite will get to work and match up all your Outlook data with that on the device. It’s incredibly fast, simple, and can be set up to do so automatically – and while I’m old fashioned enough to not have the auto-sync box ticked, I have every confidence that it would work.

What I don’t have confidence in using is Notes and Tasks. On my Outlook installation I have these spit out into categories (or folders). So I have one set of tasks in the folder (AAS UIQ), some in (AAS Podcast), some in (Shopping) and some in (Local Radio). None of this information is transferred over to the W950. I could be fair and point out that no other UIQ or S60 phone handles this – but on the other hand it’s something that Palm OS and Windows Mobile have had worked out from day one.

It's even more irksome here in UIQ 3 because the Tasks and Notes applications actually have a folder system, yet it has no relation to the folder information that the PC could offer at sync time! I’m not going to enter my information twice (not with the amount of balls I juggle at once), I’m just going to not bother using the applications unless I really have to, and remember to move any new items from 'unfiled' to where they need to go when I get to my PC. 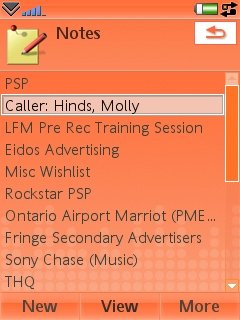 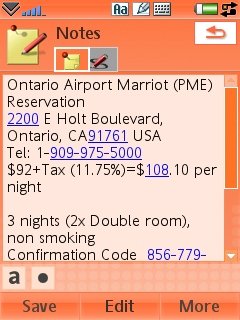 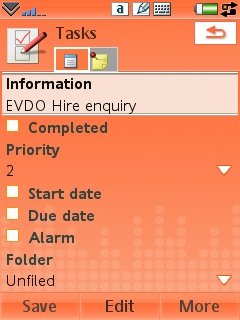 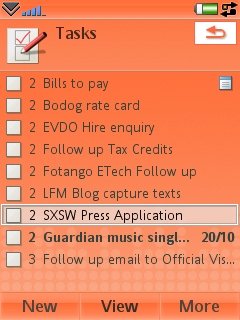 However, for the review, I persevered. Underneath the organisational problems, these apps are incredibly similar, and are pretty easy to use – in fact the only difference in the Notes application compared to the Tasks application is the appearance of the tick boxes and priority numbers. Underneath, each app has two screens – tasks has a screen for text and a screen for setting information such as the priority of tasks and when it started and when it finished. Notes has the same text screen, and a second page for ‘doodles,’ essentially a basic sketch application.

I will take my hat off to the Calendar application though. It makes great use of the screen, especially in the default view – with a month view and little squares showing an entry, and a breakdown of the highlighted day at the bottom of the screen. Click through on a day from the scroll wheel and you get taken to the day view, where you can choose and edit an entry, or move to an empty space and enter a new appointment. Again we have a tabbed dialog with the most important information at the top, and then extra info on subsequent tabs. 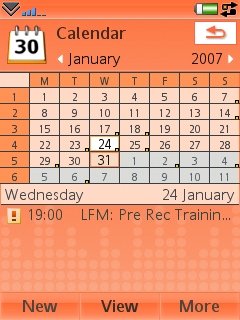 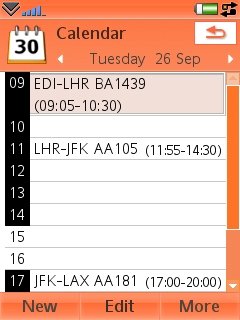 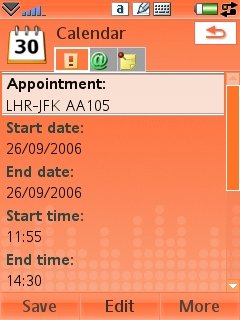 I like that this tabbed dialog is the same over all the PIM applications – I know that the idea of a consistent interface is drilled into the programmers and developers in the Symbian OS world, but for someone coming to the system new, this is vitally important. You learn one application, and your common sense will show you how to use the others.

Onto the final PIM app, and it’s probably the key in any smartphone… Contacts. Your phone numbers, email addresses, web URLs and other details of all your acquaintances are in here – the proverbial little black book in the modern world. Unfortunately, for me Contacts fails in one common sense way that has me a touch frustrated, and it’s in its search function.

You have to be super careful when searching for names. Just as in the music application, you can only search from the beginning of the string, not for text in the middle. By default the W950 sorts by surname and then first name. This means if I look for "Rafe" then I can’t find him. Put in part of his surname (Blandford) and you’re fine. Now you can switch that round to first name then surname, but then RAF works and BLA doesn’t. 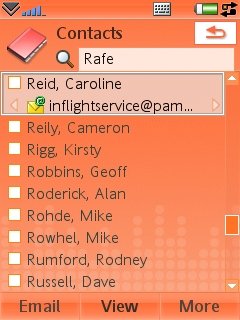 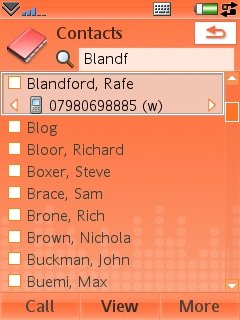 With the processing power behind the W950, surely this is something that is easily rectified? Apart from this, the contacts application runs on the same rails as the other PIM applications, talks nicely to the PC Suite with your data, and is generally pretty reliable.

It’s worth pointing out that while the W950’s PC Suite is only for Windows, it talks to both Microsoft Outlook, Windows Address Book, Lotus Notes and Lotus Organiser. 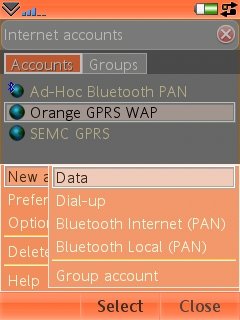 For those of you buying the device SIM free, the W950 uses Sony Ericsson’s automatic configurer, so you can go the Sony Ericsson web site, tell it your network and phone number, and you’ll get your settings sent over the air to you [NB. the same basically applies to any other phone these days - Ed] – hey presto, one configured phone. Your network provider should be able to do the same if you’ve bought it on a contract. It’s a good system, not as 'plug and play' simple as reading the SIM card and checking an internal database (as Nokia do) but it means that any errors in the setup, or new systems, can be easily accommodated by Sony Ericsson.

Hardcore (Old Skool) users can still enter and tweak everything by hand in the Control panel, of course – although the settings are spread over quite a number of dialog boxes and areas.

Setting up your email, perhaps counter intuitively, is also done in Control panel, although at least you have a shortcut in the menu system of the actual Messaging menu. As is becoming the norm, all your incoming messages will end up here, be they SMS, MMS, emails or received files over Bluetooth. Each email inbox has its own top level folder – and these folders can be set to refresh automatically at regular intervals to check for new messages and potentially download the headers or the first few K of any messages – think of it as a poor man’s push email and you’ll be there. 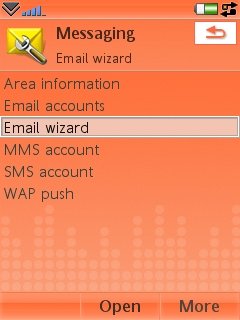 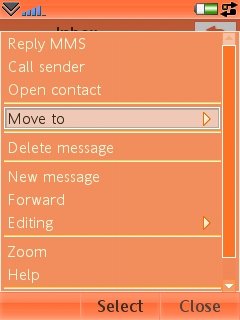 Unfortunately, the W950 doesn’t come with viewers for Microsoft Office files, so when you get that Word or Sheet document in the mail, you’re not going to be able to read it – it’s text only I’m afraid. This isn’t as bad as it sounds, as the target market for the W950 will not be looking for Office support, and it can easily be added by third party software if needed.

The other main Internet component on the W950 is the Web browser – it’s actually Opera v8.0, and it’s a very good mobile browser. Where Nokia’s current browser’s goal is to replicate how a web page would look on a ‘full’ browser, Opera is more interested in presenting you with all the information in readable form – this involves the Opera Small Screen Rendering engine to take into account both the content of a web page and the size of your screen. I like the fact that it does its level best to eradicate the need to scroll left and right – which means the scroll wheel is a great way to navigate through pages – and the strengths of the touch screen become very obvious when you are navigating links with the stylus.

All this can be toggled off and Opera will render the page normally – sometimes needed with complicated layouts that just don’t lend themselves well to repurposing. You can also switch to a landscape mode – sometimes this makes pages a bit easier, but the ergonomics of the W950 make it uncomfortable to use for long periods. 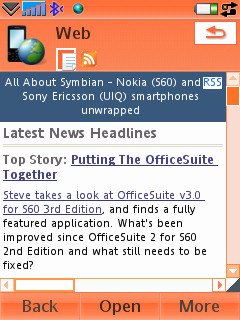 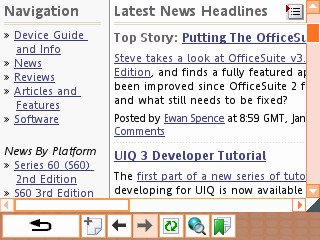 The Web browser does what it needs to do and does it well – there are no flashy graphics, slides or transitions. It’s functional and fast, and that’s good enough for me.

As well as the major applications, the W950 ships with 27 seperate application icons. While not integral to the phone, they provide some great extra functionality – previously you would expect these to be delivered by third party software - but they are now bundled in alongside the core applications. A few of the highlights for me were…

A basic RSS reader – great for checking a few web sites, but without an import function it’s not going to read all your feeds. I’d still recommend using the mobile web version of Bloglines (mobile.bloglines.com) or Google Reader (details on how to get started).

The FM Radio provides an alternate source of audio entertainment, but you must have the headset plugged in to act as an aerial. It’s a nice touch, especially as any calls will result in the ringtone interrupting the broadcast so you don’t miss the call. 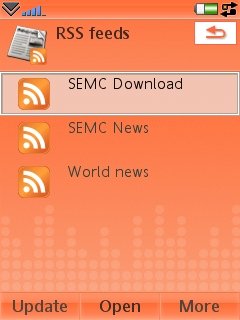 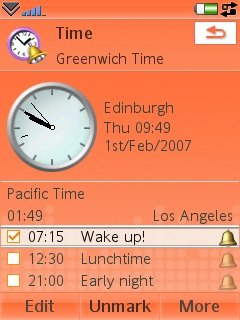 There are three time-based applications – the standard  Alarm Clock, with three programmable and tickable alarms, hasn’t changed from previous UIQ devices, I just wish that if you set an alarm to an MP3 music track then it would play the whole file and not just loop the first 30 seconds. There is also a Stopwatch (where the counter increases) and a Timer (where the counter decreases). What’s great about the last two is that they are displayed on the Welcome/Home screen, so when you set 25 minutes for something cooking, a quick glance will show where you are up to.

Finally, Nightclub Empire is a small ‘Sims’ like management game where you start with a small pool of money, a deserted nightclub, and trade your way up to the dizzy heights of fame and notoriety.

In the concluding part of this review series, I'll be summing up the Sony Ericsson W950i and delivering a verdict!