After reviewing quite a number of emergency power banks on these sites, most of which have been quite impressive, I think we have a brand new winner. In terms of build quality, output, capacity and sheer value, the Omaker Premium 15600 wins out over the rest of the competition by a clear margin. As you'll see from my illustrated review below, testing the Omaker with Symbian and Windows Phone smartphones, plus an iPad or two...

The use case for emergency power banks is obvious, of course, albeit more so for smartphones (such as the Lumia 1020, below left) which have a sealed internal battery - what DO you do if you're at 10% left at 5pm after a particular heavy day?

That smartphone battery capacities have been rising and rising in the last few years haven't helped much in terms of useful battery life, since processors have been getting faster and screens larger and brighter. In fact, the increase in battery capacity has necessitated larger and larger emergency power banks - three years ago, my 5000mAh bank was enough to charge any of my smartphones three times over - we've now got to the stage where mid-to-top level smartphone batteries average around 2400mAh, and with phablets at 3000mAh or more, and with tablets at well over 5000mAh. Allow 30% or so 'loss' in any transfer/voltage conversion (as heat, mainly) and you can see that any power bank has to now be up in the 10,000mAh+ range to make it worth carrying around with any serious intentions.

The £27 Omaker Premium 15600 Power Bank is brand new to me and immediately impresses with some genuine unique selling points:

Only kidding about that last one, obviously. I think.

The Omaker comes with a velvet carrying bag (if you want to keep other stuff away from it!), plus two high quality white microUSB-to-USB charging leads. And yes, I tested charging 'through' the Omaker (i.e. charge into it and simultaneously charging something else out of it) and this worked just fine.

Here's the Omaker Premium 15600 charging a Windows Phone and a Symbian smartphone: 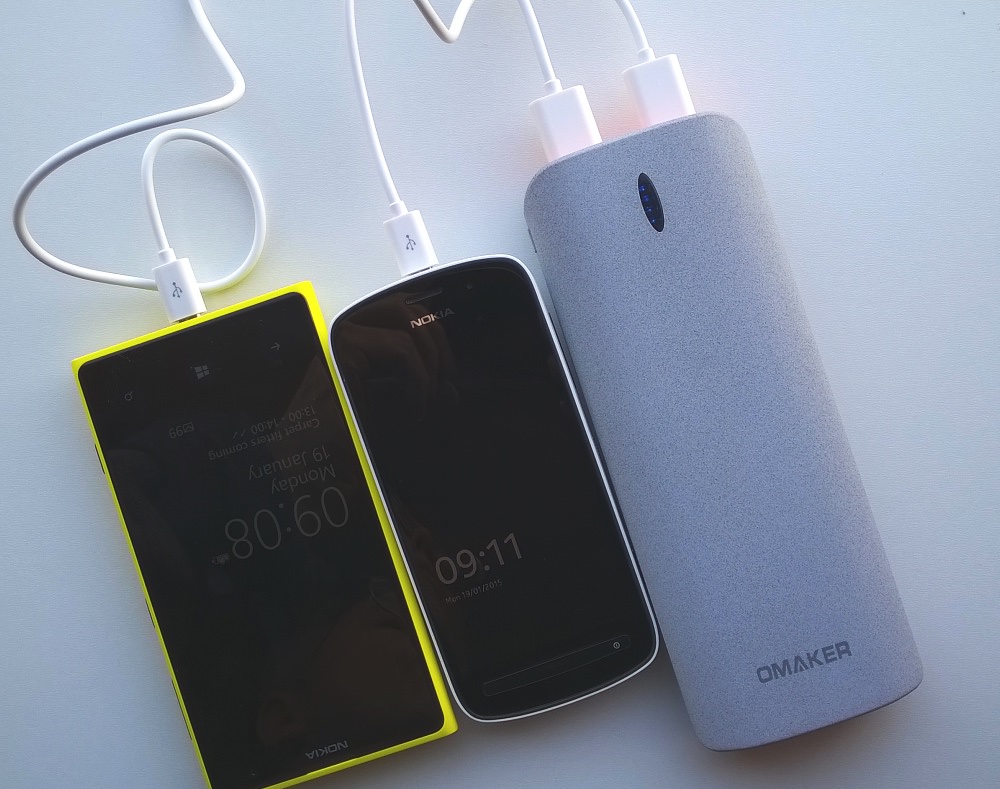 I also tested the accessory on an Android phone and an Apple iPad mini, with complete success. In fact, it charged the iPad from 50% to full in under two hours, while 2.1A per port is more than enough for any Windows Phones or similar, of course.

The twin 2.1A ports are mainly handy in that, when plugging in a thirsty phablet or tablet, you don't have to look too hard  to check which port you're plugging into. But also if you happen to have two high current devices that need charging at the same time. Nestled in between is the microUSB input, the idea being that you can top up or recharge the power bank itself from any convenient source. It can charge at up to 2.1A too, though with that 15,600mAh capacity, we're looking at an overnight charge even on the most prodigous mains chargers. And, with a typical 1A phone charger, that's the best part of 24 hours in reality. But then you're not going to need to charge this beast every day... 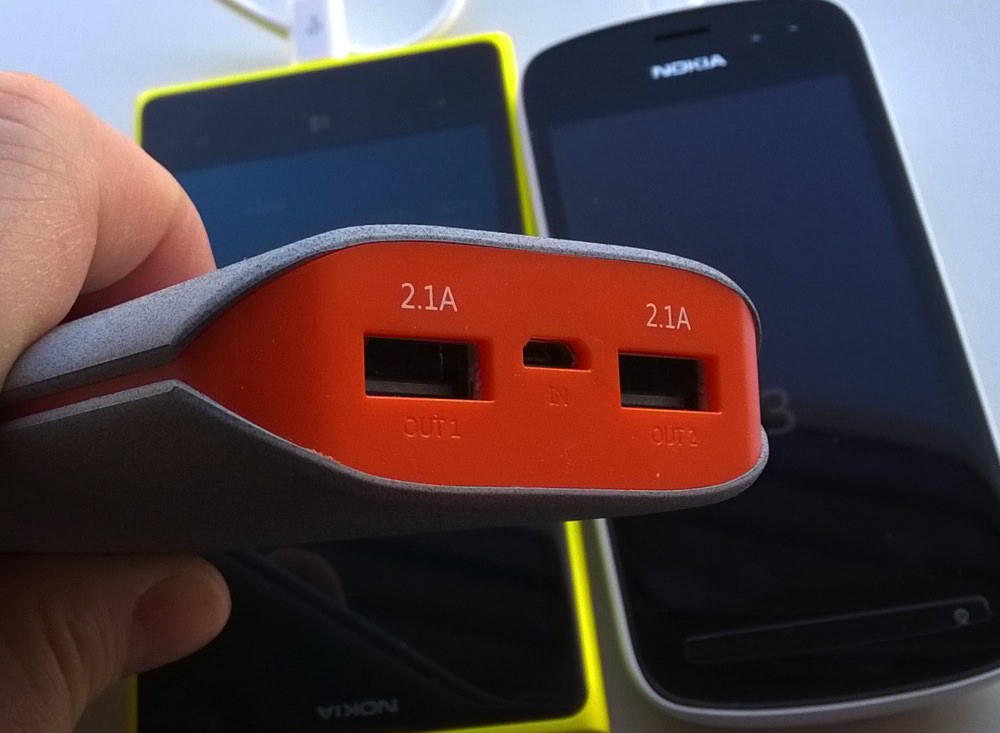 The obvious question, for real power users, is whether both ports can output the full 2.1A at the same time. Although it's hard to get an accurate readout on this without breaking open wires and using an ammeter, I plugged in two iPad tablets and both started charging quite happily, with none of those annoying Apple 'slow charging' warnings. So the answer appears to be yes.

The basic specs are handily printed on the Omaker's other end cap: 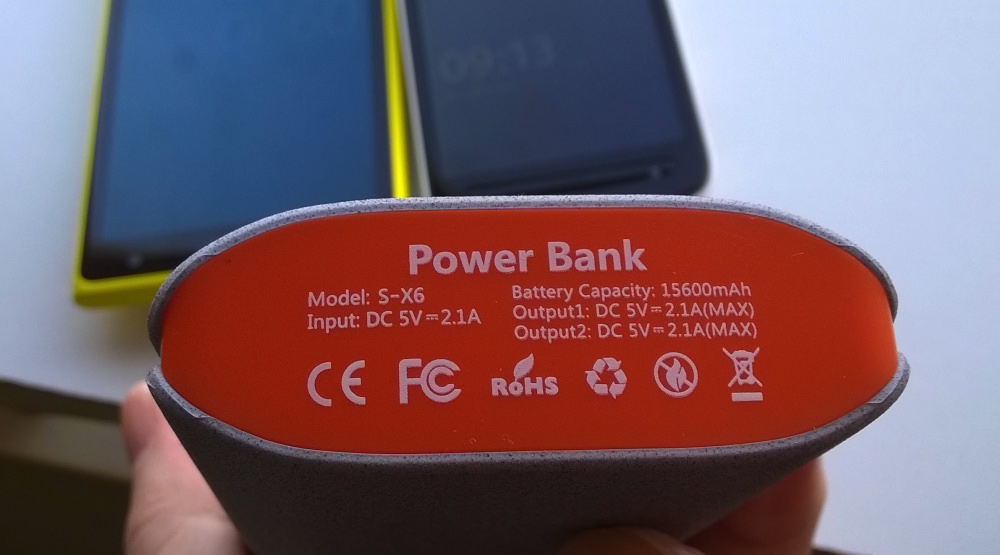 As usual with these power banks, there's a side button to activate (if needed) an LED readout indicating the various charge quadrants: 0-25%, 25%-50%, and so on. These are shown below, along with an idea of the 'frosted polish' finish - which is really rather unique. It feels closer to rock than to plastic, it's very grippy and probably very abrasive. 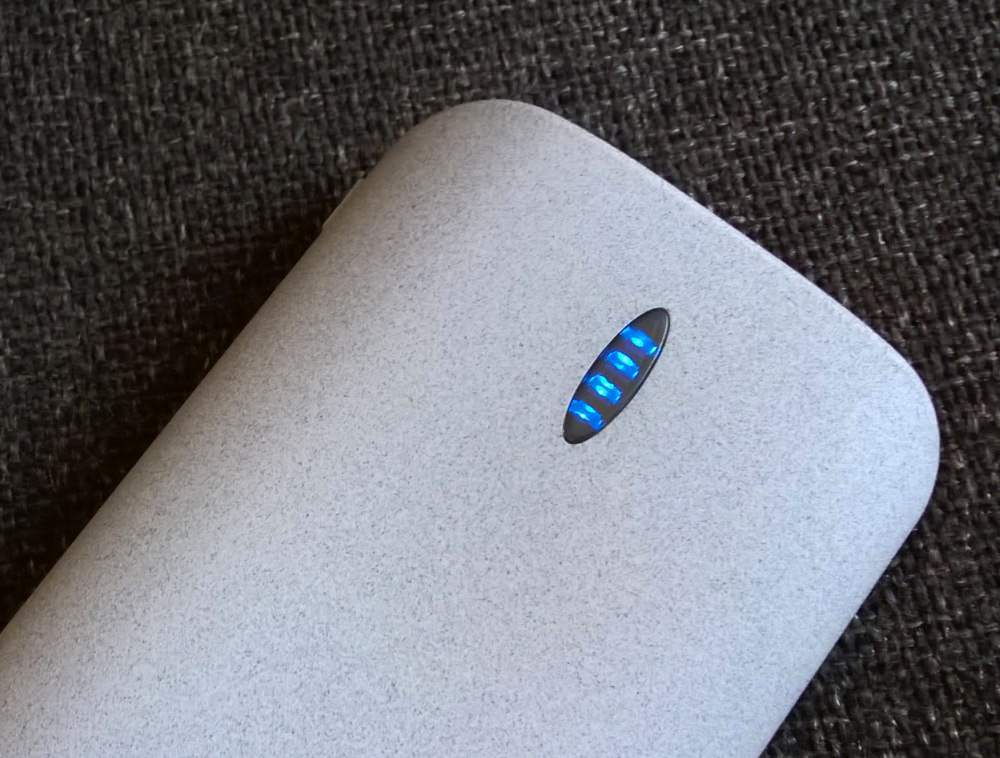 The combination of the finish with the rounded profile and sheer density (it weighs almost 350g) makes for a terrific impression. It's easy to hold in one hand if needed, easy to slip into a jack pocket, easy to find space for in a briefcase or gadget bag - it's just very well designed.

The side button activates the LEDs if you want a quick check of the Omaker's state when not connected up - and in theory is needed to start charging, but in practice the auto activation seems to make sure that charging starts immediately that you plug something in, regardless of the button - and the LEDs come along for the ride, making this a low maintenance solution all round.

Now, obviously, I've only had this for a matter of days, so a longevity test will have to wait for many months of regular use - but in its first couple of charges, the Omaker Premium 15600 charged up two iPads, two Android smartphones, one Nokia 808, four Lumia Windows Phones and an iPhone 5. Mostly from scratch - and that's pretty impressive.

With the small caveat that you obviously need to bring along a suitable USB charging lead or connection for your chosen devices, this accessory seems to be just about perfect for the tech-head (and family) on the go. Recommended.

The Omaker Premium 15600 will, no doubt, be available online from many outlets - our review device came from Amazon UK here and seems to be on sale, at £27, which represents excellent value.