If you are into microblogging, in particular, if you love twittering and using Symbian, this is the app you are looking for. Gravity v1.00 by Mobileways is now released, the first fully-featured and native Twitter client for the S60 platform (3rd Edition and 5th Edition). It supports multiple accounts, Twitter Search, Laconica, TwitPic and wraps everything into a gorgeous looking interface. Screens and more info below, while Ewan will be having a more detailed look at the app later this week. 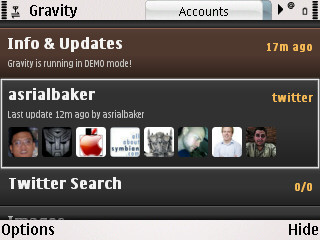 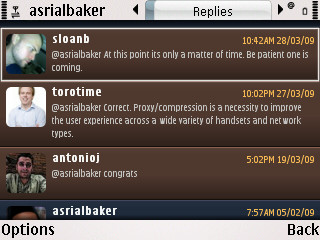 Gravity has a strong feature list, many of which will be familiar to Twitter users with other mobile clients, including:

Looking at it, I wonder why it took so long for developers to produce a native S60 Twitter client? Previously, there were other mobile solutions for Twitter but all were J2ME, not native S60 code. And while we're still talking about social networking, where is the S60 native client for Facebook? The mobile Facebook site (http://m.facebook.com) is cool but there is huge scope for innovation

A Quick Thought From Ewan

Having also been part of the Gravity beta test group (and also recalling Mobileway's implementation of Twitter in their WirelessIRC client) I have to say I'm supremely impressed with this Twitter client. If there was ever a case of software improving a web product, then Gravity is up there on that list. For those of you used to using Twitter on your desktop, Gravity is as revolutinary on S60 as Tweetdeck is for the desktop clients. If you use Twitter while on the move, there really is no reason to not try the demo of Gravity.