Are the stereotypes right? What your phone says about you!

You walk into a meeting with device X. You ride on the tube with device Y. You stroll around the park with device Z. What impressions will others have - and will these impressions be accurate? In the editorial below I give a few examples but would welcome extra real world anecdotes and data points!

Idly reading through Michael Mace's blog this morning, I was taken with this paragraph:

I've spoken to plenty of RIM users who would be embarrassed to carry a music-playing, video-watching hunk of eye candy like the iPhone into a business meeting. It's like announcing to a client, "I spend my work time on YouTube."

I think the always-intelligent Michael has a good point. It's very easy to focus on raw functionality and raw usability when comparing handhelds and phones, but there are social factors that can be just as important in the real world.

Let's start with Michael's example. You can probably substitute the Nokia E90, E61 or E71 for RIM, by the way, the point will still work. The Apple iPhone is seen, fairly accurately, as a supreme example of a media-consuming device, centred around Safari (Web), the iPod music and video players and a YouTube browser, whereas the Nokia smartphones just mentioned are (again accurately) seen as focussed around their email and office capabilities.

So yes, if you walk into a meeting with a Nokia E90, everyone in the room 'knows' you mean business and that you're going to work hard at whatever you sign up to. Conversely, if you're sat on a train listening to your music collection on the same E90 then you're probably pretty sad. Or me. An iPhone would be a far, far better choice and would, in truth, fit in a lot better in terms of your surroundings.

These preconceptions are a little unfair, of course, as the E90 and E71 are passable music players and the iPhone is a passable enterprise email device - but you'd have to admit to a grain of truth in the stereotypes.

What about Nokia Nseries devices like the N82, N95 8GB and N96? If the iPhone is for 'consumers' and the Nokia Eseries is for 'workers', then the Nseries stereotype, again fairly accurately, is surely for 'Media Creators'. The biggest single selling point in these top Nseries phones is the 5 megapixel camera with VGA video recording. Time and again I come back to the N95 marque, for example, after dallying with other phones, simply because I want to create - photos, videos - and as such I want the highest quality possible from my 'converged device'. 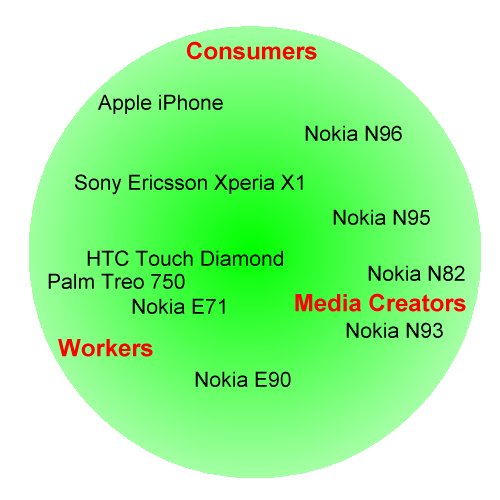 There is, of course, considerable overlap in terms of functionality when you look at devices in detail (hopefully the chart above will help picture this), but the stereotypes remain. There's the business meeting example. And on the train. In the park or at the beach, taking photos and videos with a Nokia Nseries tells anyone vaguely knowledgeable that you know what you're doing and that the results will be worth keeping. When I see someone snapping their kids at a playground with an iPhone or Treo or RAZR, I can't help wonder why they bother - the results aren't going to be worth printing or viewing on a TV or monitor.

I was at my daughter's school open day last week. I shot some video with my N95 from the front row and showed it to another interested parent, whose daughter had been standing next to mine. She remarked that my video images were clearer than the still photos she'd been trying to take, with her RAZR, from the row behind me. Maybe a slight exageration, but even still, the N82 and N95 are just superb for creating media content.

Conventional wisdom about personal maturity says 'Don't spend your life worrying about what people think of you - be confident in who you are and how you appear'. It's good advice in theory, but in practice each of us does worry, to some extent. We all like to 'fit in'. Whether a professional in a business situation, a chilled out train traveller, a snap-happy parent or tourist or a wannabe arty video blogger, there's a phone that looks right and, in all probability, is right.

Or am I being overly simplistic? What stories and thoughts have you got to share? How accurate are the stereotypes?

This is your Monday morning discussion topic! 8-)

Filed: Home > News > Are the stereotypes right? What your phone says about you!