Whoever thought this would happen? The presumed-forgotten Nokia E61i just received a firmware update from v2.0633 to v3.0633.69.00 (for unlocked Euro versions anyway, yours may vary slightly). [update] The E51 just got an update too, to v200.34.36, so NSU is most definitely your friend (E51 tip via the Symbian Blog)] 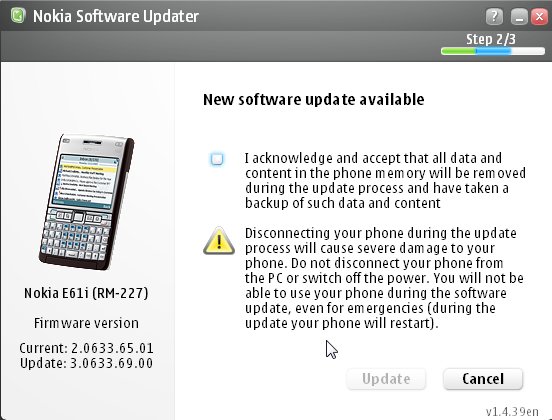 Initial impressions are that v3 is faster in general. Of course, this is partly because the firmware update  zapped the contents of the internal disk and everything's optimal, but I'd wager that there are some performance optimisations in place as well.

Things that aren't here, btw, include Flash Lite 3, I'm guessing there's not enough oomph or RAM for this.

PS. Thanks to kflyer for the tip-off