Skype for mobile in beta - runs on S60 and UIQ

Skype has released an official mobile client. The application is written in Java so it should run on a variety of phones including both S60 and UIQ phones. The application uses an Internet connection for status and contact information and for Skype chat (instant messaging). However while the application does allows you to make calls, it routes them through the PSTN (phone) network rather than over the Internet. This means you will be charged for both incoming and outgoing calls of any type. Read on for more.

The Skype application can be downloaded from www.skype.com/m (the easiest install method is to visit this URL on your phone).

The application has the standard Skype contact list. From here you are able to select contacts and initiate calls or chat sessions. You can also add or remove contacts and set your status. Pressing right on the direction pad takes you to screen that allows you to initiate a Skype Out call and pressing right again takes you to a list of ongoing chats. 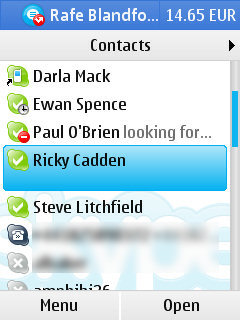 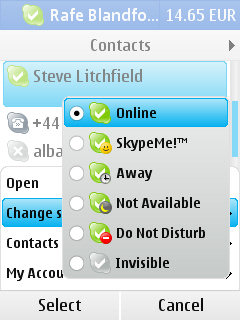 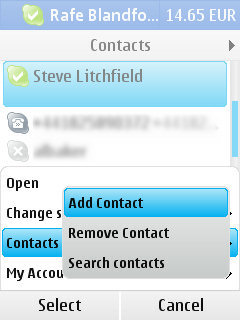 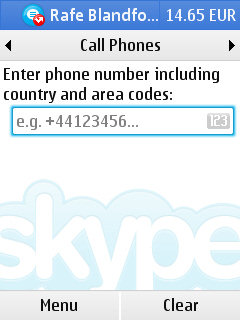 When you initiate call (be Skype or Skype Out) the application makes a local voice call to a server which then routes your call over the Internet (i.e. takes it from the PSTN network and transfers it to the IP network). Thus the Skype Mobile application is not a voice over IP (VoIP) solution. Similarly incoming calls are routed to your phone over the PSTN network. Skype will have chosen this method to solve both the bandwidth (especially in 2G areas) and latency issues that are typical of mobile data connections. This is the same method that iSkoot uses (it is not clear whether Skype have licensed iSkoot's technology or developed their own).

From the perspective of the user the application makes a standard voice call when calling out as shown below. An incoming Skype call will appear as a normal incoming call.

A local number is used for both outgoing and incoming calls. Incoming calls are paid for using your Skype credit while outgoing calls will be billed by your operator (though may come out of your inclusive call allowance). 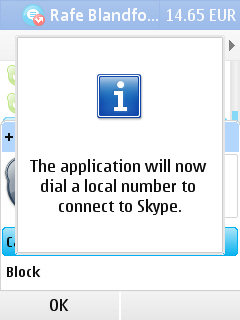 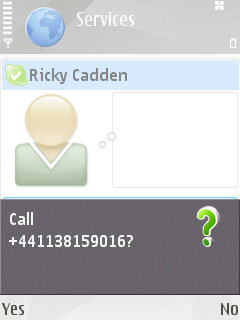 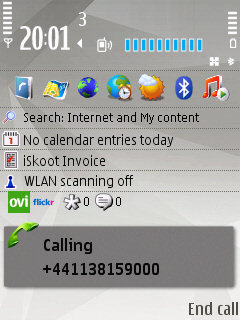 I did some testing with Ricky of Symbian-Guru and Steve. I was able to make and receive calls to land line and mobile numbers using Skype Out. I was also able to call a Skype contact, but only if they were on a PC. Mobile to mobile Skype calls resulted in an engaged tone. This is a beta application so there are bound to be some kinks to be worked out.

The voice quality of the calls isn't all that great. Skype Out calls to landlines were acceptable, but Skype to Skype calls seemed to be of lower quality. While it was perfectly possible to hear the other end the quality was noticeably poorer than a standard mobile call. Subjectively I'd say the quality of Skype calls made through Fring are better. However neither of these match the outstanding TruPhone VoIP service (who must do clever things with their audio codecs).

The Skype application also supports Skype chat sessions (instant messaging). The application will alert you with a beep (providing the application is running) when a new message arrives and there's support for multiple chat instances. 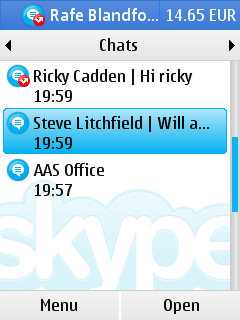 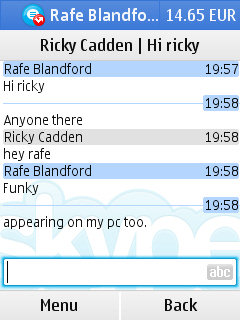 Because the Skype application is written in Java the text entry interface is slightly cumbersome on S60. As with other Java applications a separate window is opened for entering text. The chat functionality includes the ability, via the menu, to add extra participants to a chat and set the chat topic. 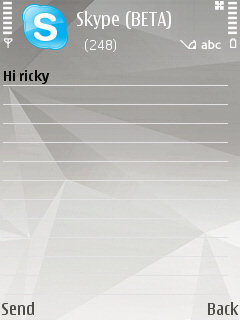 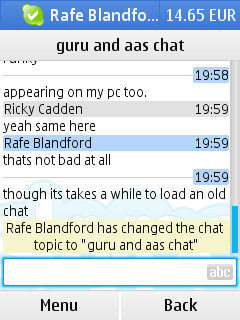 I also tested Skype on the Sony Ericsson P1i and it works fine. However there is a slight problem with text entry - when starting a chat message (or entering log-in credentials) you need to press a number key (as if you were entering text T9 style). This is a bit fiddly, and not immediately obvious, but is not a major concern (this is a beta). Obviously this problem will not apply to the W950 and W960. Hopefully the text entry issue will be fixed in a later beta. The application also install and runs on the Motorola Z8.

Overall first impressions are good - the application feels particularly slick for a Java implementation (fast loading and few delays). However as we noted above there are a few problems, most notably with call quality, but given this is a beta room for improvement is to be expected.

Outgoing calls are limited to those in Brazil, Denmark, Estonia, Finland, Poland, Sweden and UK. Incoming calls and chat should work in all countries.