While the N96 takes the plaudits, Nokia's N78 is probably going to be the bigger seller. With all the high spec features of the Nseries range (including assisted GPS; Carl Zeiss 3.2 megapixel lens with LED flash; and a 2GB ‘pre-fitted' memory card), but in a more traditional candy bar shape, along with an integrated FM transmitter, to pass out your music and video to a nearby radio (eg in a car). 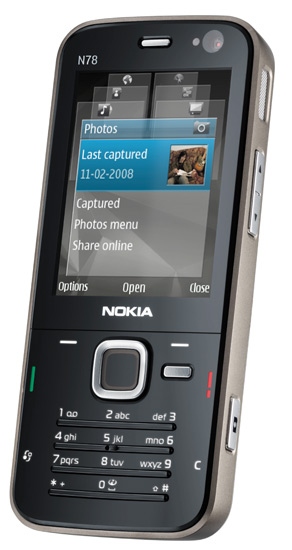 What is clear is the consistent style of the latest Nseries devices has been decided on. With a Multimedia Menu Button and NaviWheel, the physical interface started on the N81 has carried on into the N78 (and the N96), which should please software developers (and give the N-Gage developers some consistency as well). The candy bar format of the N78 is likely to go down very well in a number of territories, including America.

This also appears to be the ‘basic' Nseries device which will be in the lower reaches of the price range, helping to get Nokia's ideas of the new mobility to the internet to the mass market.

Will be shipping in Q2 2008 at roughly 350 Euros before tax or network subsidy.