Sebastian Jedruszkiewicz has released the first version of emTube, a freeware YouTube client application. emTube allows you to browse (by search, by featured video, by top rated videos and by most viewed videos), view and download YouTube videos or play back a locally stored file. It is an impressively polished application for a first release and is the best YouTube/FlashVideo solution for S60 phones I have seen thus far. Read on for screenshots and more details.

emTube allows you to easily access any YouTube video and have it playing back on your phone in a matter of seconds.

Two version are currently available from the emTube version - one is specifically for the N95 and takes advantage of the built in accelerometer to automatically rotate videos into full screen mode when you turn the phone. I've no doubt this will be a popular application and it is a great way to demo the power of an open software platform phone to family and friends down the pub. 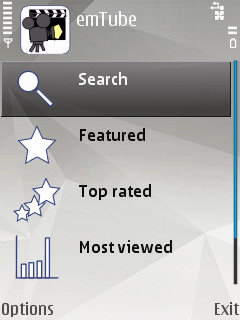 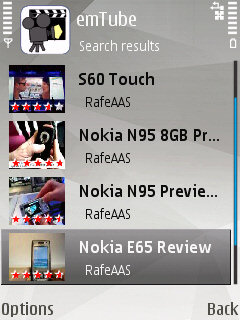 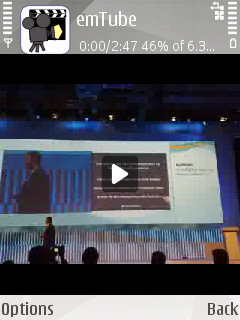 The application runs on all S60 3rd Edition phones, but you may find that real-time video playback is not possible on older devices. More recent devices such as the E65, N93 and N95 should work fine. I tested  the application on the N95, there were a few stutters, but generally the video was smooth, and is one of the best mobile FlashVideo player implementations, in terms or quality, that I have seen. emTube allows you to watch videos as they are downloading - after an initial pause for buffering you can start playing the video as the rest of it downloads.  As usual with video downloads, they're best done over Wi-Fi, and there will be longer pauses before playback on 3G and (of course) GPRS/EDGE.

Aside from the basic video browsing and viewing functions, there's an impressive level of functionality in emTube, considering this is a first release. You can download a video to your phone's internal memory or memory card. emTube can be used to play back locally stored flash video files. You can also add a video to your favourites list as a way to quickly get back to videos you want to watch later. 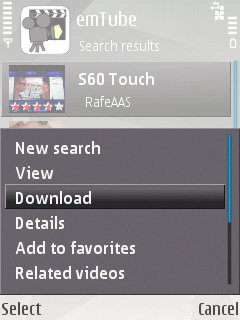 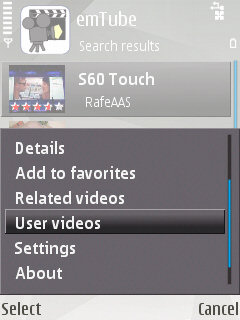 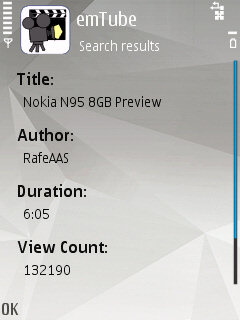 The application also operates perfectly in landscape mode. Videos can be played back in landscape ('full screen') mode. The N95 version the application will use the accelerometer to automatically rotate the video (and put it into full screen mode) when you turn the phone. It is a neat touch and is typical of the thought that has been put into this application. For other phones there is a menu entry (or press '1' for a keyboard shortcut) that does the same thing. 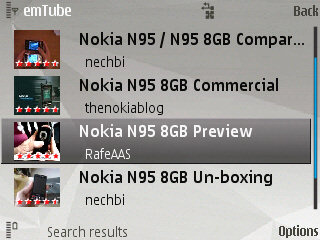 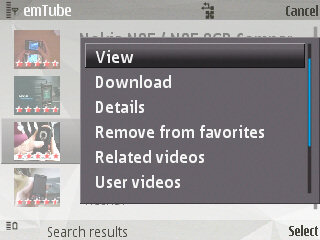 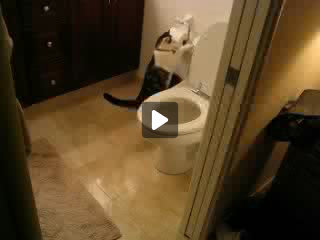 It also great that the author has put together a comprehensive web site and PDF documentation for the application. This is something I would like to see more of for freeware applications.

The application has made use of Symbian PIPS to port part of ffmpeg to the Symbian platform. It is used to decode the video (H.263) for playback. This is one of the first mainstream (i.e. likely to be popular and widely used) uses of Symbian PIPS that we've seen in a publicly released application.

Developers may also like to note that the source code for the video element of this application, libavcodec and libavutil (part of ffmpeg) is available on the authors web site.

emYube is available as freeware, but the author asks for donations if you like the application, please do your part - I just did!