Nokia has announced 'Comes With Music', a revolutionary program that enables people to buy a Nokia device with a year of unlimited access to millions of tracks from a range of artists from Universal Music Group (more publishers to be added). After the year is up, you still get to keep the music, too, on that device at least.

In practical terms this is a music subscription that is bundled with the cost of the device allowing for a consumer perception of a device that comes with unlimited free music. For  more commentary read on.

During the event the company announced Nokia Comes With Music, a revolutionary program that enables people to buy a Nokia device with a year of unlimited access to millions of tracks from a range of great artists - past, present and future. Once the year is complete, customers can keep all their music without having to worry about it disappearing when their subscription is over.

Nokia's new 'Comes with Music' offering is definitely creating a buzz at Nokia World. The move to subscription based digital music is clearly a coming trend, but Nokia and Universal have certainly thrown down the gauntlet by extending the the playback of music beyond the expiration of a subscription period and building the subscription cost into the device itself.

The 'music included with device' model may prove to be very sucessful as it is a neat solution to the problem of illegally downloaded or shared music and the pricing model should also be very popular with consumers (most will perceive the music to be free). Universal feel that the new model is the answer to the conundrum facing the music industry, that it will arrest the decline in mature markets and stimulate the market in developing countries. Traditional 'buy per track' music stores may diminish in importance. It is early days and currently only one label is signed up to Nokia's initiative but it is only a matter of time before other come on board.

It is worth noting that DRM is not going anywhere in this new world, but Universal hope it will 'no longer be a stick to beat them with' arguing that subscription services are not possible without DRM. This is a fair point, but it will inevitably disappoint some. However it is likely that it is something that the majority of people will accept it if it takes them away from a per transactional model and the concept of ownership changes.

While Nokia may hope to drive additional music downloads after the subscription period is over (or possibly subscription renewals). However it is also possible that it will also drive more device sales as people buy a device to 'get a new subscription'. That is a good thing for Nokia since profit margins on devices are likely to be higher than a revenue shared music service for at least the immediate future. "We set out to create the music experience that people are telling us they are looking for - all the music they want in the form of unlimited downloads to their mobile device and PC," said Anssi Vanjoki, Executive Vice President and General Manager, Multimedia, Nokia. "Even if you listened to music 24 hours a day, seven days a week, you would still only scratch the surface of the music that we're making available. Comes with Music fulfils our dream to give consumers all the music they want, wherever they want it, while rewarding the artists who create it."
The program will launch with Universal Music Group International, and Nokia is in discussion with the remaining major international labels.
Universal Music Group International Chairman/CEO Lucian Grainge was at Nokia World to launch the program with Nokia. "It's fantastic to work with Nokia on Comes With Music," said Grainge. "We feel it's an innovative way for people to discover and enjoy new artists, while at the same time having access to the amazing depth of the Universal catalog. Comes With Music allows our artists to reach new audiences in a very easy and affordable way." 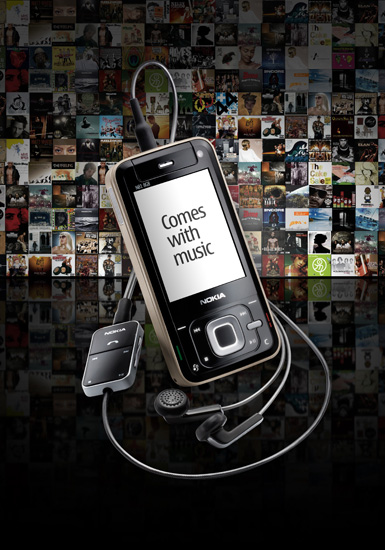