Google has created a version of its Google Maps application for S60 3rd Edition phones. Google Maps is now a native Symbian OS 9 application, which gives better overall performance compared to Java version. As an added bonus, the application now supports the use of the internal GPS in relevant phones; allowing you to see your current location. Read on for plenty of screenshots and a quick run through of the features.

[Steve: I'd been hitting refresh on the GMM url for weeks, but Ricky Cadden beat me to it - heh!]

As a native Symbian OS 9 application, Google Maps for Mobile now has better performance. The most noticeable improvement is in load time, but moving around a map and basic operations are also faster. The main limitation is the speed of the connection, not the application itself. All map data is downloaded over the air which could have an impact on data bills for those not on unlimited data plans. Another advantage that is less immediately apparent is the fact it uses a lot less RAM during operations which should mean it has less of an impact on multi-taskers. 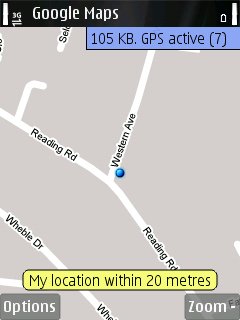 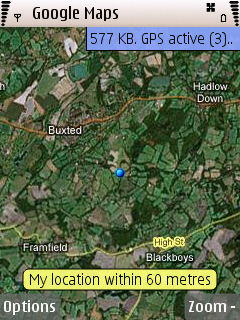 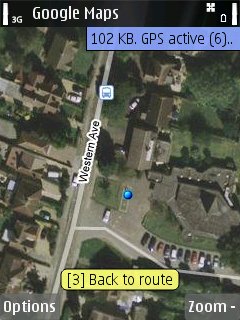 Being able to jump to an aerial view, in exquisite detail, of your current location, more or less anywhere in the world, without lifting a finger or giving the software any manual help, is MAGICAL. You get lost, you open your N95 (or E90 or 6110, etc) and you're almost instantly shown where you are and, after a couple more keypresses, given explicit directions to get home, overlaid on a traditional street map or the respected Google Maps satellite view.

And all this functionality is totally free. Take a deep breath, though, as there's more. 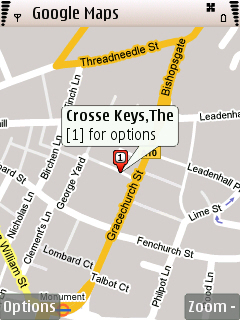 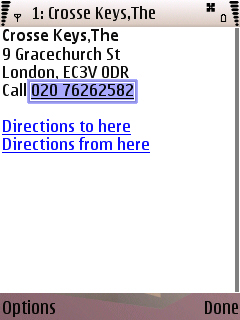 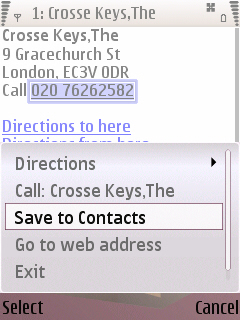 There are the familiar search options for finding a specific location, and extra information (such as address and telephone number) can also be accessed. A really nice touch is the integration into Contacts and Web. You can also get directions to a given place or call the telephone number from within the application. 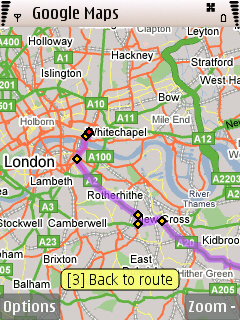 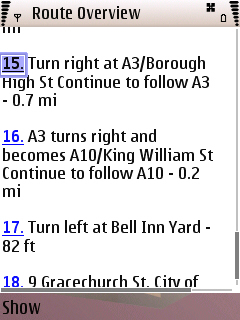 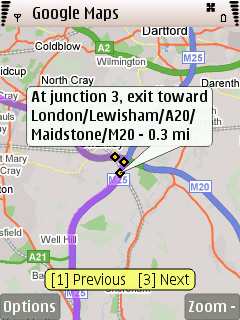 The application also allows you to get basic driving directions, as shown in the screenshots above. 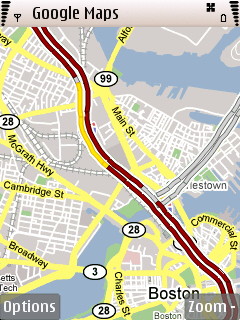 You can also, for select areas, see on-screen indications of current traffic conditions.

While Google Maps does not quite match the feature set of the fully subscribed Nokia Maps (no auto-advancing, voice guided, turn by turn instructions, for example)  it is ideal for those looking for a simple to use mapping program with GPS support. It's certainly one step up from the also-free Yahoo Go 2.0, which runs under RAM-hungry Java and doesn't have the same integration with the S60 applications.