I'm sorry, I just can't help it. It's 'The Emperor's New Clothes' all over again. But.... "What's the fuss all about?" Push email. The term has become a tick box feature that every new smartphone HAS to have before it's taken seriously. No push email? No good for a professional then. What rubbish. Read on, and then have your say in the comments!

The idea is that whenever a new email comes in, you'll see it immediately on your smartphone without having to lift a finger to 'check' for email. And, while I salute the idea as being generally a good thing, there are a number of points which are often overlooked about 'push'.

Now, all modern S60 and UIQ 3 smartphones already contain very sophisticated functions for collecting your email automatically, it's all built into Messaging. So every 30 minutes or so (typically), on the days you specify, during the hours you specify, your emails (or just headers, or messages under a certain size) will all be grabbed for you. So Messaging will stay (almost) up to date. And for free, it's all built-in.

Ah, but the devotees of push email say, but your emails might be as much as 30 minutes out of date! Err.... we're talking about email here, the original time-independent communications medium. An email might take hours to get from A to B, depending on what's happening around the Internet. And the whole point of email is that you want the person to get it but it's not critical exactly when it's read. Certainly not to within a few minutes, anyway. After all, if the message was that important, you'd have telephoned and spoken in person. 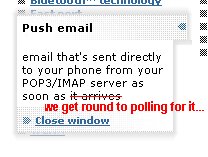 Another issue is that push email very often isn't true push email at all. OK, if you're part of a big company set up, with an expensive Microsoft Exchange or Blackberry server, then perhaps your push email really is pushed out within seconds of it arriving. But many so-called push systems are piggybacked onto existing POP3 and IMAP mailboxes, each of which has to be polled every 10 or 15 minutes for new messages, before these then get sent out to your smartphone. So there's still a delay, just as if you'd gone with the built-in S60/UIQ solutions in the first place - except that there's now one more thing to go wrong.

Most of all though, and assuming the technology is working OK in the first place, there's the issue of whether you and I really need push email. The term 'Crackberry' has worked its way into popular culture, describing someone who's so addicted to viewing and replying to emails the instant they're received, that they respond on the toilet, during mealtimes, in the middle of the night, etc. Again, email is supposed to be time-independent, i.e. it's not suppose to interrupt whatever the recipient is doing. If it does interrupt, as it does with a Crackberry, then you might as well have phoned them in the first place.

Surely checking email should be done when it's convenient to you, in the same way as you'd check what's come through the letter box in the front door, only a little more often? While out and about, every hour or so I glance at my S60 smartphone's Messaging application. It'll show me a little icon if emails have been retrieved and I can instantly see what they are and open and respond to them. All in my own time and when convenient, fitting email handling in around other, more important things in life.

The thought of being beeped or flashed every 2 minutes just because another mailing list reminder, shopping follow-up or Viagra sales pitch has entered one of my online mailboxes would, quite literally, drive me up the wall.

What do YOU think of push email and the hype behind it? Comments welcome!