Today is N8 day here on AAS, launching with the news that, now available in most markets for the Symbian^3 generation devices like the Nokia N8 and E7, most of which have been successively upgraded and should now be using Belle Refresh firmware, is a 'Upload to SkyDrive' enhancement. This is a much expanded version of a photo uploader which appeared briefly a year or so ago. In this case, your contacts are also (optionally) uploaded to Microsoft's free cloud service. Screenshots and details below. Taken with the Nokia Suite changes in the last year or so, it seems that Nokia really is trying hard at last to help Symbian die hards transition over to Windows Phone and Microsoft services. How's it doing? Your comments welcome.

The number one thing that people worry about when switching phones is bringing their contacts across. Now, while there are actually many ways to do this, not least via Nokia Suite or a dedicated wizard inside each of Nokia's Lumia devices, this new uploader facility is to be welcomed. The more options and the more data backups the better, in my view.

Of course, whether Nokia manages to convince N8 and E7 owners that moving to the company's Windows Phones is a step forwards is another matter, but this new tool is at least noteworthy. 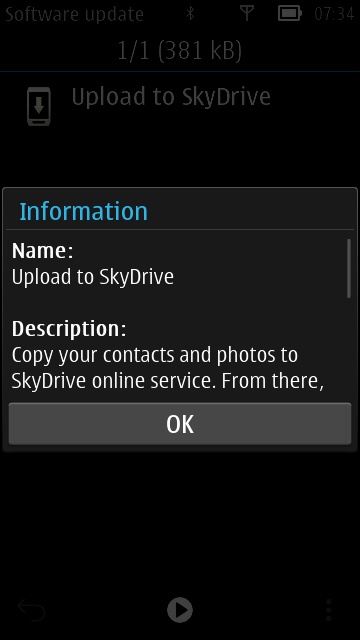 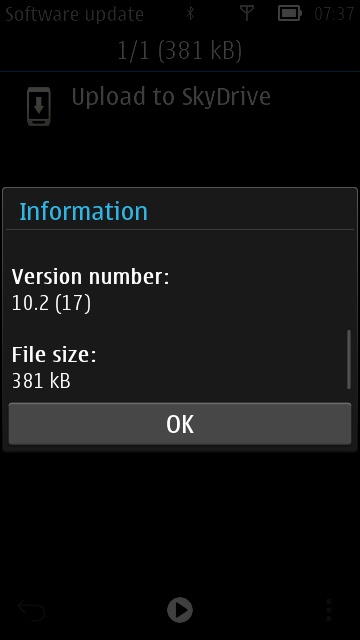 The new facility appearing in 'Software Update', in this case on the Nokia N8 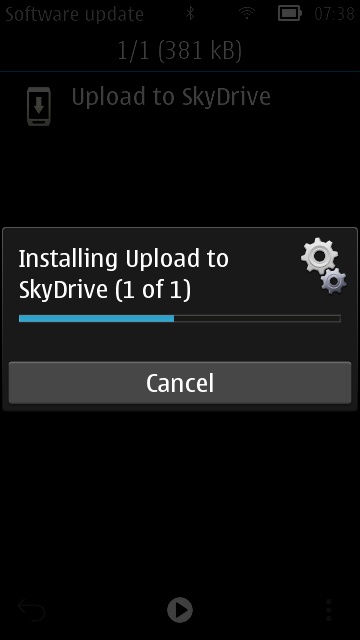 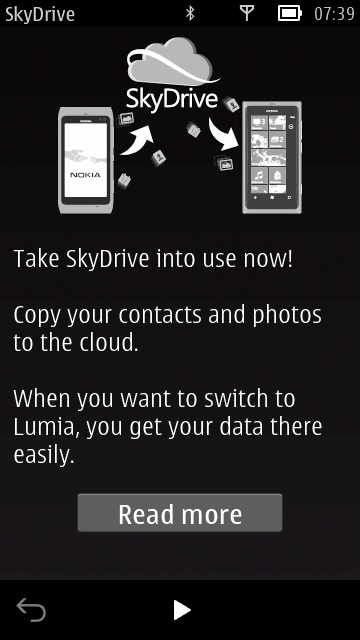 This installs in the usual way and then launches into a wizard, shown here, clearly showing a generic N8 or E7 being used as the source of contacts and photos for a Nokia Windows Phone, all via SkyDrive upload 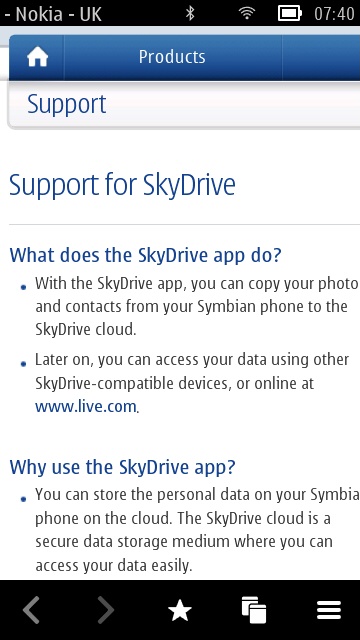 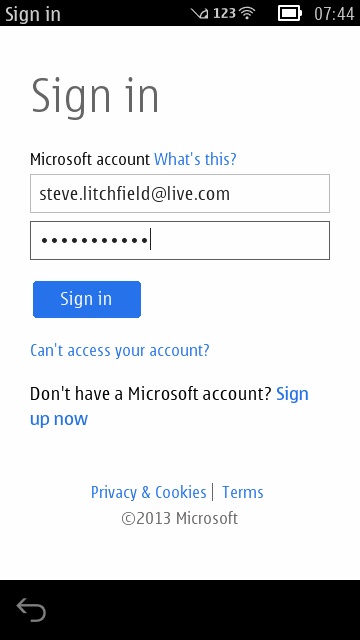 Tapping through the 'Read more' link brings up a support page on nokia.com, as shown left; proceeding with the wizard (right), you're directed to a SkyDrive login page - enter your Microsoft credentials or sign up for a new account, if needed 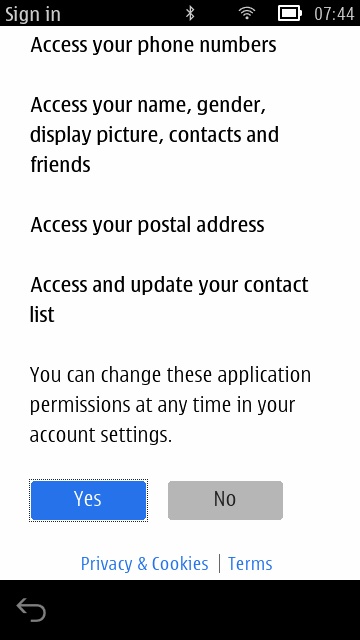 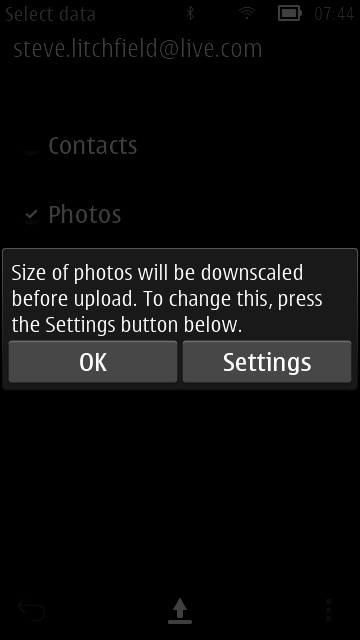 A familiar cloud authorisation dialog (left); an initial check with you about photo uploads. 'Downscaled'? The horror! Many people will want to dive into the offered Settings.... 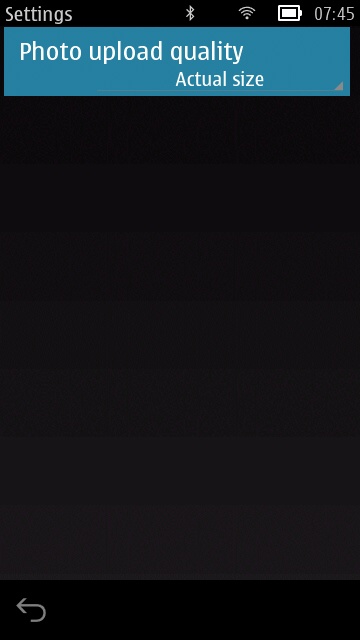 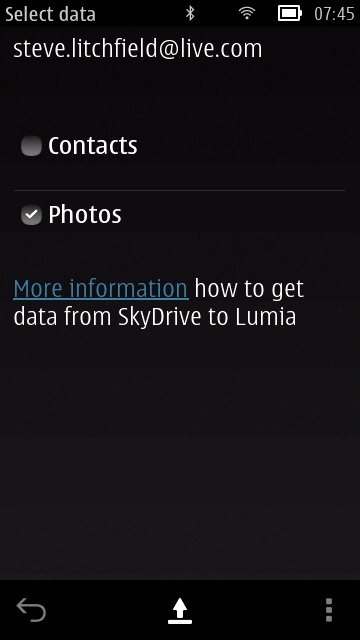 The degree of downscaling is horrific - 719 x 719 pixels max, so 2004 resolution levels, so you're best off opting for 'Actual size', unless you know you've got many hundreds of photos and limited SkyDrive space. By default, new users get 7GB of free space, enough for a couple of thousand uploaded images, though if you've had a SkyDrive account for a while, you've probably got the 'grandfathered' 25GB capacity, in which case space absolutely isn't an issue. (Right) By default, your contacts aren't uploaded, but I can see no downside to ticking this box - more backup copies of your contact set are surely better? 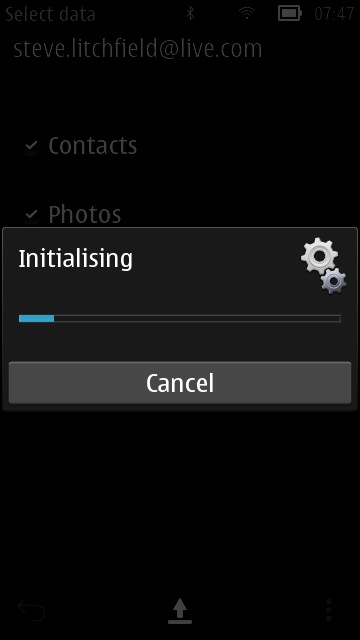 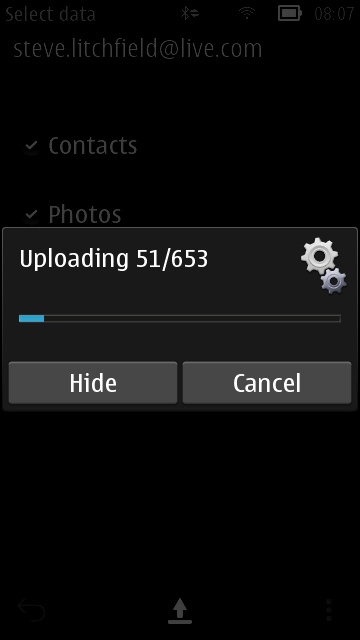 There's then a fairly long 'Initialising' phase, during which your contacts are parsed and packaged (this was over five minutes in my case), followed by the upload of your photos - again, this took a while, with 258 contacts and 395 photos in my case, the latter all at full 12 megapixel resolution. Ah well. You might want to plug into the mains or at least check that you start with a full battery. There's no mention of requiring Wi-fi, but I suspect that this is mandatory, given the size of the uploads.

After uploading, you can browse your uploaded photos by going to skydrive.live.com in any desktop browser or on your Windows Phone by going into 'Photos>albums>Camera Roll from SkyDrive'. And from there, to sharing with others or saving locally on a new device, of course.

The Contacts handling is worth commenting on, in that only 258 contact records were uploaded of my 800 or so contacts. However, I've a fairly full set of contacts on live.com already (from my Windows Phone experiments) so it's likely that a full sync is being attempted and that the system reckoned that 258 entries were different enough to be worth amending/uploading. I did see this note (below, right) in the online help page: 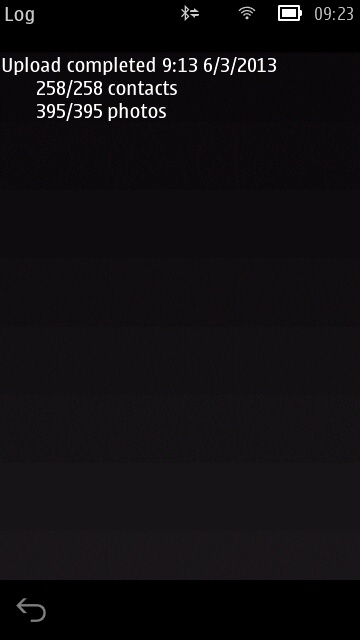 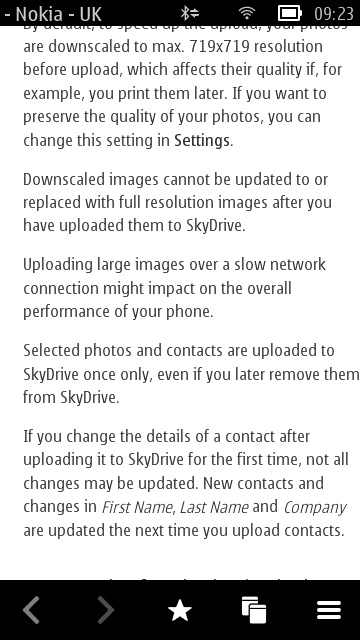 In other words, note that:

Despite the caveats and notes above, this may well still be a useful big first step to someone who has decided to experiment with switching from Symbian to Windows Phone. You can check for, and download 'Upload to SkyDrive' by simply going to 'Software Update' on your 2010/2011 Symbian smartphone. Happy uploading!